[send private message]
This page has been accessed 60 times.

March 20, 1826 letter from Joseph Watson to Benjamin Morgan and Joseph Bennet Eves concerning the kidnapping of five African American children from Pennsylvania. Watson requests that Morgan and Eves receive the children who were recovered by J. W. Hamilton and John Henderson and secure them safe passage home.

An atrocious act of kidnapping took place in this city in the month of August last, by which means, five colored children from 10 to 14 years of age were carried away by a gang of kidnappers. One of the boys was murdered by Ebenezer F. Johnson, who held them in possession; one of them was sold by him at Tuscaloosa, Alabama, and the remaining three were rescued from him by J. W. Hamilton, and John Henderson of Rocky Spring Mississippi, together with a black woman kidnapped from the lower part of the state of Delaware. These four kidnapped persons I have requested to be sent home by the way of New Orleans and when sent there to address them to your care and have to beg that you will procure them a safe passage to Philadelphia on the best terms you can procure as this expense will be paid by a few humane persons here whose feelings have been deeply interested by the atrocious conduct of this gang of miscreants, some of whom I calculate[?] to lay my hands on speedily as they have been demanded of by the Governors of five states as fugitives from the justice of this state. I am exceedingly anxious to get back the children and the negro woman as witnesses to convict the kidnappers. Inclosed you [will find] a letter from Mr. Henderson and from J. W. Hamilton to me showing the groundwork of the business. Three Bills of Indictment have been found by the

Grand Jury of the County of Philadelphia against Joseph Johnson, Thomas Collins, Ebenezer F. Johnson, [and] John Smith alias Spencer Francis. These men have as I have before stated to you been demanded as fugitives by our Governor Shulze. You will particularly oblige your friend and service the cause of humanity by aiding these unfortunate blacks in the way pointed out.

Requested them to open an immediate correspondence with Hamilton and Henderson, at the earliest, if they fill freedom.[???] 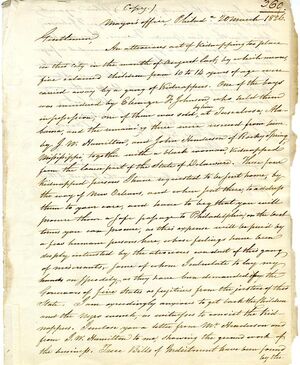 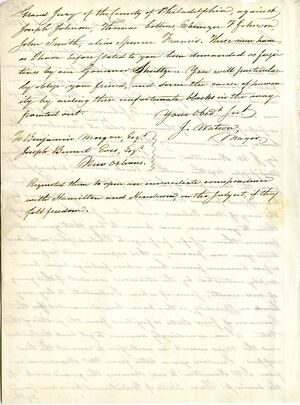 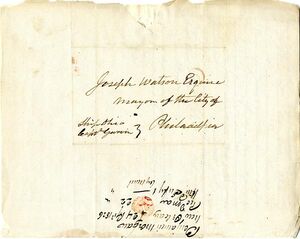