[send private message]
This page has been accessed 573 times.

Though this event began in Illinois, Hedrick, Indiana was hardest hit as farms and houses were leveled and 11 deaths took place. The tornado displayed rapid and unexpected growth as it approached the village. The tornado then dissipated just three miles later northeast of the town. [1]

"The tornado nearly destroyed Hedrick on 17 April 1922. The storm cut a path through the town an eighth of a mile wide, killing four residents, destroying six homes and ten businesses, and leaving only three buildings intact. Following the storm, newspapers estimated from ten to fifty thousand people flocked to the area to view the destruction, prompting the governor to deploy part of the state militia to control the crowds and prevent looting."[3]

The storm struck Alexandria, Orestes and Summitville and was a part of the tornado that cut a wide path across Indiana late today. Later reports placed the death toll in Madison county at six. The known dead are Charles Ludlow and David Hughes, farmers living north of Alexandria. (News Article) Date: 1922-04-18; Paper: Philadelphia Inquirer.[4] This storm moved from Orestes to northeast of Wheeling. Several homes in Madison and Delaware counties were flattened. A post card from one of the homes near Orestes was later found in Mount Cory, Ohio, 124 miles away, with only a torn corner. [1] 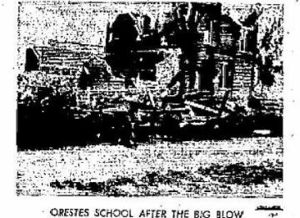 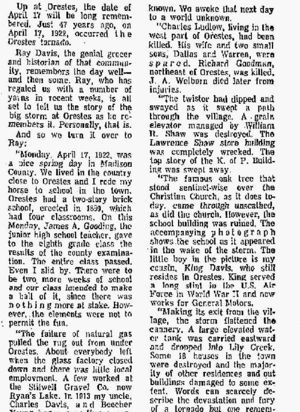 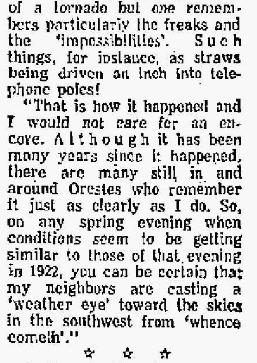 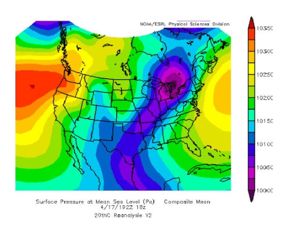