[send private message]
This page has been accessed 2,955 times.

This page is dedicated to all the brave men who were held in captivity in POW Camps in North Vietnam during the Vietnam War.

The Crest for the 4th Allied P.O.W. Wing has significant parts. There is an individual number for each of the wars. The 1st Allied P.O.W. Wing is the Prisoners of War (POWs) in World War I. The 2nd is POWs in World War II. The 3rd is POWs in Korea. The 4th is Vietnam. There is a 5th Allied P.O.W. Wing which has now been formed for desert storm POWs. The reason it says Allied is because it was an allied group who fought the Communist forces there. The United States of America was joined by South Vietnam, Thailand, South Korea, Australia, New Zealand, Philippines, Kingdom of Laos, Khmer Republic (different from Khymer Rouges). Most of the POWs were from America and South Vietnam, Philippines, but there were also civilians from Germany and America, missionaries, and others. The same holds true in the other wars mentioned. South Vietnam's flag is represented by the red and orange stripes. Thailand's flag is there in the red, white and black. The United States' flag is represented by the red and white stripes and the blue banners and background of the number. Notice the beautiful eagle who has broken his chains and is winging his way to freedom. Return with Honor was what they told themselves over and over every day and the men on this page all did that.

The Hỏa Lò Prison was the main prison used by North Vietnam for prisoners of war (POWs) during the Vietnam War, it was known to American prisoners of war as Hanoi Hilton and it had other parts to it that they named New Guy Village, Little Vegas (there were breakdowns for sections of Little Vegas using Las Vegas Hotel names), Heartbreak Hotel, Unity. The Hanoi Hilton was one site used by the North Vietnamese Army as a POW camp, where the captured servicemen were tortured and interrogated, mainly American pilots shot down during reconnaissance missions and bombing raids. Although North Vietnam was a signer of the Third Geneva Convention of 1949, which demanded decent and humane treatment of prisoners of war. The North Vietnamese refused to recognize them as POWs. The men were called Air Pirates instead. The Vietnamese routinely used horrific torture methods, such as rope bindings of arms, legs and manacled wrists to cut off circulation to the arms and hands which rendered them useless. They also put men in irons, used sleep deprivation which included leaving bound men in one place for days and not allowing them to relieve bodily functions. Savage and terrible beatings, and long solitary confinement sometimes lasting numerous years.

The Vietnamese brought in Cuban military men who taught them different torture techniques and during that time some men died from the beatings. There were three Cubans, but the most brutal was a big man they call Fidel. Until the end of the war, the men were near starvation and there was little or no medical aid. Even on the rare occasions when aid was rendered, it was so primitive that the men often died or became gangrenous due to the filthy environment. They literally saved each other's lives with what knowledge they had of first aid and modern medical techniques as often as they were able. The aim of the torture was often not to gather military information, it was to break the will of the prisoners, both separately and as a group and to try to get the men to sign confessions ie. bombing hospitals, women and children and old folks, schools, churches and holy sites. The men still managed to get messages out through Morse Code and other expressions during propaganda pieces filmed by the enemy and sent out to the rest of the world. During all of this depravity, the prisoners tried to maintain their sanity by learning to communicate by a tap code between the walls of cells and later, at the end of the war, when they were put in large cells together, they taught each other everything they knew. Amongst these very highly educated men were people with skills in languages, sciences, arts, music and religion. Some guided with deeply ingrained spirituality or psychological counseling when people were at their lowest.

Other POW Camps in North Vietnam

Dictated by ex-POW Michael Kerr to wife Darlene Kerr. The "confessions" that sometimes the Vietnamese would have the POW write himself and/or they would give the POW one already written were doctored by the Prisoners when they could to make them sound ludicrous. For example, one of the United States Navy pilots "confessed" that he had heard/known 2 United States Naval Aviators who had refused to fly in Vietnam and he named them. One was Clark Kent (Superman) and the other was Ben Casey (fictitious Hollywood doctor in TV and movies). This confession was read at the Bertrand Russell War Crimes Tribunal held in one of the Scandinavian countries and all of the reporters who understood American comic book and TV names started laughing and got up and walked out of the room. The Vietnamese were highly embarrassed and the Naval Aviator was severely punished. The Vietnamese interrogator known as "The Rabbit" told me I was going to write a confession after a particular session of torture and I told him I didn't have anything to confess. He got a copy of the Naval Aviators confession and told me to use it. So, I copied it verbatim except using United States Air Force Captain Bruce Wayne (Batman) and Lieutenant Charlie Brown (Schultz Comic book character) because I couldn't remember the regular name of the character Robin who is Batman's sidekick. The Naval Aviator had been a person who dropped bombs. I took pictures. I flew Reconnaissance missions. The Rabbit was furious. He threw it back at me and said, You did not drop bombs. You took pictures which showed the bombers where to bomb. Change it. So when I changed it, I said that I could see from 10,000 feet in the air, at night, women, children and old folks (these were the standard words they always used) looking up at the sky with candles that lit up their faces showing fear and horror. Right! From10,000 feet at night all you see are lights. Certainly not candle lit faces. You can't see people.

Memories: 1
Enter a personal reminiscence or story.
Darlene (Scott) Kerr
John Michael McGrath, better known as Mike, just posted an interesting set of facts for the POW network. Mike is the NAMPOW Historian and was also a POW. His recent audit of light attack aircraft lost from just one base, Naval Air Station Lemoore in California shows that there were 259 loses of pilots and aircraft during Vietnam from that base.

60 were POWs (5 died in North Vietnam Camps. They were JJ Connell, Ken Cameron, Richard Hartman, Homer Smith and Jim Walsh.) 104 widows did not see their husbands return. From just one base! McGrath does this type of research all the time and is relentless in his search for missing facts. We thank him for this greater knowledge. 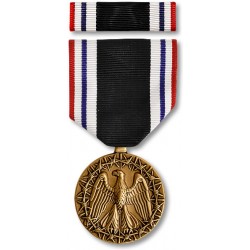 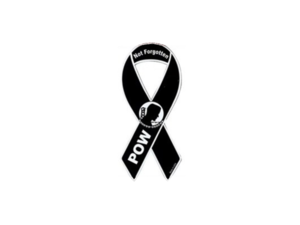 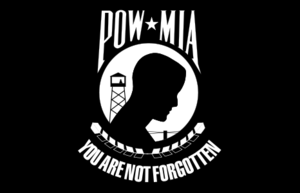 The Hanoi Hilton in a 1970 aerial surveillance photo. 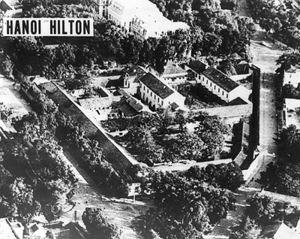