[send private message]
This page has been accessed 357 times.

Soon after Lolly was married in Shanghai, China on June 5, 1936, Laura gave up the house in Victoria, stored the furniture, and with Fantan, joined her daughters in Shanghai, as Laura was especially interested in meeting her new son-in-law and to see her daughters again. Laura stayed for 18 months and was able to orchestrate Margie's wedding from Lolly & Cliff's home.


ARCHITECTURE: This two-storey, side-gabled Gambrel-roofed house, rare in Victoria, has an unusual front gambrel gable on its symmetrical façade. The front gable has a semicircular window above three six-light windows. There are two shingled, shed-roofed dormers with shingled balconies on either side of the front gable. Both balconies sit on the verandah roof. The roofline of the verandah continues around the sides as a belt course. The full-width verandah has six heavy Tuscan columns and an almost- Eastlake-style balustrade. There are stepped balustrades on either side of the wide front stairs which lead up to the Colonial Revival-style doorway with fanlight and sidelights. Two full-height brick chimneys are located on the left and right sides of the house. The house is clad in shingles. It was listed in the Daily Colonist in 1903 at $2,000.

ORIGINAL OCCUPANTS: 1901-11: Arthur Holmes Pigott (1868-1932) and his wife Mildred first paid taxes on the property in 1901, after immigrating from England. Arthur was secretary manager of Victoria & Vancouver Stevedoring Co, and president of Dunwell Mines, during that company’s development. After their divorce, Arthur remarried in Vancouver in 1920, to widow Winifred M. Howard (née Davis) Gibbon. Arthur retired in 1927 and died in Deep Cove.

OTHER OCCUPANTS: 1925-36: Laura Martin Fraser (née English), widow of Bank of Montreal manager James Sutherland Chisholm Fraser. The Frasers were married in New Westminster in 1903 and moved from Rossland to Victoria in 1912. When she died, Laura was living at Mount St. Mary Hospital, 999 Burdett Av, Fairfield: the wall is Heritage-Designated. 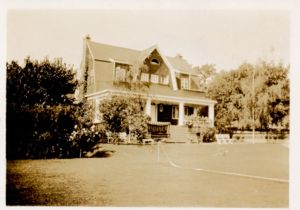 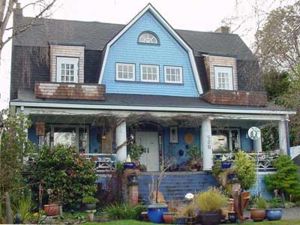