[send private message]
This page has been accessed 1,519 times.

1756 - Patrick L Calhoun with his 4 friends and families settled in this western part of South Carolina. This was first called District 96, then called Abbeville Distict and even later, Abbeville County. They were of the Scottish, or Scots-Irish, order.[1]

Another Scottish family, Alexander McAlpin and sons who settled here, served in American Revolution. Sons were Robert McAlpin, b 1757 and Solomon McAlpin (b 1762 ) and more sons and daughters.

Oct 7, 1763 Proclamation line -- a Royal Proclamation which had been issued by King George III, issued after Britain acquired French territory at the end of the French and Indian War (also known as the Seven Years War). This forbade settlement west of a line southward along the Applachian Mountains. Early settlers increased in this backcountry in the 1760's-1770's. Some came from Maryland, Virginia or Scotland (Alexander McAlpin and sons).[2]

1764 This District 96 later split into Abbeville county settlement was followed by arrival of 211 Huguenot exiles from France. The name of the district as well as the character, and strength of the settlers and institutions. This area was designated: Abbeville District.[1]

1775-1782 This Ninety-Sixth District was known to have been at the front during the war for American Independence.[1]

1777 There was a historic treaty was signed with the Cherokee Indians in Dewitt's Corner, which has become known as Due West.[1]

Abbeville County organized in 1785, ranks first among, the counties of upper South Carolina. [1]

According to Robert Mills, Abbeville promoted education for the youth.

Statistics of South Carolina
The county promoted education for the youth. Mills' quote:

"Abbeville may be regarded as the original seat of learning in the upper country, and from it has emanated that light and intelligence which manifested themselves there previous to and during the Revolutionary War. Attention to education was equal with the settlement."[4]

1832 Gold was processed and shipped from South Carolina to the United States. [5]
Slavery Slavery on the Move

Abbeville's county seat, the town of Abbeville, SC can be found 50 miles S of Greenville and 70 miles W of Columbia.[1]

1860 - This county was a hotbed of secession before the Civil war.

1862-65 Men from this district were among the front lines, and first in the Confederate war. [1]

Education - According to Robert Mills Abbeville promoted education for the youth.

The county promoted education for the youth.

Mills' quote: "Abbeville may be regarded as the original seat of learning in the upper country, and from it has emanated that light and intelligence which manifested themselves there previous to and during the Revolutionary War. Attention to education was equal with the settlement."[6]

Abbeville had 11 mines[7]Minerals uch as feldspar for porcelain and china, mica - essential for radio field and electrical areas, hiocher (basis for paint, and holler's earth - used in clarifying and whitening minerals, vegetable and animal oils and asbestos (fireproofing. Also found are iron and onyx. [1]

John C. Calhoun, George McDuffie, Langdon Cheves, the Haskells, James L. Petigru, the Wardlaws, statesmen, lawyers, judges, soldiers, and a host of other eminent men were born in this county.

1865 The last Confederate council of war was held here.

The county's transportation is via the Norfolk Southern Railroad and Seaboard Coast Line Railroad (now CSX), and parts of the county are served by the Piedmont & Northern Railway (currently known CSX). Many improved public highways take care of the automobiles in present day.
1950 Abbeville County had a population of 22,456.

Abbeville County's history is colorful, which extends back into the 1700's, while it was a colony within District 96. After the county formed, towns formed such as: Abbeville, Calhoun Falls, Donalds, Due West and Lowndesville. The county originally extended from the Savannah River to the Saluda River (which is a divider between Georgia and South Carolina on the Savannah River). Sources indicate that it was named for a French town, located 20 miles from the French coastline and ocean. Abbeville, South Carolina is situated on the Savannah River.[3]

Famous sons and daughters added their local, state and national contributions to make the Abbeville County rich in history.[3]

The Trinity Episcopal church began in 1842, then in 1859, a cornerstone was placed for the church at 200 Church Street. Included in the building with a cost of $15,665 was also an organ. Its steeple is visible from downtown Abbeville due to the steeple being 120 feet high. A cemetery was included on the church grounds where both Confederate and Union soldiers are buried.[3]

Local views and history of Abbeville's city include the Historic Square (which are reminiscent of Charleston and Savannah). Others include the Abbeville Opera House, the State Theater, many boutiques and restaurant, the Classic Hotel, many architectural homes dating back to the Confederacy, as well as musical events, and carnival rides. [13]

John C. Calhoun, (1782–1850), b Abbeville District, US Congressman and US Senator from SC, Secretary of War, Secretary of State, and Vice President of the United States

Langdon Cheves, (1776–1857), b Abbeville County at Rocky River, banker and US Congressman

Abner Smith Lipscomb, (1816–1890), b in the Abbeville District, member of the Alabama Legislature and Supreme Court Justice of Alabama and Texas.

James L. Petigru, (1789–1863), b in the Abbeville District, attorney general of SC, SC House of Representatives. He was the leader of the anti-nullificationalists in the state house.

Thomas D. Howie, (1908-1944), army officer, killed during Battle of Normandy,World War II, trying to capture the French town of Saint-Lô. He is known as "The Major of St. Lo" 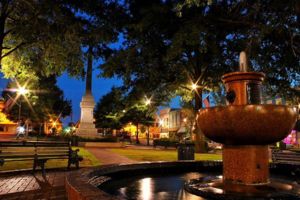 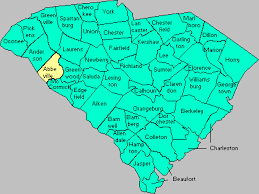 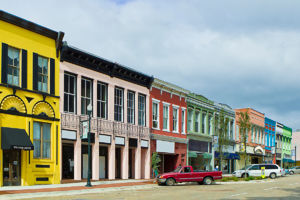 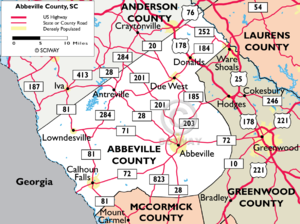 Could you please correct the category to Category:96th_Judicial_District, South_Carolina. Ninety-six District in incorrect. Thanks, Natalie