[send private message]
This page has been accessed 2,959 times.

This is a resource page for the Abercynrig Category page.

More than one publication states the estates of Abercynrig and Slwch were awarded to Sir Reginald Awbrey by Sir Bernard Newmarche (Neufmarche) for his efforts during the conquering of this part of Wales in the late 1090s. However, Welsh rebellions continued into the early 1100s. Likely the lands were not occupied by Newmarche's followers until after the rebellions were put down.[1]

As of 2020, the manor house is a rental – search “rent Abercynrig, Wales” to see a listing.

Awbrey ownership is referred to in The Heraldic Visitation of Wales by Lewys Dwnn who lists the first Awbrey in Wales as Sir Reginald Awbrey born about 1060. Abercynrig remained in Awbrey possession until sold in 1621. [2]

It is known Sir Edward borrowed £700 before 1604 from John Jeffreys using Abercynrig as collateral. The amount was equal to 70% of its value. Neither Sir Edward, nor his son Sir William, felt the need to repay the loan and keep possession. It was sold to the lender's son and heir, Jeffrey Jeffreys for a profit of 300 pounds in 1621. [2]

Ownership From Awbreys to Current

Jeffrey Jeffreys' son, Col. John Jefferys, inherited the estate and held it until his death in 1688. The estate was largely rented from the late 1600s to the mid-1900s. Col. Jeffrey’s daughter married Thomas Flower of Ireland and the estate passed to the Flower family and successively to William Flower, 3rd Viscount Ashbrook. He sold the estate for £13,460 in 1800 to Captain John Lloyd of the East India Company, originally of Dinas, Llanwrtyd, in which family the ownership remains.[3]

John Lloyd had made his fortune in the East India Company. He built a new family home, Dinas, Brecon, which was not occupied until 1828, and lived at Old Oak House, Brecon. Dinas became the chief Lloyd seat and Abercynrig was tenanted until 1941, when Dinas was requisitioned and Sir John Conway Lloyd went to live first at The Granary and then into the house itself. [4]

Aber is a common element of place names of Celtic origin meaning "confluence of waters" or "river mouth."

Abercynrig is located in Llanfrynach Parish, in Powys county (formerly in Brecknockshire county), just over a mile northeast of the Village of Llanfrynach and about 2 miles southeast of the city of Brecon. The Afon (river) Cynrig and River Usk join to form the western and northern boundaries of the estate.

Coflein, the online database for the National Monuments Record of Wales, includes the following excerpts on their page for Abercynrig:

The present house was built by a member of the Jeffreys family, probably Colonel John Jeffreys, in the 1680s and apart from the insertion of sash windows in the nineteenth century has been little altered. It retains its seventeenth-century woodwork, fireplaces and staircases, with contemporary painted panels over the main fireplaces depicting the story of Diana and Actaeon." [4]

Other Structures on the Estate

The granary was converted in the 1930s to a children's playroom and linked to the main house by a new servants' hall by the tenant, Captain W. D'Arcy Hall MC, MP for Brecon & Radnor from 1924. [3]

By 2018, the granary was being used as a rental unit. A realtor's listing states: " Available to let a ground floor apartment of a converted Granary comprising of two bedrooms, bathroom and spacious lounge/ fitted kitchen with appliances." The unit includes: 2 bedrooms, 1-2 reception rooms and 1 bathroom.

In 2016, a new rental unit on the estate is referred to as the Stable Loft. It is located across from the entrance of the manor house. The upper floor is the rental and the lower floor is a game room. 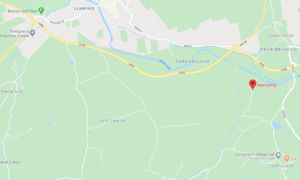