[send private message]
This page has been accessed 393 times.

A documentary/narrative view of the life of Abigail Coursonwhit, born around 1683 in New England, who married under the name Louise Cosmouette in Trois-Rivières, Québec, Canada (New France) in 1701

This is intended as an adjunct to Abigail-Louise's WikiTree personal profile: Abigail Cursonwhit

The individual known as "Abigail Coursonwhit" (born around 1683 in New England to Cornelius and Hannah Hobbs) is the same person who married under the name "Louise Cosmouëtte" in Trois-Rivières, Canada, in 1701.

Many historical sources give the date of the Salmon Falls raid as March 27/28, 1690. This seems to be due to an error in a letter of Governor Frontenac's secretary Monseignat:

An alternate modern spelling of Cocheco is "Cochecho". The French spelling "Quochecho" and English "Cochick" are also found.

Identifying Abigail Coursonwhit positively as Louise Cosmouëtte has been made difficult by the misleading documentary evidence. The record of Louise's 1701 marriage in Trois-Rivières (as written in the parish registry by Frère Élisée Crey) is a sloppy piece of work: the handwriting is poor and the entry itself is carelessly written:

Nevertheless, this record is the basis for the "official" transcription of Louise's marriage in the database of the PRDH [1], which gives the bride's name as "Louise Cosmouette" and her mother's as "Marie Meriapte":

The surname "Meriapte" is not found on any other individual in the database of the PRDH. Some researchers have speculated that this suggests Louise was in the care of a Native couple in which the mother had this unusual surname.

Fortunately, there is another official account of the union of Louise and Nicolas Gladu. This is their marriage contract, recorded in clear, legible script by the notary Séverin Ameau:

This record gives Louise's surname as Cochenouet (pronounced something like koh-shah-NWET or kosh-NWET). Louise's name is repeated several times in the document with the same spelling. Her parents' names appear only once: as "Jean Cochenouet" and "Marie Abs". Unlike the scrawl in the parish register of Frère Élisée, Ameau's writing is clear. Considering there is no French equivalent of the aspirated English "h" of words like "happy" and "Hobbs", Cochenouet and Abs are close French transciptions of the names Coursonwhit and Hobbs.

Another discrepancy is the difference between Crey's "Cosmouëtte" and Ameau's "Cochenouet", but the spelling of names in parish registers at the time was at the discretion of the cleric or notary, who transcribed names as they heard them (and Abigail probably did not know how to write or spell.)

Yet another discrepancy is that of the given names of Louise's parents as recorded by both Crey and Ameau: "Jean" and "Marie". If they were English, as recognized in both Crey's and Ameau's documents, these could not possibly be their real given names. Likewise, Louise would certainly know her own given name (Abigail), and that is not recorded in any known French-language document relating to her at Trois-Rivières.

FROM NEW ENGLAND TO NEW FRANCE

The Genealogical Dictionary of Maine and New Hampshire states that a certain Abigail Cursonwhitt (Coursin), daughter of Cornelius and Hannah Hobbs, was captured by Indians before 1695 (the first of several times that Abigail's name appears on lists of English captives) [GDMNH p. 163]. There is no documentary evidence of Abigail's capture, but the Cocheco Raid is the most likely.

The Cocheco Raid took place June 27-8, 1689 and the baptism of an English girl as "Louise" in Trois-Rivères did not occur until September of the following year. The baptism does not record the child's surname nor mention her parents. The godfather (French "parrain") at the ceremony was a French military officer. In the baptismal record the priest writes that the child was "amenée captive par les sauvages et rachetée d'entre leurs mains" (taken captive by Natives and bought back from their hands).

Abigail does not appear in the list of the captives of the Salmon Falls raid of March 27, 1690. But the recorded evidence of known captives from this 1690 raid, including Marguerite Renée Quée and Jean-Baptiste Oicbac, link her with this group.

DONATION FROM THE KING OF FRANCE

Sometime before 1703, King Louis XIV approved a grant of 2000 livres to be distributed among the known English captives living in New France who had converted to Catholicism and decided to remain in Québec. Only two of the individuals listed are residents of Trois-Rivières: Louise Corsonouït and Marguerite Key. Marguerite was born Abigail Kay.

The list of recipients of money from the King include both the name and the amount recieved [NECCC pp. 123-4]:

It's unclear why Marguerite's share of the grant (300 livres) is so much larger than Louise's (60). No other captive received more than 90.

What became of the Salmon Falls captive identified as Jean-Baptiste Oicbac is unknown. It's also unknown what his birth name was. It's been suggested that Oicbac is a French transcription of a name like Wickby.

Louise, Jean-Baptiste and Marguerite were all baptized at Trois-Rivières.

Jean-Baptiste was baptized on September 8th, 1690 and Louise two days later. The entries in the parish register are adjacent:

As with all the English captives, the parish registry stipulates that the baptisms were performed conditionally ("soubs condition", modern French "sous condition"). This is because second baptisms are not permitted; but the ceremony does represent an official "renaming" with a Christian name. In New France, children were almost always given names taken from the Christian New Testament, usually the name of a saint. During this time, New England Protestants, many of them Puritans, commonly took their names from the "Old Testament" (Abigail, Mehitabel, Samuel, etc.) English captives with New Testament names (Elizabeth, Martha, etc.) were allowed to keep them (in their French form).

There is no doubt that the "war party of 1690 commanded by Hertel" referred to in Jean-Baptiste's record is the same that attacked Salmon Falls in March 1690, Salmon Falls being in the near vicinity of the Cocheco Raid of prior year.

The fact that Louise, Jean-Baptiste and Marguerite were all baptized at Trois-Rivières does not necessarily imply that they were captured at the same time: captives of both the Cocheco and Salmon Falls raids appeared in various parts of Québec. But the fact that Jean-Baptiste and Louise were baptized at the same time and place, and both with a military officer as godparent, is significant.

Louise's godmother, Louise Boucher, was the daughter of Pierre Boucher, governor of Trois-Rivières. It's reasonable to assume that Abigail took her baptismal name from Mademoiselle Boucher.

The baptisms of two other English captives, Mehitabel Goodwin (née Plaisted), captured during the Salmon Falls raid [NECCC pp. 185-6], and Grizel Otis (née Warren, widow of Richard Otis of Dover), captured during the Cocheco raid [NECCC p. 147], are especially important. For one thing, each records the date of their capture. It's also noteworthy that the godfathers of Mehitabel and Grizel were people at the highest levels of Montréal society: Mehitabel's was Louis-Hector de Callières, Governor of Montréal; Grizel's was Jacques Le Ber, the wealthy Montréal merchant.

Grizel was baptized "Marie Madeleine" May 9, 1693 and Mehitabel "Marie Esther" two days later. Their baptismal records are adjacent in the parish register.

We have no record of Louise's activities between her baptism in 1690 and her marriage in 1701, but given her connection to the Boucher family and the Salmon Falls captives, it's very possible she was similarly employed.

There is no hard evidence that Abigail was captured at Cocheco [see FENA p. 165] , but there is a written account of the experience of one known captive, Sarah Gerrish, who would have been about ten years old at the time:

The grandfather of Sarah referred to in the passage, Major Richard Waldron, though an "affectionate" grandparent, did not endear himself to the Native population in the vicinity of Dover. He was the prime target of the attack.

On or shortly before January 7, 1702, Louise gave birth to a son, Pierre. His godmother was Marguerite Ameau, daughter of notary Séverin Ameau, who wrote Louise's marriage contract.

The burials of Louise and her unnamed child in January 1704 are recorded in the parish registry of Trois-Rivières. Some of the entries in these pages appear not to be entered in chronological order, but it's clear that Louise and her second child died in the early days of 1704:

In the short entry for Louise's burial, she is noted simply as the wife of Nicolas Gladu. She is not mentioned at all in the record of the newborn's burial. The margin reads: "enterrement d'un enfant à Nicolas Gladu qui était ondoyé" [burial of a child of Nicolas Gladu, who was "ondoyé", a term referring to the baptism of a stillborn child or a child not expected to live].

Linda Breuer Gray's "Narratives and Identities in the St Lawrence Valley 1667-1720" contains an extensive appendix with summaries of dozens of figures of the period from Québec and surrounding areas. The list includes many English captives. In the entry for Louise, Gray lists numerous variations of her name and states unequivocally that she was "captured by the Abeknakis in the attack on Cocheco (Dover)" and that she "may have been related to Cornelius Carson [sic] of Dover" [NISLV p. A-30].

The hapless waif who was born Abigail Coursonwhit in 1680's New England was taken captive and torn from her family as a child in the vicinity of modern-day Dover, New Hampshire; she was later freed from her captors only to be carried away to Canada where she was raised by strangers who did not speak her language. She was baptized a Catholic with a new identity and married according to the customs of the Church in New France. In 1702 she gave birth to a son, Pierre, who had families with three different wives and became the ancestor of all her descendants. Abigail-Louise herself passed away in obscurity with her nameless newborn child in 1704. 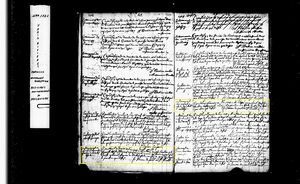 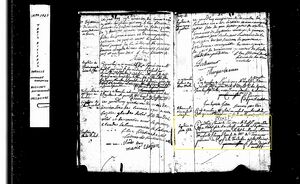 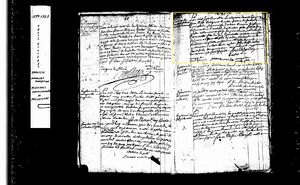 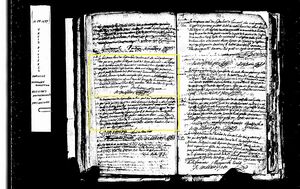