[send private message]
This page has been accessed 161 times.

This is a space for recording information about the home of the O'Reilly's and McCallum's at 115 Mein Street, Scarborough.

Pop O'Reilly is said to have bought four allotments at Scarborough on one recollection of the story for £30 each off the plan perhaps across the bar. These allotments were 113-119 Mein Street. The Brown House was placed on 113 and was a residence and rented property over its time until it was replaced by a house for Aunty Beryl. In war time a house was relocated to 115 Mein Street with the name "Hanoob" as Boonah spelt backward. This house became the home of Nanna O'Reilly until her death and the home of the McCallum family. There was a spare allotment between 115 and 119. 119 Mein Street was the holiday home of Uncle Ted and family while they were managing hotels around Queensland. When the McCallum family sold 115 Mein in 1975, the house name Hanoob passed 119. [1]

Pop O'Reilly died in 1952 with his residence as 145 Mein Street Scarborough, up the road from 115 and likely opposite the Scarborough Fun Fair. Census records show Maud living at 145 Mein Street in 1954 and 1958. Maud was living at 115 when Molly McCallum and family moved there in 1965. The house was left to Maud for the remainder of her life then to be passed to Molly. In addition to the four allotments 113-119 and 145, 93 Mein was also owned by an O'Reilly family. Six blocks, six children for Pop and Maud, it may be that Pop looked after the future of each of his children by purchasing and bequeathing a block to each. His children Patricia and Mervyn pre-deceased him. There are recollections of his children at the addresses: 93 and 119 (Ted); 113 (Pop, the early McCallum's, Frank); 115 (Maud, Molly and the McCallum's); 145 (Pop and Maud, Kevin). [2]

The 1878 title was held jointly by Charles Stuart Mein (biography) and William Edward Murphy (Obituary) [6] whose holdings also covered the site of the Scarborough Hotel. Mein and Murphy are honoured in Scarborough street names. In 1878 none of the roads or streets had names and were referred to as “government roads." There were no subdivisions at that time, merely the numbered "portions", for agricultural purposes only. The 1880’s were the days of the land boom when it was very profitable to sell small building allotments. So land speculators bought as many of the agricultural portions as possible (termed “estates”) from the original owners. The portion for Pop’s blocks was covered by The Bayview Estate in Scarborough. Interestingly, The Bayview Estate map on this profile is dated circa 1928, five years after Pop has title. By November 1882, 5,000 estate blocks across Humpybong (as the peninsular was known) had been offered for sale as small allotments in 30 townships. Most of the allotments were sold including 182 in Bayview. That was the beginning of progress in Humpybong. Until that time, the district had not advanced since the first sale of agricultural reserves in 1862. [5] J.Borrie purchased 23 acres in 1865 which included the future blocks owned by Pop and was likely the first title holder in 1876.[7]

Pop O'Reilly and Maud were farewelled from Boonah likely 6-8 April 1945, and by Thursday 12 April 1945 had relocated to Scarborough.[8]. Pop continued as a hotel licensee in Boonah, Ipswich and Cunnamulla.

For some reason I was a wanderer from an early age, perhaps from being sent very young to do the shopping, and carry Grandma’s bets to the SP bookie, Mr. White, around the corner from Mein St., Scarborough.[9]

The Suburb of Scarborough derives its name from the English seaside resort of the same name. The suburb was first identified as an estate, then a township, and then a suburb when Redcliffe was designated as a Town. Scarborough's Viking name is first mentioned in Viking sagas as Skarthborg and Skarthabork, meaning Skarthi's stronghold.[10] 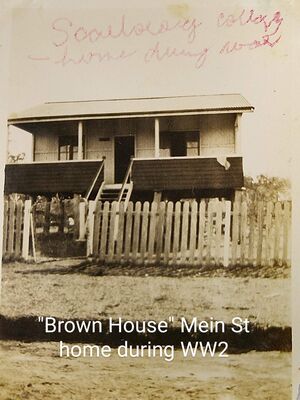 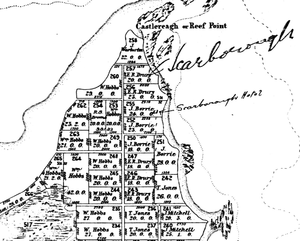 The Bayview Estate circa 1928 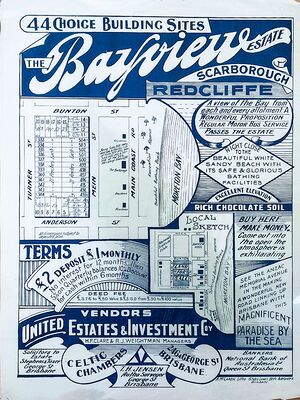 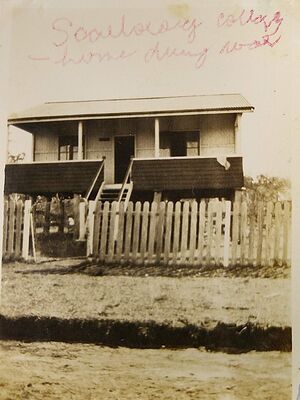