[send private message]
This page has been accessed 92 times.

Ernest Henry Allchurch signed up for military service on 13 Jan 1916, at the age of 21. He joined the 43rd Infantry Battalion AIF, as a private. On the form he completed at the time, he gave his occupation as Farmer, and address as Port Broughton. His next of kin was his mother, Mrs Lucy Jane Allchurch, also of Port Broughton. [1]

His description on the form is as follows:

On 9th June 1916 he embarked on the ship HMAT Afric A19, in Adelaide. The WW1 Nominal roll indicates that he was paid 5/- per day up to embarkation. After embarkation he had an additional deferred pay of 1/- per day to be paid on completion of service. Doesn't seem a lot of money when you're risking your life for your country.

Although his record doesn't say, the ship probably went to England, as the battalion was based on Salisbury Plain, in Wiltshire. In the Information about the battalion on RSL Virtual War Memorial, [2] it is stated that they had a stop over in Egypt.

On 18th August 1916 Ernest was promoted to Driver, and on 25th November, the battalion left for France from Southampton. At that point he went back to being a Private. From the 6th to 18th December he was sick in hospital in "Steenweek" (possibly Steenvoorde in NE France) with influenza. He was well enough to rejoin the battalion on 21st December. [1]

Apparently, the battalion moved to the Western Front in December 1916, and was engaged in trench warfare during the first part of 1917. It's first major action was at Messines on 7th June, then later it took part in the 3rd Ypres campaign. [2]

On 13th June, 1917, Ernest was wounded in action with a gunshot wound in the shoulder and was hospitalised in Camiers, which is on the Channel coast of France, a little south of Boulogne. He rejoined his unit on 10th July, but was wounded again on 31st July, with a gunshot wound to the thigh. Following this second injury, on 3rd August, he was shipped to England to hospital. [1]

He returned to his unit on 22 Nov 1917, so it looks as if he was fortunate enough to miss the Ypres battle. Before returning, he was given 2 weeks "furlo" (furlough?) in Bristol. [1]

In 1918, the Battalion fought at Villers-Bretonneux. This was the site of the first battle between tank forces, on 24 Apr 1918, during which some 1,200 Australians lost their lives. It then fought at the Battle of Hamel, a successful attack by Australian and American forces on 4 Jul 1918, followed by the Last Hundred Days campaign which commenced in August, and lasted to the end of the war in 1918. [2]

There is little information about what Ernest was doing during this latter period of the war. It seems he sprained his ankle on 1st September, so was out of action for about 4 weeks. During that time, he was disciplined for the "Crime France 11.9.18. Disobedience of D.R.D No. 12 Gambling 11.9.18 . Award 4 days F.P. No 1 by Lt. Col. F. A. McGammon". [1]

More information on the battalion is here and here 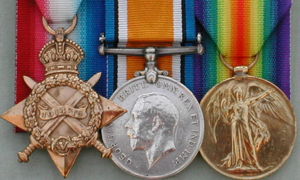