[send private message]
This page has been accessed 222 times.

The story, in brief

On 26th January 1808, twenty years to the day after the First Fleet of convicts founded Sydney as the first European settlement on Australian shores, the New South Wales (NSW) Corps detachments spread throughout the mainland penal settlements under the command of Major George Johnston, working closely with former army officer, John Macarthur, treasonously deposed the Governor of NSW, Captain William Bligh RN. Afterwards, Macarthur ruled the colony, with the senior military officer stationed in Sydney (Lieutenant Colonel Joseph Foveaux July 1808-January 1809 and Colonel William Paterson January-December 1809) acting as the lieutenant-governor of NSW until the arrival from England on 1st January 1810 of Major General Lachlan Macquarie as the new officially-appointed governor. The military coup, and the events leading up to it are known as The Rum Rebellion and remains the only successful armed takeover of government in Australian history.[1]

Whilst not a 'primary incident', per se, by the time Bligh arrived as the fourth governor of New South Wales a terrible pattern had been established in the colony, stemming almost from its beginning in 1788. The original governor had met with an obstinate New South Wales Marine Corps, that included Johnston. The marines were replaced by the New South Wales Corps in 1790, with some officers, such as Johnston, transferring across so as to remain in Sydney Town. During the period December 1792 and September 1795, the corps commander, as lieutenant-governor, was acting governor of the colony; during which time the corps' officers, especially Macarthur, developed such a monopolistic control over trade, customs, convict allocation and infrastructure that subsequent naval governors Hunter and King were unable to stem it's vested interests due to the corps' officers' monopoly of wealth and control over justice.[3]

Soon after his arrival at Sydney, in August 1806, Bligh was given an address of welcome signed by Johnston for the military, by Atkins for the civilian officers, and by Macarthur for the free settlers. However, not long after, he also received addresses from the free and freed settlers of Sydney and the Hawkesbury River region, with a total of 369 signatures, informing that Macarthur did not represent them, as they blamed him for withholding sheep so as to raise the price of mutton.[1]

One of Bligh's first actions was to use the colony's stores and herds to provide relief to farmers who had been severely affected by flooding on the Hawkesbury River, a situation that had disrupted the barter economy in the colony. Supplies were divided up according to those most in need and provisions were made for loans to be drawn from the store based on capacity to repay. This earned him the gratitude of the farmers but the enmity of traders in the Corps who had been profiting greatly from the situation.[1]

Bligh, under instructions from the Colonial Office, attempted to normalise trading conditions in the colony by prohibiting the use of spirits as payment for commodities. On 31st December 1807 he received instructions from Viscount Castlereagh, Secretary for Colonies, that he was to cease the barter of spirits. Evatt argues that the enmity of the monopolists within the colony stemmed from this and other legal policies which counteracted the power of the rich and promoted the welfare of the poor settlers, such as Bligh ceasing the practice of handing out large land grants to the powerful in the colony.[4]

Abbott, set for transfer to Sydney and appointment to the magistracy in that primary settlement, strangely returned to Parramatta on the 27th January. It became clear during the subsequent 1810 trials that this effectively ensured the full support of the detachment in that second-largest settlement of the coup that was about to take place. Contrary to his perjurous testimony, Abbott was availed of prior knowledge to the conspiracy.

Bligh had the Judge-Advocate, Atkins, issue an order for Macarthur to appear on 15th December 1807 on the matter of a bond that was subject to forfeiture over imported stills (Abbott was a co-respondent). Macarthur disobeyed the order, was arrested and bailed and failed to appear for trial at the next sitting of the Sydney Criminal Court on 25th January 1808. On the morning of 26th January 1808, Bligh again ordered that Macarthur be arrested and also ordered the return of court papers, which were now in the hands of officers of the corps. He summoned the officers to Government House to answer charges made by the judge and intended to inform Johnston that he considered the action of the officers of the corps to be treasonable.[1]

Johnston, instead, had gone to the gaol and issued an order releasing Macarthur, who then drafted a petition calling for Johnston to arrest Bligh and take charge of the colony. This seditious petition was signed by the officers of the corps and other prominent citizens but, according to Evatt, most signatures were probably added only after Bligh was safely under house arrest.[4] At 6:00pm that evening, the corps, with full band and colours, marched to Government House and delivered its coup d'etat; they arrested Bligh. Not that Bligh had any means of resisting the coup, being intensely loyal to his king, he simply did not foresee that the king's commissioned officers could stoop to such treachery. During 1808, Bligh and his daughter, the recently widowed Mary Putland, were confined to Government House, under house arrest. Bligh refused to leave for England until lawfully relieved of his duty.[1]

Following the overthrow, Johnston notified his commanding officer, Paterson, who was away establishing a settlement at Port Dalrymple (now Launceston), of all that had happened. Paterson's response was to stay where he was and provide his second-in-command, Foveaux, returning to Sydney from England, with orders to become acting lieutenant-governor. Macarthur was appointed as Colonial Secretary and effectively ran the business affairs of the colony. Johnston assumed a promotion to Lieutenant Colonel in April 1808. Foveaux left Bligh under house arrest and turned his attention to improving the colony's roads, bridges and public buildings. Paterson eventually returned to Sydney in January 1809, sent Johnston and Macarthur to England ahead of Bligh to pre-empt the inevitable trial, and confined Bligh to the barracks until he signed a contract agreeing to return to England. Paterson then retired to Old Government House, Parramatta and left Foveaux to continue 'running the colony'. Bligh was given the use of HMS Porpoise, a ten-gun store ship, on condition that he return to England. However, he sailed to Van Dieman's Land (Tasmania), seeking the support of the Lieutenant Governor there, David Collins, to re-take control of the colony. Collins failed to support him, on Paterson's orders, and Bligh remained cut off on board the Porpoise, moored at the mouth of the River Derwent south of Hobart, until January 1810.[4]

The Colonial Office finally decided that sending naval governors to rule the colony was untenable. Instead, the New South Wales Corps (re-named the 102nd Regiment of Foot) was to be recalled to England and replaced with the 73rd Regiment of Foot, whose commanding officer would take over as governor. Bligh was to be reinstated for 24 hours, then recalled to England. Major General Lachlan Macquarie was put in charge of the mission and took over as governor with a ceremony on 1st January 1810. When Bligh received the news of Macquarie's arrival, he sailed to Sydney, arriving on 17th January; departing for England on 12th May aboard the Hindostan.[1]

Macquarie reinstated all the officials who had been removed from office by Johnston and Macarthur and cancelled all land and stock grants that had been made since Bligh's deposition, though to calm things down he made grants that he thought appropriate and would prevent any 'revenge action'. With the key protagonists out of the colony and an army general as governor with his former regiment as the military force – loyal to both the king and his representative – the colony quickly 'turned about', developed infrastructure, focused on exploration and expansion, emancipated time-expired and well-behaved convicts, and became prosperous. 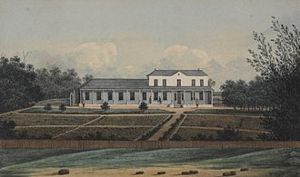