Australian Army Generals aims to honour the lives of Australia's senior soldiers, recognising them as one of the key groups of people in Australia's development. Some 160 deceased Australian Army generals have been identified and have profiles on WikiTree (some 60 more are still serving or living). Many generals are Notables. Many have gone on to carve out careers as diplomats, philanthropists, businessmen, doctors, politicians, voluntary workers and even farmers. The intention is to extend the project to include RAN Admirals and RAAF Air Marshals at a later date. For the purpose of this category, generals include all those who attained the ranks of Field Marshal, General, Lieutenant General and Major General of all eras. Although classified as generals until 1921, Brigadier Generals of the First World War have been excluded to maintain continuity with later eras.

The senior, or general, ranks in the Australian Army are (in descending order):

The General rank insignia, identical to those of the British Army excepting for the title 'Australia', comprise one or more of three symbols:

And who are Australia's Generals?

This section is being developed and will concentrate on their senior commands and service in the ranks of the generals.

The first general to serve on the Australian continent was Lachlan Macquarie CB, the fifth governor of the British Colony of New South Wales from 1810 to 1822 (which then encompassed everywhere from the tip of Cape York to the southern point of Van Dieman's Land, west for half of the continent and east to Norfolk Island). Macquarie arrived as a Lieutenant Colonel in command of his 1st Battalion, 73rd Regiment of Foot, however was promoted to Colonel upon assuming his vice-regal duties on 1st January 1810 with the battalion placed under the command of Lieutenant Colonel Maurice O'Connell (who would marry Mary Putland, the widowed daughter of former Governor of New South Wales Vice Admiral William Bligh RN). Macquarie was subsequently promoted to Brigadier General in 1811 and then to Major General in 1813. Of course, he served in the capacity of governor and not as a military commander. Macquarie retired to Britain, where he died in 1824 at St James London and was entombed at Isle of Mull, Argyllshire; with the family tomb administered by the National Trust of Australia. Macquarie was succeeded as governor by Major General Sir Thomas Brisbane from 1821-25, Lieutenant General Sir Ralph Darling KCB 1825-31, and Major General Sir Richard Bourke KCB 1831-37.

Australia's defence continued to be dependent upon British forces until 1870 and then the Colonial Military Forces of the six independent colonies (listed alphabetically) New South Wales, Queensland, South Australia, Tasmania, Victoria and Western Australia, each of which were commanded by British Army officers seconded to the respective Colony:

Even following Federation in 1901 and the establishment of the Australian Military Force in March that year, Australia remained dependent on seconded British officers until such time as we could develop our own military leaders:

Generals of the Australian Army

The next Australian to be promoted Major General was Sir William Bridges, at the commencement of the (First World) War in 1914 to command the Australian Imperial Force and, subsequently, the 1st Division. Bridges was killed at Gallipoli just weeks after the ANZAC landing. Gordon Legge was promoted and appointed as Bridges' replacement. Sir Harry Chauvel was soon after promoted and replaced Legge, who moved sideways to command the newly-formed 2nd Division. Chauvel went on to become the hero leader of the Light Horse Divisions and Corps in the Middle East. About that time, Sir Newton Moore, a politician and citizen soldier, has promoted to Major General to command AIF units in the UK (an appointment that only continued to 1917). As the AIF continued to expand in 1916, Sir John Monash and Sir Jim McCay (a former Federal Minister of Defence) were promoted to Major General to command the newly-formed 3rd and 5th Divisions respectively. The 4th Division was initially commanded by a British General. Five further appointments were made in late 1916 and 1917, namely James Mackay to establish an Army Reserve, William Holmes to command the 4th Division (however, he would be killed in action in 1917), Sir Talbot Hobbs to take over command of the 5th Division, Sir Neville Howse VC to command AIF Medical Services and Sir Brudenell White to work with British General Birdwood in the Australian Corps and British 5th Army. The final six appointments to senior command came in 1918 as the war trudged towards an Armistice: Sir Charles Rosenthal to 2nd Division (Legge moved to Chief of the General Staff), Sir William Glasgow to 4th Division (replacing the deceased Holmes), Sir Jack Gellibrand to 3rd Division (Monash had been promoted and given command of the Australian Corps), Edwin Tivey to 5th Division (Hobbs had taken over 1st Division), George Leonard Lee to Eastern Command New South Wales (the first Major General to be appointed with a view to post-war), Sir Granville Ryrie to command the Australian Mounted Division and AIF in Egypt post-Armistice, and Reginald Browne to non-conflict assignments. Legge, Monash, McCay, Hobbs, Howse, Glasgow, Gellibrand, Lee, Ryrie and Browne went onto the Retired List within five years of the end of the war, leaving only Chauvel, White, Rosenthal and Tivey serving as Generals beyond the mid-1920s. The changing needs of the post-war Army would also necessitate having leaders in staff roles, as well as command.


Of the First World War Australian Generals that continued to serve beyond 1924-25, Tivey would only serve until 1926 and Chauvel until 1930. Rosenthal was the Militia commander of 2nd Division until 1926 and again 1932-1937, whilst a politician. In the 'between wars' period, they would be joined (mostly for short periods) by fellow First World War veterans: Victor Sellheim, James Mackay, Charles Cox, Frederic Hughes, John Forsyth, Joseph Gordon, George Johnston, Godfrey Irving, John Paton, Walter Coxen, Harold 'Pompey' Elliott, Charles Brand, Thomas Dodds and George Rankin. Other than White, the majority were tasked solely with running a peacetime Army.


To some, in the military and in the federal parliament, from the early 1930s they could see another global war coming; not just in Europe and the Middle East – Nazi Germany, Fascist Italy, Communist Soviet Union (although they would later 'swap sides') – but also in the Pacific – Japan. And there were new generals who would command in a World War having gained experience in a previous World War.

Gordon Bennett DSO was promoted to Major General (having been Australia's youngest Brigadier General) in 1930 and appointed to command 2nd Division. He was often outspoken and created enemies, so when war was declared, instead of being given 6th Division as the most senior general, he was appointed to establish the Volunteer Defence Corps. He was given command of the newly-formed 8th Division in 1940 and took it to Malaya and Singapore. When Singapore fell, he left his post and returned to Australia. His final appointment was to command III Corps in Western Australia and retired in May 1944. Owen Phillips DSO was promoted to Major General in 1933, upon appointment to command the 1st Division. He then served as Inspector of Coastal and Anti-Aircraft Defences until retiring in 1942.

Doctor Rupert Downes, son of British and Colonial Major General Major Downes, was Director General of Medical Services from 1934 until killed in an aeroplane crash in March 1945). He did much to prepare Australia medically for the Second World War and to cope with it. Sir Julius Bruche was Chief of the General Staff until 1935, when he was succeeded by Sir John Lavarack DSO. Lavarack tried to convince the 'powers that be' that the government's defence policy was flawed. By so doing, although he was correct, he made enemies, resulting in his appointment to a 'backwater', Southern Command, when the war actually came in 1939. With Sir Thomas Blamey DSO (promoted Major General in 1931) appointed to command 6th Division and the Second Australian Imperial Force. Sir Carl Jess DSO was responsible from 1935 for greatly increasing the size of the Militia as war in the Pacific loomed in his position of Adjutant General and Chairman of the Department of Defence's Manpower Committee, and organised the Australian Women's Land Army during the war. John Hardie DSO served as a Major General from 1937 as Inspector General and then Inspector of Administration until retiring in 1942.

Ernest Squires DSO MC (promoted Major General in 1935) was appointed Inspector General in 1938. His investigation of the Army's preparedness for war was welcomed by the government and the Military Board in December that year and he was subsequently appointed Chief of the General Staff. He was dead in March 1940. Sir Brudenell White DSO, despite being 63 years of age, was coaxed out of retirement to again serve as Chief of the General Staff, with promotion to General; just the third Australian to attain the rank (after Chauvel and Monash). In August 1940, he was killed in a plane crash, along with three federal ministers and some senior public servants. Sir Vernon Sturdee DSO was promoted to Major General and became Australia's third CGS in five months. Not a good way to begin a global war!


As was the case following the First World War most of the General staff retired in the post-war period of about five years. Only John Whitelaw (1951), Leslie Beavis (1952), Sir Horace Robertson (1954), Sir Sydney Rowell (1954), Sir Frank Berryman (1954), Sir William Bridgeford (1954), Sir John Northcott (1956), Allan Boase (1957) and John Chapman (1963) continued to serve beyond 1950, providing continuity. It was also different from before strategically. Whereas the reaction to WWI was 'that was the war to end all wars' or 'she'll be right, Britain has our back', now we needed a different ally. And that was in the form of the USA. And the focus would be on regional conflicts and peacekeeping, especially in the face of colony after colony seeking, and in several cases fighting for, their independence from the global British Empire. A Cold War developed between the two new 'super-powers'; the USA and the USSR (the UK was virtually bankrupt, Germany and Japan crushed). De-colonisation in South East Asia. And conflicts came, and came close to Australia. There soon came the Malayan Emergency 1948-60, Korean War (1950-53), Indonesian Confrontation 1963-66 and Vietnam War, for Australia, 1962-73.

The Australian Army has, as at 2020, three Lieutenant Generals and 22 Major Generals. At a generals to servicepeople ratio of 1 : 2,200, this number is regarded as one of the most bloated 'general's clubs' in the western world.

Chiefs of the General Staff / Chiefs of Army

Australian Army Generals is a sub project of Australia Project, managed by the Military_and_War Project. Project Co-ordinator is Kenneth Evans. If you would like to participate in this project, please add your name below under current helpers, or send an advice to Ken, asking to have your name listed here. If you like, let us know beside your name whose profile/s you will work on.

Any Project Protected or Project Managed profiles are cared for by the Australia Project.

We do need people to help add to the Tree by 'having-a-go' at the following tasks:

note on sourcing proof of service

When collaborating on a profile:

If Australian Army Generals isn't for you, fellow Wikitreer, the following associated Projects could use your help. Our overall goal is to create one world-wide tree:

Useful information on other websites 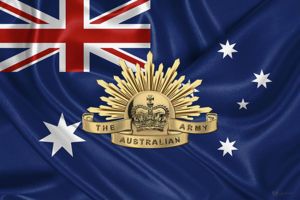 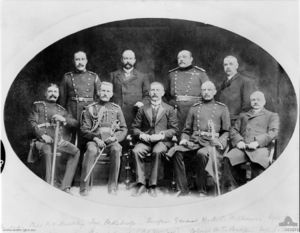