[send private message]
This page has been accessed 1,396 times.

To add a sticker to a profile, add this under the Biography: {{One Name Study|name=Avery}}. To add a profile to the AVERY Name Study, insert [[Category: Avery Name Study]] before the Biography.

To find profiles of Averys in the Avery Name Study go to: https://www.wikitree.com/wiki/Category:Avery_Name_Study

Please feel free to add the history of your particular AVERY family.

Avery is a given name which was originally an English surname that was itself derived from an Old French pronunciation of the name Alfred or the Ancient Germanic name Alberich. The meaning of the name is derived from the Old English words aelf, meaning elf, and ric, meaning ruler, power. https://en.wikipedia.org/wiki/Avery_(given_name)

The most written-about Averys in America have been the so-called Groton Averys. The Rev. David Avery wrote a very early history of this family in 1800. This was followed by Elroy and Catharine Avery’s 1912 book The Groton Avery Clan.

The Groton Averys. The forebears of this family were Christopher Avery and his son James Avery who arrived in America in 1630, first settling in Gloucester, Massachusetts and then in New London, Connecticut. James died in the nearby township of Groton in 1700. In 1871 it was worthy of note that out of the 545 representatives of the town of Groton, 104 have borne the name of Avery and all were descendants of Captain James Avery. (John D. Rockefeller's mother was Lucy Avery.)

Solomon Avery moved to Pennsylvania in 1798. A descendant was Cyrus Avery, the so-called father of Route 66. He was a realtor in Tulsa, Oklahoma in the early 1900’s who promoted the road in order to link rural communities from Chicago to Kansas and onto Los Angeles.

Another line led via Cayuga county, New York to Benjamin Avery who started a blacksmith shop at Virginia in 1825. Twenty years later he established himself in Louisville, Kentucky and began making plows. By the time of his death in 1885 his company was the largest manufacturer of plows in the world.

Then there was Dr. Dudley Avery, also for a time in Cayuga county, who settled in Baton Rouge, Louisiana in 1806. He died at sea of yellow fever in 1816. However, by that time he had given his name to Avery Island where his son Daniel was a sugar planter, judge, and state senator. During the Civil War Daniel’s son John developed a valuable salt mine on the island. The aftermath of the war found the family estate ruined. But Daniel’s son-in-law Edmund McIlhenny began making there the now famous Tabasco brand pepper sauce.

William Avery, an apothecary from Berkshire, came with his family in 1650 and made his home in Dedham, MA. His grandson John was minister at the first church at Truro on Cape Cod. Later descendants were to be found in Massachusetts and Maine primarily. There was also William Averill, first sighted in Ipswich in 1637. Many of his descendants in Maine and New York state became Avery.

History of the Avery Family of Greenland, N.H.

There is controversy about which Avery first settled in Portsmouth, NH and then Greenland, NH.

[NOTE: The book "Great Migration: Immigrants to New England", 1634-1635, Vol I, A-B has an article on the Thomas Avery of Salem who came to America in 1633 and states that he is NOT the Thomas Avery of Portsmouth, NH whose widow was named Joan. So the mix-up between the two Thomas Averys started very long ago.]

Thomas Avery was a landowner in Portsmouth (NH) in 1657 and his wife Joan verified his estate in 1681. Thomas Avery 2nd was in Portsmouth in 1688 and was married to Abigail. John Avery, presumed to be his son, was in Greenland in 1710. His wife Elizabeth (daughter of John Hill) was admitted to the church in 1712. By 1723 John Avery was in Stratham, purchased land from John Pett and wife Abigail and died in 1731.

Members of Avery One Name Study (including those with a birth name/current name other than Avery but have Averys in their family tree): Deb S. Plaag (formerly Gilbert) T.R.Counce (aka Redlin) 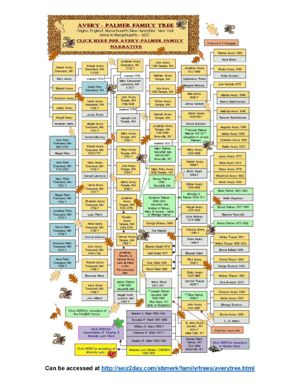 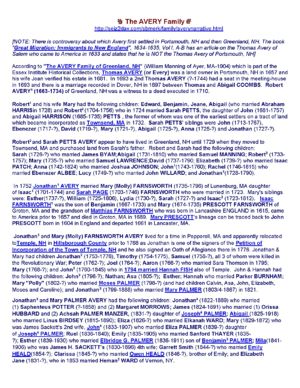