[send private message]
This page has been accessed 617 times.

This is a resource page for the Awbrey/Aubrey Name Study.

Note: This research does not include information on the Aubrey/Awbrey ancestor who came from Normandy to England.

HISTORY OF NORMANDY, THE NORMAN LANGUAGE AND NORMAN NAMES

The area of France known as Normandy extends from north of Dieppe in the northeast, southwest to Alençon, slightly northwest to Avranches and north to Cherbourg.

The name came about due to the Norse, men of the north, invasions. They came from what is current day Denmark, Norway and Sweden.

The Norse that stayed in the conquered areas eventually made treaties, and swore allegiance, to the King of France.

Anglo-Norman, or Anglo-Norman French, is a dialect of Norman is a variety of the Norman language used in England and to a lesser extent elsewhere in the British Isles during the Anglo-Norman period – 1066-1204.

(British Family Names: Their Origin and Meaning, with List of Scandinavian, Frisian, Anglo-Saxon and Norman Names by Rev. Henry Barber – published 2nd Edition 1903 link) (This is an e-book that is not free – not all pages can be viewed)

A great deal has been written about the Roll of Battell Abbey and the companions of the Conqueror, which is doubtless of great interest to those who claim to be descendants of the persons therein recorded.

There was such a roll suspended in the great hall of the building, and it bore the names of 645 knights, but it has disappeared long ago, as well as the other relics of the battle, which were removed to Cowdray, and perished in the great fire there in 1 793.

There are several copies more or less imperfect. The lists which appear to be the most authentic are : Duchesne's list, taken from the abbey charter, containing 405 names; Leland's collection, with 498 names; Magny's catalogue, with 425 names; Delisle's, with 485 names. These are all of a much later date than the Conquest, probably temp. Ed. I.

Of the great array of time-honoured names very few are now borne by direct representatives. They exist rather among the old gentry than in the peerage. In the majority of cases the later descendants of illustrious families have sunk into poverty and obscurity unconscious of their origin, and this was more likely to be the case with the younger branches, since the name or title of the family went with the elder line that inherited the estates.

The following names have been collected from the lists above mentioned. Many of them will be found in Domesday Book, and where such is the case they may be considered to be genuine followers of the Conqueror. It is obvious that those which compare favourably with Domesday Book are the most reliable, and others which do not stand that test may be looked upon as of later date. The names of some of the Flemings who accompanied William are also included in this list.

Much doubt has long existed as to the authenticity of the several versions which have appeared at different times, claiming to be a roll of the names of the Norman invaders who survived the battle of Hastings, but it is manifest that many of those recorded, even if they were ever upon the original document deposited with the monks of Battell Abbey, are not found to correspond with either the tenants-in-chief or the under tenants of Domesday Book at the time of the Survey (a.d. 1086). On the other hand, the last mentioned — of whom there is a great number — have hardly a place upon the roll.

It is well known that the heralds of the fourteenth and fifteenth centuries were not scrupulous in adding names to the list.

Queen Isabella of France, the consort of Edward II., introduced in her train many personages bearing surnames previously unknown in England. The Rotuli Normanniae, R. Hundredorum, and R. de Oblatis et Finibus, temp. Regis Johannis, Testa de Neville, Pipe Rolls, etc., are valuable evidence as to Norman names. The place-names of Normandy have been added. The asterisk denotes a tenant-in-chief.

(following the above is an index of names with the following entry – no other entries under “A” seem applicable) Aybeuare (John Aubry). Aubevoye, loc. n. (no explanation for “loc. n.”)

Aubrey. Sir Reginald Aubrey, 1088, was granted lands in Brecknock by Bernard de Newmarché. The Norman origin of this family is admitted. It may be the same as the family of Alvery, or Alfrey. Osmond de Alebrai and Samson de A. occur in Normandy, 1198 (MRS). Hence the Baronets Aubrey.

Name Variations From the Following Research:

Aubrey. Sir Reginald Aubrey, 1088, was granted lands in Brecknock by Bernard de Newmarch^. The Norman origin of this family is admitted. It may be the same as the family of Alvery, or Alfbet.

Surnames of the United Kingdom: A Concise Etymological Dictionary by Henry Harrison

(Behind the Name link)

Meaning & History: Derived from the Germanic [https://www.behindthename.com/glossary/view/name_element elements alf "elf" and ric "power". Alberich was the name of the sorcerer king of the dwarfs in Germanic mythology. He also appears in the 'Nibelungenlied' as a dwarf who guards the treasure of the Nibelungen.

Family Tree of Above Names:

Information from above link “Aubrey (English)”:

Meaning & History: (Aubrey) Norman French form of the Germanic name ALBERICH. As an English masculine name it was common in the Middle Ages, and was revived in the 19th century. Since the mid-1970s it has more frequently been given to girls, due to Bread's 1972 song 'Aubrey' along with its similarity to the established feminine name Audrey.

MEANING: This name derives from the Old High German name “Alberich”, composed of two elements: “*albiz” (elf, sprite, fairy, supernatural being) plus “*rīkijaz” (kingly, royal, noble, mighty, distinguished, powerful, rich). In turn the name means “powerful elf, king of the elves”. Oberon is a king of the fairies in medieval and Renaissance literature. He is best known as a character in William Shakespeare's play, A Midsummer Night's Dream, in which he is Consort to Titania, Queen of the Fairies. Alberich was the king of the dwarves in Norse mythology, and is also present in the Nibelungenlied. Saint Albéric of Cîteaux († 1108), was a Christian saint and abbot, one of the founders of the Cistercian Order. In the Middle High German Nibelungenlied, Alberich is a dwarf, who guards the treasure of the Nibelungen, but is overcome by Siegfried. News of the gold robbery and ring of power incited gods and giants alike to action.

Surnames of the United Kingdom: A Concise Etymological Dictionary by Henry Harrison 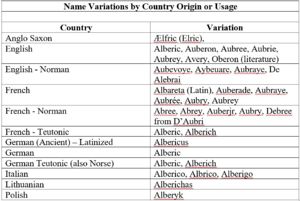 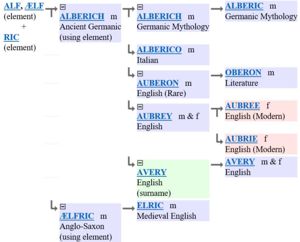 Name Use In Other Languages

Aubrey Surname in the United Kingdom 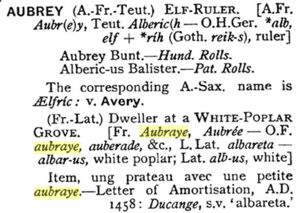