[send private message]
This page has been accessed 1,006 times.

The Baker-Fancher party was the name used collectively to describe emigrants to California leaving from the Ozarks in the spring of 1857, primarily from the northwest Arkansas counties of Benton, Carroll, Johnson, and Marion. The group was to be led by Alexander Fancher, an experienced man previously making the same journey with his brother John Fancher, who remained in California to establish his home. The other organizer was John Twitty Baker, a well respected gentlemen in the region.[1]

The trip was well publicized, and many smaller parties joined the Baker-Fancher party as it departed Arkansas for the way-point of Salt Lake City, Utah Territory. The collective party was well outfitted with wagons, traveling carriages, a large herd of cattle estimated at close to 1,000 head, oxen, as well as numerous horses. When the groups left Arkansas in April 1857, the estimated total company numbered more than 200 men, women and children.

Many of the families in the group were prosperous with ample financial resources to make the journey west. Besides John Twitty Baker from Carroll County, and Alexander Fancher from Benton County, other groups included the Huff train, which also left from Benton, the Mitchell, Dunlapp, and Prewitt trains which left from Marion County, and the Poteet–Tackitt–Jones, Cameron, and Miller trains which left from Johnson County. A Methodist minister from the Poteet–Tackitt–Jones train, Pleasant Tackitt, led the others in worship and prayer services while on their journey.[citation needed]

Other groups and individuals both joined and left the train as it made the westward journey. These parties traveled for various reasons; some to settle permanently in California where friends or family awaited their arrival, some joined to drive cattle west for profit, and some to find California gold. Like all emigrant groups traveling to California, they brought money with them and planned to replenish their supplies in Salt Lake City before making the final leg of the trip.

The initial journey from northwest Arkansas to the Utah Territory was either uneventful or the events that followed overshadowed any previous troubles, as little is known of the bulk of the period from April to July, 1857. The Arkansans arrived in Utah about August 4th that summer with over 800 head of cattle and were badly in need of resupply when they reached the planned stop in the Salt Lake area. They rested some, but quickly moved south along the Old Spanish Trail to Mountain Meadows to graze their livestock and prepare for crossing the desert that fall. However, while they rested, the party was attacked and slaughtered over a five day period in mid-September. At the end, only a few infants and toddlers were left alive and none originating with the train made it to California as planned.

For additional details about this event, please explore these Suggested Resources.

The following wagon trains and family groups made up the core Baker-Fancher Party:[citation needed]

Those joining/leaving before reaching Utah Territory

Those leaving in Utah Territory

The Mountain Meadows Massacre was a series of attacks on the Baker-Fancher emigrant wagon train while camped at the meadow. Nearby militia leaders, primarily Mormon settlers and a few Paiute natives, made plans to attack the wagon train. The siege began on September 7, 1857 and culminated on September 11, 1857, resulting in the mass slaughter of most in the emigrant party. Those spared by the assailants were children deemed too young to tell anyone of the events.[4]

The following year the U.S. Government repatriated seventeen of the young ones to their families in northwest Arkansas, finally delivering them home in September 1859.[4] (Johnson 57 - 63)

Linking to this Page 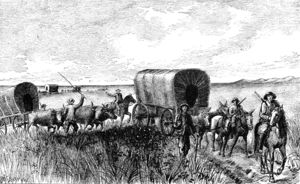