[send private message]
This page has been accessed 1,668 times.

This page is part of the Antrim Cemeteries Team.

Parking: On the Browns Bay Road aproaching this location there is a carpark on the left which at the time of writing belongs to a Horse Riding School. At the bottom of this carpark there is a gate. On going through this gate, turn left, and a short distance down this lane, on the left, there will be a short lane leading up to the entrance to the Cemetery.

Antrim: Islandmagee - Gravestone Inscriptions, 1763-1956 Ballypriormore Graveyard O.S. 41 Grid Ref. D 452008 This graveyard in the townland of Ballypriormore and parish of Islandmagee. It is readily visible being situated on a low hill about 200 yards west of the road to Brown's Bay, a mile and a half south-east of the latter. According to local tradition, the site was originally a Danish burial place and the Danes brought over a shipload of their native soil to hallow it (Donaldson - History of Islandmagee). An early Christian altar vessel was found in the ruins about the middle of the last century with the inscription "Or Do M(ac)etain Av Brolchain" - "A prayer for MacEtain O'Brolchain" (O'Laverty, 3, 141). The church was the principal church in Islandmagee at the Taxation of Pope Nicholas ( 1306 ), the peninsula then being known as Ransevyn. The foundations were removed finally about 1830. Presumably the church fell into disuse after the Reformation and a new edifice was built at Ballyharry in 1595. There also were churches in medieval times at Ballykeel, where the walls and graveyard survive, and at Port Muck, Kilcoan, Ballydun and Templeneffin of which even the sites are scarcely traceable (O'Laverty). The graveyard is well kept, with ancient and modern stones scattered throughout. The oldest stone dates from 1657 and many of the eighteenth century ones have well-carved coats of arms. Some of these early stones are copied in M.D., 8, 221-225, with illustrations of 2 of the coats of arms, but as usual the coverage is incomplete. All stones dating from 1900 or earlier which could be read have been transcribed below and arms described. The Ordnance Survey Memoir of Islandmagee carried out in 1840 recorded 17 of the names included below, together with another 17 names, the stones of which have now disappeared. Those stones no longer visible were to the following families:- Adair, Adams, Boyle, Campbell, Cathcart, Clark, Cunningham, Donaldson, Ferguson, Graham, Hamilton, McClelland, McMeekan, McMurtry, Read, Sinclair and Stafford. However, there are also in the graveyard now at least 13 stones of pre- 1840 date, with names not recorded by the surveyors. One must assume that the graveyard was much wilder that it is at present. 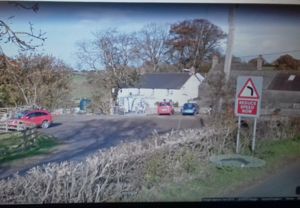