[send private message]
This page has been accessed 2,242 times.

This page is part of the Germany Project

The Baltic-Germans (Deutsch-Balten) are a German-speaking minority from the historic regions of Estland, Livland, and Kurland (collectively known in German as the Ostseeprovinzen), now part of modern-day Estonia, Latvia, and Lithuania. German-speakers were settled in the region from the twelfth century and amounted to almost 200,000 individuals at the population's peak in the late nineteenth century, but were overwhelmingly displaced during the upheavals of the twentieth century and now consist of a world-wide diaspora as well as a few thousand still residing in their historic homeland.

We are remarkably fortunate that many of the key resources for tracing Baltic-German ancestry are digitised and freely available. These are listed below. If you want to read more about how to begin tracing a Baltic-German pedigree, you might find this series of blog posts helpful.

Genealogisches Handbuch der baltischen Ritterschaften
This is the standard printed work on the matriculated nobility of the Baltic provinces and has been digitised as follows (note that only the Estland and Oesel volumes were completed - the Livland and Kurland volumes contain only a moiety of the total number of noble families in those provinces).

Memories: 2
Enter a personal reminiscence or story.
L. Jerry Hansen
My grandmother, Adeline Wilhelmina Kawell, immigrated to St. Louis in 1881 at the age of 11 mos. The ship manifest indicated she came from Peterhof. Would that put her in this group?
posted 14 Oct 2020 by L. Jerry Hansen   [thank L. Jerry]
Kylie Haese
I have added a team members section for you (or them) to add your team members names in a list. It's nice to see who the members are. Feel free to move it where you want it etc :) looking absolutely amazing by the way. Amazing job Kelsey.
posted 11 Jul 2019 by Kylie Haese   [thank Kylie]
Login to add a memory.
Images: 1
Baltic-German Arms and Flag 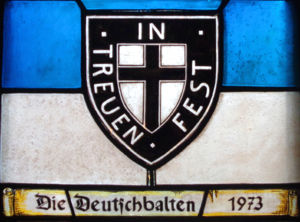 Please add Germany Project as co-manager of this profile (just click add as manager inder the privacy tab) ... the project is already on the trusted list.

Kelsey Jackson Williams
Done! Let me know if there's anything else I can do to help.

This page looks very nice, but I'm not sure if I can contribute anything to the group. My mother's ancestors lived in Lithuania Minor (East Prussia) and her DNA matches so far are all Lithuanian, Polish & Russian names, etc. Oh well, if I run across any information that I think would be helpful I will post it here. Good Luck, dusty

Just checking in to see how your work is getting on here? I would love to know how it is all going?

Also just because I am curious, is there many resources available for the Baltic-Germans?

Kelsey Jackson Williams
Thanks, Kylie! We're progressing slowly but surely and have just added another member of the diaspora to our research team, Greville Seddon.

In terms of resources, we're incredibly lucky. Kirchenbücher - what you might call 'parish registers' in English - survive in good numbers for the vast majority of parishes across the three Baltic provinces and together with the Russian revision lists (sort of, but not exactly, like censuses) it's usually possible to trace non-noble families back to the 17th or 18th centuries and noble families much earlier.

Are any of those registers available online? If so, let's add links to them above, under the heading "Links" or add a new heading "Resources". We'd like to see some resources added to this page so others can access them. Thanks for your help! Traci

Thanks for this - adding links to resource is an excellent idea and I've just done so now. See what you think!

Traci Thiessen
BEAUTIFUL!! That info will be useful to MANY people. Thanks so much Kelsey!
posted Mar 30, 2021 by Traci Thiessen