[send private message]
This page has been accessed 1,879 times.

The only chemical weapons incident of WWII

By late autumn 1943 the Italian port of Bari had become extremely important to the Allied war effort in Italy. War material from the port supported the efforts of the British 8th Army in their drive up the eastern portion of Italy. In the beginning of November the newly created US 15th Air Force was headquartered in Bari and the their war material for the bases at Foggia flowed into the port

On December 2nd 1943 there were 40 ships packed into the harbor filled with various war supplies, ammunition and aviation fuel. Docked at pier 29 waiting to be unloaded was the John Harvey, a US Liberty ship that held a secret cargo. In her hold were 100 tons of bombs filled with mustard gas, which were to be used in retaliation if the Germans used chemical weapons. The cargo of the John Harvey was a closely guarded secret, known to Roosevelt, Churchill and a few others in the high command.

Early in the afternoon of the 2nd a German recon plane made 2 passes over the port and was completely ignored. The British, who controlled the harbor considered the German air force in Italy done and did not consider an attack likely.

At 7:30 pm the harbor was brightly lit and unloading of the ships was fully underway, a blackout was considered unnecessary. Then the bombs from 105 Ju-88’s began falling, first on the old town part of the city and then on the port facilities. Ammunition ships took direct hits and began to explode and burn, also hit was fuel pipeline that began to pump burning fuel into the harbor which began to engulf and burn the ships in the harbor.

One of those ships was the John Harvey which blew up, instantly killing everyone on board. The mustard gas was released into the air and the water. 20 minutes later the air raid was over 30 ships were sunk and destroyed. The port facilities were so damaged that it took 2 months to reopen them. The raid was to be known as “Little Pearl harbor”. More than 2,000 casualties are believed to have occurred between military personal, merchant marine and civilians. The civilian death count is unknown.

“Amidst the carnage, a strange vapor with a garlic smell slowly wafted over the harbor.  Carried by the wind, it slowly crept into Bari itself as those exposed began to cough, their skin burning — some were blinded.  By dawn, 628 men, women and children — and medical staff — were in serious condition at the hospital.  Hundreds of Italian civilians fled to the country sickened — many would die, their passing left unrecorded in history.  Within the next few weeks, 83 of those at the hospital had died.” [1]

The British lost four ships, the Italians three, the Norwegians three and the Polish, two. There were more than 1,000 military and merchant marine casualties with 800 admitted to local hospitals. A conservative estimate places civilian casualties at around 1,000.[2]

“Although the gas was mentioned in official American records, Churchill insisted British medical records be purged and mustard gas deaths listed as the result of ‘burns due to enemy action.’ Churchill’s attempts at secrecy may have caused more deaths, because had the word gone out, more victims, especially Italian civilians, might have sought proper treatment. Axis Sally, the infamous propaganda broadcaster, learned the truth and taunted the Allies. ‘I see you boys are getting gassed by your own poison gas,’ she sneered.” [3]

Direct quotes from sources paint a better picture of the devastation 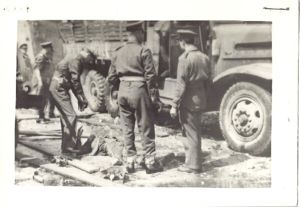 Mary Gossage
Thank you for the Bari air raid page. Only just learned about the goings on at Bari, today, at Rallypoint, then this Wikitree link was in a google search I did of Bari.

My Dad was at Bari. Don't know when . . . if it was during that time. Dad did not like to talk about the war. But he was with the North Africa contingent that moved north to Italy in September, and according to an Army buddy of Dad's, over 50 years later, they were there at Bari, the Signal Corps Radar vans setup in a carrot field, when there was some heavy duty combat going on - seems to have been the worst they experienced during the war. I have tried to get my father's records but am told they do not exist. I've also looked up Bari, but did not ever find information that is now available. Wondering if it was all classified, and some of it has been declassified in recent years. I know that Radar was a top-secret MOS at that time, which may be why I get the run-around asking for Dad's records.

Terry Wright
Thank you Jim and thank you for sharing the photos with us
posted May 07, 2016 by Terry Wright

Jim Tareco
I tagged him in the photo. No idea who anyone else is. His unit arrived there the day before on Dec 1.
posted May 07, 2016 by Jim Tareco