[send private message]
This page has been accessed 3,405 times.

Origins of the Barry Name 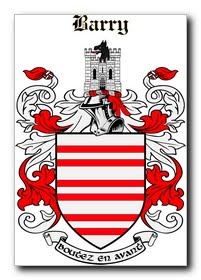 Dorothy Barry
Hi Deirdre: Using our search engine on the top left hand corner of every WikiTree page you can search for all profiles that have "Joanna Barry" within the name or names close to it.

There were too many for me to narrow down (about 54 variations of names) but none with the birth date of 1895. But several from Ireland born in the 1800's. I did send you a private email with the results I found but it would be best to use the search engine so that you could click directly on each profile as you review it.

You could also ask a question on our G2G forum for more assistance at: https://www.wikitree.com/g2g/

Before you get to much further you may want to consider going back and adding sources to any of your newly created profiles if you haven't done so.

That way others can connect to your Barry profiles and it will make this study more successful!!

Dorothy Barry
It has been suggested that if you want to see all the Barry's on this study in one place by using WikiTree +, go here: Names in one place
posted Feb 27, 2017 by Dorothy Barry
Carol Delaney
Searching for my Grandmother's lineage ; Madge (Barry) Smith from Tasmania, deceased approximately 1940 (?) 1 daughter; Peggy Alice Smith (dec), my (Carol Delaney) mother.

Alison Andrus
This information is very interesting! Thank you for creating the Barry Name Study.
posted Mar 28, 2015 by Alison Andrus