[send private message]
This page has been accessed 744 times.

A list of the early Quakers in the Beckingham area of Lincolnshire and Barnby in the Willows in Nottinghamshire either side of the River Witham during the first decade of the group: 1654-1664.

In the summer of 1654, George Fox, freshly released from Carlisle gaol, makes a tour through Yorkshire and Lincolnshire[1] on his way back to his home in Leicestershire. Perhaps one of his famous open air meetings was by the River Witham between Barnby in the Willows, Nottinghamshire and Beckingham, Lincolnshire for numerous inhabitants of the two small villages join the Quaker sect. The villages are only a mile apart across the river. The size of the congregation is impressive considering the villages would probably not had more than a few hundred souls between them.

George Parker, son of Robert and Phillippa (died within weeks)

Robert Parker, son of Robert and Phillippa (died within weeks)

Jane Roberts, daughter of John and Elizabeth (died within the year)

The Quakers were sure of the rightness of their cause. They made careful lists of all the injustices they received for following the true path. These are later published in lists by counties[2]. The list for Lincolnshire starts in Beckingham, confirming it as ground zero for the faith exploding through the county. In the lists of sufferers, the Beckingham group remains prominent up until the Act of Toleration in 1689.

1655: Elizabeth Hooton imprisoned again, this time for twelve weeks for the same offence.

John Pidd refused to pay tithes and was imprisoned for ten weeks.

1658: Arnold Trueblood refused to pay tithes and was imprisoned in Lincoln Castle gaol; he died there on 15 March.

John Pidd refused to pay tithes and was imprisoned for six months.

Richard Pidd refused to pay tithes and was imprisoned for several weeks until discharged by Order of a Committee of Parliament. 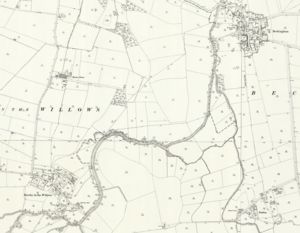 River Witham at Barnby in the Willows 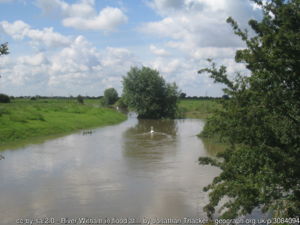