[send private message]
This page has been accessed 873 times.

The proposed constitutional amendment to form Ben Hill County specified Fitzgerald as the county seat. Following this, settlement in Fitzgerald as a colony. This colony was intended to be a colony where former Union soldiers could retire in a warmer climate than the north.. It was named for P. H. Fitzgerald, a Indianapolis newspaper editor. P.H. Fitzgerald was behind the movement to resettle Union retirees in the warmer Southern climate. Fitzgerald had some settlers by Dec. 2, 1896 and the colony was incorporated as a city. [1][2]

Ben Hill County was named for Benjamin Hill. This man covered all bases. He was born in Jasper county, Sept 14, 1823, graduated from U of Georgia, 1843, practiced law in LaGrange, supported the Union and the compromise of 1850.. The Compromise of 1850 settled Boundary issues of Texas, Mexico, New Mexico and was also a version of the fugitive Slave act.[3]

Ben Hill county is located in the “Breadbasket of the Confederacy,” 9 miles from the site where Jefferson Davis was captured by Union Calvary and “Forget Hell” bumper stickers can still be seen, combatants of the Civil War did so in their own lifetime. Philander H. Fitzgerald of Indianapolis, Indiana, served in the Union Army as a drummer boy. P.H. Fitzgerald lived in Indianapolis, but was able to make his dream a reality in Georgia.. The idea of the colony caught the interest of veterans as well as the governor of Georgia (a Confederate veteran) [5][6]

post 1880 - Fitzgerald was appointed by the governor of Indiana to serve as a pension attorney to represent Union veterans. Fitzgerald bought the Veteran’s Review newspaper, which he renamed American Tribune, raising its weekly circulation to more than 25,000 copies.[6]

1890s- Drought and depression hit many parts of the country. Especially hard hit were the Midwest farms were destroyed by the depression and drought, which many farms had belonged to former Union soldiers..Other states contributed help and food.. Georgia has a county formed by Fitzgerald and his Tribune investors. They promoted a colony for Union veterans and their families in the South where they could live warmly in a more mild climate. [6]

1890 Fitzgerald's "The American Tribune Soldiers Colony Company sold 50,000 shares for $10/share. The shares were supposed to be buying lots in town of 5, 10, 20, or 40 acre "farmettes". When he presented his plan to the Southern Governors, Governor William J Northern supported the idea. Thus Georgia was selected for the colony.[6]

1895 Fitzgerald, Georgia is the county seat which was begun by Philander H Fitzgerald a newspaperman from Indiana. Soon the settlers opened the first public school of the county which had free textbooks.. This Georgia county was formed out of Irwin and Wilcox counties to be hamed for Benjamin Hill, a former Troup County representative and senator during the 1850's. Ben Hill County courthouse was built in the first decade of the twentieth century and renovated during the 1950s and still stands.[7]

1895 Veterans invested as they needed the Southern warmth away from the North's bitter winters and the drought stricken farms. By July the Colony Company bought 50,000 acres from the Drew brothers, and 50,000 more acres were eventually bought for the colony.

The beginning company came to the site to survey and begin clearing the land with 462 men and 72 teams of horses. The local historian, Beth Davis noted that not all of the bitter wounds from the Civil War had healed.. Fitzgerald wanted a 4-square city to be located in the center of the tract.. They had to move the town's center several times as some Southerners refused to sell land to "those Yankees".[6]

Fitzgerald is the city that grew from that community/colony. The City was a 1,000 acre square having 4 wards divided into 4 blocks. Each contained 16 squares with 256 lots. (4 lots were for schools, 12 for parks, 36 for businesses, and the remaining - residential. Each lot faceda street with an alley. [6]

The veterans and families arrived while the surveyors were working. Fall of 1895 there were 2,500 people in their new home right in the center of a pine forest. Many lived in tents or covered wagons, or camped in the woods in crude huts.

It was called “Shacktown” due to the temporary shacks. "Shakedown" lined both sides of the wagon road, according to a South Georgia newspaper, resembling the midway of a carnival. Each 45h or 5th house was an eating house. People lived in all sorts of shacks, huts, tents. A teacher built a hotel which eased the housing shortage, called "The Colony House", (2 story with wooden shutters in place of windows). Here up to 36 men shared a room!!! [6]

This colony had a lack of supplies. So building of the town stopped to build a railroad line to bring supplies to the colony. Then they scheduled excursion trains, still advertising for people to come see the Yankees. [6]

Fitzgerald colony grew in times when other areas were low in cash due to the depression. This was the Northern investments from $50,000/month pensions of Union veterans. To celebrate they built the Corn and Cotton Palace for an exposition. Invitations were issued to nearby towns, with a scheduled parade of veterans. Confederate veterans paraded in their gray uniforms, then the Union vets would parade in blue uniforms. Some had apprehension due to strong post war sentiments. [6]

During the Parade of Unity, the bands played the national anthem. Following the bands were the veterans, with those wearing blue or grey marching as one behind the Stars and Stripes..The Marching veterans formed the Battalion ONE of the Blue and Gray. The message to all said old wounds were healed, old barriers were broken.. Men who had met on battle fields, met again on the street of everyday living together.[6]

1906- Ben Hill County was created from Irwin and Wilcox counties, and named for Benjamin Harvey Hill, a U.S. Senator from Georgia, a Whig leader, and a staunch opponent of Reconstruction. [8]

Ben Hill County has one city, Fitzgerald, Georgia. The community was founded by Mr. Fitzgerald for Union soldiers, who were retired, drawing a healthy pension, and desperately wanted to move away from the cold states of the North and live on a 50,000 acre tract in the South. The non-Profit American Tribune Soldiers Colony Company bought the initial land, had it surveyed and Fitzgerald was built well -organized. Fitzgerald, Georgia citizens named the streets of the town for the leaders of both Union and the Confederate armies. [6]

Ben Hill County's historic district is located in Fitzgerald, Georgia, on South Lee and S Mainstreams. Its old railroad depot is the home for the Blue and Gray Museum. Interesting areas are the Fitzgerald Fire Department Museum and the Jefferson Davis Memorial Historic site.[6]

Question, Why was Ben Hill County created by constitutional amendment instead of an act of the General Assembly?

1904 Georgia voters approved a constitutional amendment which had limited the counties formed in Georgia to 145 in number..[3][9]

1924 Georgia had 161 counties -- (16 had been created by constitutional amendment. [3]
Jan. 1st, 1932 Milton and Campbell counties merged with Fulton, leaving 159 counties.[3]
1945 Georgia voters ratified another new constitution -- This constitution gives an absolute upper limit of 159 counties, unless other counties are consolidated. [3]

Interesting tidbits- Ben Hill is one of 25 counties that has retained the original boundaries delineated by the legislature when the county was created..[3]

Gilman Paper Company harvests timber in Ben Hill County. This timber should be on its second growth by now.. Other crops of the county areTimbe cotton, peanuts, poultry, and tobacco, is one of the county's major agricultural products. Ben Hill county has its largest employers in its manufacturing region such as Shaw Industries.[7]

1st and only Courthouse, 1909 - The county's first courthouse was built in 1909. Originally, it had a domed clock tower rising from the center of the building. In 1950's the courthouse was renovated, and they removed the clock tower.. 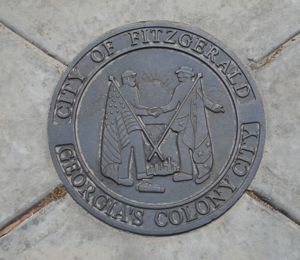 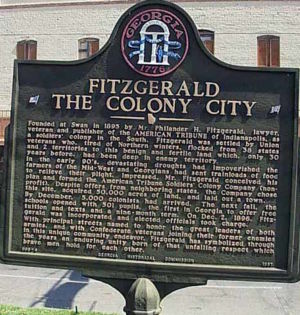 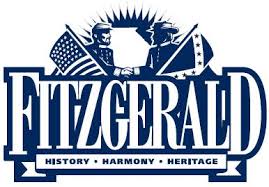 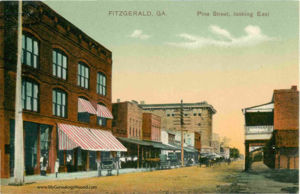