[send private message]
This page has been accessed 1,225 times.

This profile is part of the Berwick, Pennsylvania One Place Study.

This is a One Place Study to collect together in one place everything about Berwick, Pennsylvania. The hope is that other researchers like you will join the study to help make it a valuable reference point for people studying people that lived there and their contributions in history.

Population through the years

* It appears that the history of most of lower Luzerne County has a strong connection to the founding of Berwick. Evan Owen,a Scottish born Quaker had made a couple of trips and had bought land in the present day area of Bloomsburg before being called into service in the Revolutionary War. After the war he sold the land downriver and bought land further North,near where the Nescopeck Creek enters the Susquehanna. It's stated in earlier histories of the area that he bought as much as 3000 acres,some of that being in Nescopeck Twp on the south side of the Susquehanna at a price of 29 cents per acre and began laying out the town of Berwick,surveying the surrounding area and selling land to people looking for a new home.

* the project was given the go ahead and after completing the survey Owen was put in charge of building the road. It appears that,as work was completed,the area was settled fairly quickly,the valley that is now Butler,Sugarloaf and Black Creek started seeing settlers around or just before 1800 and the valley on the north side of the Nescopeck Mountain shortly after.

* Settlers had been moving into the area of Nescopeck Township along the Nescopeck Creek,closer to the river and near the present day location of the village of Nescopeck not long after 1786,more detail on that can be found here,those settlers appear to have came by the Reading route,possibly either to Northumberland and then following the Susquehanna north or some came by an overland route to Catawissa and then north by river. John and Robert Brown] and their families were the first to settle in the town of Berwick,it looks like they also came about 1786,by the end of 1786 there were 7 families living in Berwick. 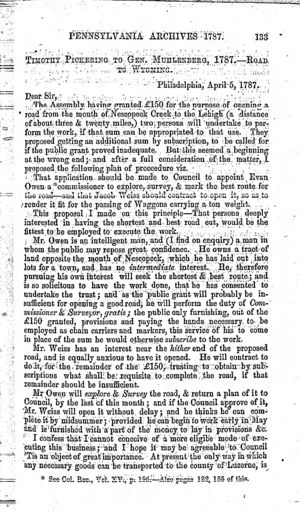 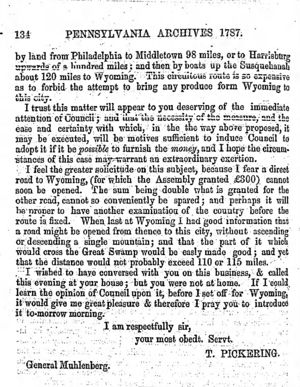 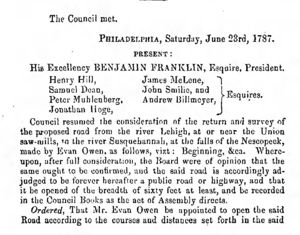 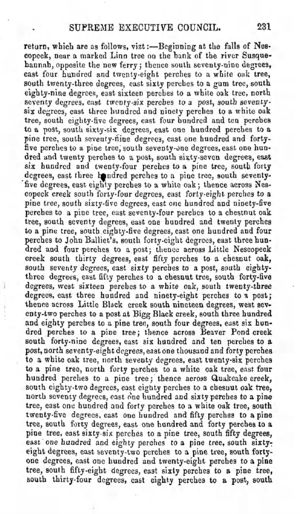 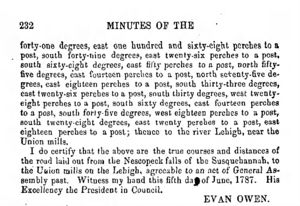