[send private message]
This page has been accessed 1,192 times.

Blanco County was created and organized in 1858 from portions of: Burnet, Comal, Gillespie and Hays counties with Johnson City as the county seat. It was named for the Blanco (white) River.

1150 AD Indigenous peoples were thefirst inhabitants, possible ancestors of the Lipan Apache.
1721- José de Azlor y Virto de Vera names the Blanco River.
1826 Benjamin Milam (empresario) is given a contract to settle 300 families between the Colorado and Guadalupe rivers.
1835- Lindsay, Callahan and Chandler purchase league previously granted to Horace Eggleston by government of Coahuila y Tejas and establish the town of Pittsburgh, Texas which is named for General Pitts, across the river from the site of future Blanco.
1836 Comanches claimed land in Blanco County.
1847 - Meusebach–Comanche Treaty for the German settlers, known as "Verein zum Schutze deutscher Einwanderer in Texas" or Mainzer Adelsverein.
1850's - Samuel Ealy Johnson, Sr., grandfather of President Lyndon B. Johnson, and his brother Jesse Thomas Johnson, set up a cattle business in Johnson City. The town is named after their nephew James Polk Johnson. The Johnson family emigrated from Alabama.
1854-1855 - Captain James Hughes Callahan and Eli Clemens Hinds become Blanco's first white settlers. Joseph Bird establishes Birdtown, now known as Round Mountain. General John D. Pitts, Judge William S. Jones, Andrew M. Lindsay, James Hughes Callahan and F.W. Chandler charter the Pittsburgh Land Company. They bought the Coahuila y Tejas grant of league to Horace Eggleston in 1835 and lay out the town of Pittsburgh, Texas. This was named for General Pitts, across the river from the site of future Blanco.

1858, February 12 - Blanco County was formed from parts of Comal, Hays, Burnet and Gillespie, and is named for the Blanco River. County seat is also named Blanco.
1860 Population of county is 1218, includes 98 slaves. Settlers are mostly Anglo-Saxon Protestants hailing from Tennessee and Alabama. Agriculture and livestock are central to the economy. Heavy population of German immigrants.
1861 County votes against secession from the Union."' Immigrants from Northern states and from Europe helped to sway opinion toward the Unionist position.[1]
1862 Legislature establishes Kendall county from part of Blanco (southwestern border). :1862 - Legislature in turn incorporates parts of Hays and Burnet into Blanco.
1865-1870-- there were only 44 Blacks in the county. Most settled in Peyton, a freedmen's colony near Blanco, Tx.
1883 Blanco High School is chartered.
1885 -Replacement of courthouse by limestone structure now known as “The Old Courthouse”.

1938- LBJ becomes a fierce advocate for rural electrification. First light bulb turned on in rural Blanco County.
1960s Lyndon B. Johnson becomes Vice President of the United States and subsequently President of the United States. Tourism becomes an important industry.
1970 Pedernales Falls State Park opens to the public.
After 1970- The number of farms in Blanco county began to rise again.

Blanco county has had two county seats. The State of Texas formed Blanco County out of portions of Burnet, Cormal, Gillespie and Hays counties. and set up the city of Blanco, Texas to be county seat in 1858 through 1890. [2]

When Blanco county was formed and Blanco, Texas served as the county seat, this is the first courthouse. The sturdy stone structure resisted all weathering. Then Preservationists,stepped in, raised money and restored it beautifully. [2]

1884 Courthouse- This courthouse was being checked for termites in the basement by an exterminator, who found no termites, but a bottle, wooden blocks, a shoe, and bones. The state and police were called. No results yet on who this could have been. But it adds a hint of mystery to this courthouse.Preservation-minded locals got together and formed the Blanco County Courthouse Preservation Society. This building has since been beautifully restored and is now one of the best.[2]

The courthouse only served as a county courthouse from 1886-1890. When the county seat moved to Johnson City in 1890, tenants used the structure for offices. In 1986, a private citizen purchased the building, began renovation of the building’s exterior. In 1998, Governor George W. Bush presided over the courthouse’s reopening. The Old Blanco County courthouse was also used for scenes in the 2010 remake of True Grit.

1916 - The current courthouse as built 1916 - Designed by San Antonio architect Henry T. Phelps, the 1916 Blanco County Courthouse was the first permanent courthouse built after the seat of government moved from Blanco to Johnson City in 1890. J Waterston was contractor for the project, a stonemason James Waterston, who had come from Scotland to Texas in 1883 to aid in the construction of the state Capitol. This is Classical Revival limestone structure and features Doric columns and a domed cupola. Recorded Texas Historic Landmark - 1983[2][3]

Of note: from The handbook of Texas: The 1990 United States census revealed that 1,175,888 Texans claimed pure and 1,775,838 claim partial German ancestry. This equals to 2,951,726 Texans with German ancestry (17½% of the state's total population). This gives a result that Germans rank behind Hispanics, and are the 3rd largest national origin group. [4] Most of the emigrant German's tended to settle in a broad, yet fragmented belt.

This is evident in Galveston, Houston, Kerrville, Boerne, Fredericksburg, Mason county, Hondo, Lindsay in Cooke County, Waka in Ochiltree County, Hurnville in Clay County, Russian German Baptist; and Lockett in Wilbarger County into the very heavily settled Hill County north and near San Antonio, Austin, Texas. [4]A majority settled in a broad, fragmented belt across the south central part of the state. This belt stretched from Galveston and Houston on the east to Kerrville, Mason, and Hondo in the west; from the fertile, humid Coastal Plain to the semiarid Hill Country and even Muenster, in North Texas. [4]

Blanco county is in the Hill country, located on the Edwards Plateau in the U.S. state of Texas, in south central Texas, bordered on the west by Gillespie County, on the north by Burnet and Llano counties, on the east by Hays County, and on the south by Kendall and Comal counties. Johnson City, the county seat, is 4 miles N of the center of the county, 40 miles west of Austin and 60 miles northwest of San Antonio.

The county's center lies at 30° 23' north latitude and 98° 24' west longitude. Blanco County is size, 714 square miles of the eastern edge of the Edwards Plateau and 800 to 1,850 feet above sea level. As all counties in the Hill country, the terrain is hilly to mountainous. Edwards Plateau with the limestone porous characteristics, cause the stream beds tohave a "stairstep" appearance due to limestone benches and steep slopes.

Hill country has live oak and Ashe juniper, with mesquite and grasses. The soils is generally dark, calcareous, stony, clay loams with many rock outcrops. Mineral resources include limestone, lead, oil, gas, industrial sand, and dolomite. Thus the tap water in this area is high in minerals, "hard water". Most of the county is best suited for rangeland and wildlife habitat. There are many deer in the area.

Northern and central part or Blanco (2/3 of the total area, drains into the Colorado River in Travis County through Miller and Cypress creeks and the Pedernales River. The southern 1/3 drains into the Guadalupe River through the Blanco and Little Blanco River.

Temperatures range from 96° F in July to an average low of 34° in January.

Rainfall averages 34.39 inches per year, and the growing season has average of 234 days.

Crops here were cotton, corn, wheat, sheep. Angora goats, and cattle. During the 1920-s and 1930's (Great Depression) farm and ranch values plummeted and crop production fell. The number of farms in the county continued to drop; by 1940 only 632 farms remained in Blanco County. Yet the ranchers endeavored to retain the cattle, sheep, and goats. Current day, the farms raise fruit trees and Pecans. 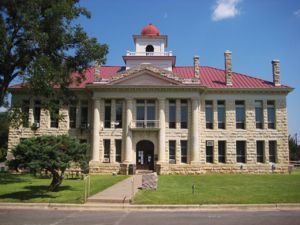 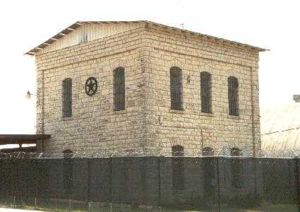 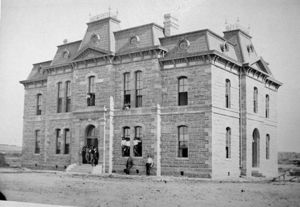 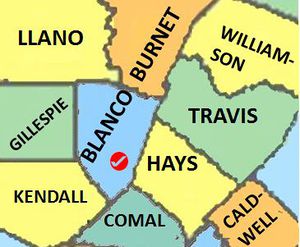 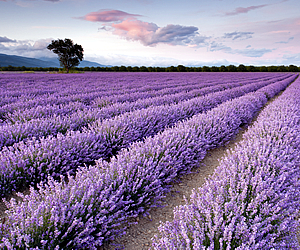