[send private message]
Last profile change on 26 Jan 2022
16:25: Traci Thiessen edited the Text on Brandenburg Team. [Thank Traci for this]
This page has been accessed 330 times.

Welcome to the Brandenburg Team Page

This Team was created to offer a place to collaborate on Brandenburg research. You can ask questions in the comments below or offer suggestions on new resources to attach to our resources list.

How Can You Help the Brandenburg Team?

Eastern part of Old Brandenburg (about 25%) belongs to Poland since 1945. Located in the Northeast part of Germany Brandenburg is the fifth largest state by area and the tenth by population. Potsdam is its largest city and its capital. It surrounds the city state of Berlin. It also borders the states of Mecklenburg-Vorpommern, Lower Saxony, Saxony-Anhalt, and Saxony, and the country of Poland. Part of what was the historical area of Brandenburg, the Neumark east of the Oder–Neisse line, after Germany's defeat in World War II became part of Poland.

We'd appreciate your help with sourcing, connecting, merging and fixing database errors on the profiles in this region. Click the LINKS below to get lists of profiles in Bavaria that need some love (click "get profiles" in the left column to generate a list):

They often have local records and have professors who are versed in local lore so can be a wonderful resource and many are multilingual.

From Wikipedia: Brandenburg originated in the Northern March in the 900s AD, from areas conquered from the Wends. It later became the Margraviate of Brandenburg, a major principality of the Holy Roman Empire. In the 15th century, it came under the rule of the House of Hohenzollern, which later also became the ruling house of the Duchy of Prussia and established Brandenburg-Prussia, the core of the later Kingdom of Prussia. From 1815 to 1947, Brandenburg was a province of Prussia.

Following the abolition of Prussia after World War II, Brandenburg was established as a state by the Soviet Military Administration in Germany, and became a state of the German Democratic Republic in 1949. In 1952, the state was dissolved and broken up into multiple regional districts. Following German reunification, Brandenburg was re-established in 1990 and became one of the five new states of the Federal Republic of Germany.

Lakes and hiking trails and cosmopolitan cities. This area of Germany has castles and quaint villages. Old world and futuristic blended. Cuisine is hearty and down to earth with lots of meat and potato style dishes.

This is an active Germany Project page with up-to-date information.
Last updated by Traci Thiessen: 25 Jan 2022 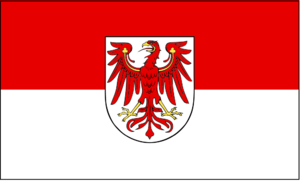 Map of Brandenburg in Germany 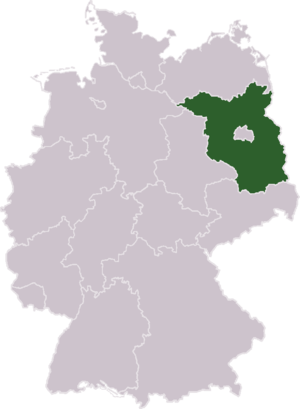 Coat of Arms of Brandenburg 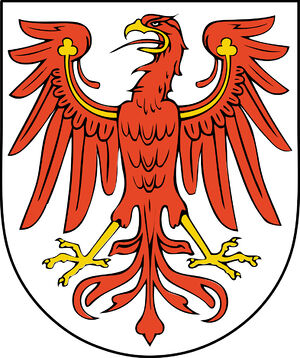 Terri (Clawson) Swift
Hi Brandenburg Team! The Profile Improvement Teams (PIT) are looking for new members! If you check the main regions page (https://www.wikitree.com/wiki/Space:Germany_Regions_Team#16_L.C3.A4nder_States_Facts_Table), you'll see that there are links to unsourced and unconnected profiles for each of the 16 regions. We also have a Data Doctors Team and we will eventually be adding Suggestions to the main regions team page as well. If you're a badged member of the Arborists project, we'd really appreciate your help in completing some merges and researching unmerged matches in German profiles. For more info on our PIT teams, see this page: https://www.wikitree.com/wiki/Space:Germany_Profile_Improvement_Team.
posted Jul 30, 2021 by Terri (Clawson) Swift

Steve Thomas
For anyone interested in the history of the Old Lutherans that left the Prussia for South Australia in the middle of 19th Century. I expect to tag about 200 Wikitree profiles with different Kreis categories from Brandenburg. For example: https://www.wikitree.com/wiki/Thiele-188 Regards, Steve
posted Feb 26, 2021 by Steve Thomas