[send private message]
This page has been accessed 155 times.

The story of the tornado that hit Brandsville, Rover & Thomasville, Thanksgiving Day, 1926. This page is from the Rover perspective of the tornado.

Background to the story:
In Rover, the Baptist church met in a building (probably on the location where it is now) in a 2-story frame building. The Baptist congregation met in the downstairs and the Odd Fellows lodge met upstairs.
Across the street, there were 2 stores, Ed White's store and Garrett's store. Riley Baty had been building a second floor on White's store as a meeting place.
The Oregon County Times-Leader (Koshkonong), Sept 2, 1926, pg 6 —
Riley Baty and sons Marion & Eddie are building a lodge hall over Ed White’s store.

The Baptist church building had burned down in March (see clipping at right).
The Oregon County Times-Leader (Koshkonong), Thur, Mar 25, 1926, pg 1 -- Fire at Rover - One night last week the big frame building used as the Baptist church downstairs and as the Odd Fellows hall upstairs burned to the ground The fire was first discovered about 2 o'clock a.m., but it was impossible to save anything from the burning building. Residents at Rover believing the fire to have been of incedinary origin, sent for blood hounds at Springfield to discover if possible, whether their beliefs were well grounded. As yet, we have heard of no definite actions being taken, If the hounds did give a clue. The building was insured for $2,000.

Fortunately for the Baptists, Rab Jolliff, a local preacher and sometimes pastor at the church, had been paying the insurance on the building. When it burned Rab received the insurance money of $2,000. In considering how to re-build, the church people decided they didn't want Rab making the decisions, so he gave the insurance money to the trustees to build another building. They didn't offer to pay him back for paying the premiums, and the trustees did not keep up the payments on the insurance. So when the tornado happened in Nov., there was no money to rebuild again.


Construction on the 2nd church began in the early Fall, with Riley Baty and sons concrete company doing the work.
The Oregon County Times-Leader (Koshkonong), Oct 7, 1926, Pg 1 —
The Baptist congregation at Rover are building a new church. It is being constructed of concrete blocks. Riley Baty & sons are the contractors.

On Thanksgiving Day, 1926 in the early evening a tornado developed and touched down in Brandsville. It ran in an almost straight line northeast from Brandsville (where 3 were killed, many injured, and many buildings destroyed), to Rover (5 were injured and 4 buildings destroyed), then near Elmer Von Allmen's farm (whose house was moved off the foundation), to Thomasville (a few roofs were blown off, but no one injured).

When the tornado hit Rover, 2 stores, the Baptist church, and 1 house were destroyed. A few people had taken refuge in White's concrete block store, but it was demolished with people injured inside. They were Mr and Mrs E.A. White, Riley Baty & son Eddie, and Gus Jolliff.

The tornado's path went through Elmer VonAllmen's farm, to Thomasville. Raymon VonAllmen was about 10 years old at the time. He remembered his dad, Elmer, grabbing the front door and holding it shut. It shook the whole house taking it off its foundation and damaging it. Son, Dean said that Elmer wasn't afraid of storms and discounted the danger until this tornado came dangerously close to them. The next morning the boys were digging a cellar. After the storm they had to tear the house down and rebuild it. The family lived in the barn for a few months while it was rebuilt.

Emma Jane (Bay) Ledbetter was married to Elijah Sanford "Eli" Trantham. They had several small children. "On a warm Thansgiving Day, a severe storm rolled by causing doors to be nailed shut. The next morning, the older 6 children went to school. (Eli) was in another state. (Emma) needed feed for the cows, so she hitched up the team to the wagon. Taking the cream, a basket of eggs" and 2 small children, "she started for Rover.... Along the road, tin in the trees frightened the team. Upon arriving in Rover, she found a tornado had demolished the town. Needing feed she persuaded the store owner to let her have a sack of what was lying on the ground." (from Oregon County [MO] History 1990, pg 254)

The Baptist church was without a building and without insurance. Rab Jolliff and another man in the church (don't know his name) took out a mortgage on their farms to build the new building that is now standing. They visited around the community trying to raise money, but weren't able to collect enough. When Rab died in 1930, he still hadn't paid off the mortgage. His son, Aaron, who inherited his farm, finally finished paying it off.

Here are 2 newspaper articles about the tornado.

The Thayer News, Dec 3, 1926, pg 1 —
3 Killed and Many Made Homeless by Tornado -
About 6:30 Thursday night, Nov. 25th, a tornado swept the town of Brandsville, leaving death and destruction in its wake.
Just a few minutes after the news was sent out, large numbers of people from Thayer, West Plains and Koshkonong rushed to Brandsville to assist in anyway possible to relieve the suffering of the injured and care for the dead. Probably 30 people were injured at Brandsville
At Rover in Oregon county, two stores, a church and one dwelling were destroyed and five persons injured.
The dead at Brandsville were Mrs. Lou Hart, an eldrly woman, Miss Averell Lyles, aged 13 years and Mr. John F. Johnson, of Thayr.v A number of thayer people were in that vicinity just a few minutes before and after the tornado Mr. W. A. Mooney and Dr. Gullic had just driven up to the Smith Garage on the highway when the wid came with all its fury Mr. Mooney said it was hard to describe it.
All the electric lights in Brandsville were out of commission, and it was not known just how much damge was done, until Friday mornng when it was seen that many people were in dire distress.
The people of Thayer, always ready to do their part to relieve suffering humanity, contributed liberally to a fund raised by Mr Mooney Friday moring for immediate relief.
On Saturday morning, pursuant to a call from the local American Legion Post, a number of out people met at the YMCA. Mr. T.W. Mesara, acting Commander, stated the object of the meeting and apointed committees to solicit throughout the town, the chairmen of the committees were Mesdames Albert Beek, W.N. Carr, Harry Miller, G.E. Gamel, Jess Hanes, D. Moore, e.E. Bateman, A.B. Salem, F.A. Barnes, W.P. Lamb and P.O, Freeman. These ladies selected other ladies to assist. the result of their work was a big truck load of clothing, bedding and groceries sent to brandsville late saturday afternoon, and other supplies to be sent later. In addition to the suppies wite a neat sum of money was raised, this in addition to about $100 raised Friday by Mr. Mooney. Probably $500 in cash was raised in Thayer.
The following is the list of dead and injured, given out by the West Plains quill:
The dead, Mrs. Lou Hart, Brandsville, Miss Averell Lyles, Brandsville, John Johnson, Thayer.
At Brandsville the injured, Mrs. John Johnson, Thayer; Fred Lyle, Mrs. Fred Lyle and 5 Lyle children; John McMillin, 3 ribs broken; Mrs. W.W. Jacobs, collar bone broken, other injuries; Miss Lillie McMillin, severe ankle injury; Carl Gullic and Russell McMillin, 5 other children of the John McMillin family; Mrs Phin McMillin, Mrs Ralph Palmer's baby, Wilma Bussell, Andy Harbeston; Miss Jacobs, bad cuts on chin, leg and ankle; "Uncle Dick" Smith, hand and back injured.
At Rover, Riley Baty, three broken ribs and other injuries, Eddie Baty, Ed White, Mrs. Ed White, Capt. Gus Jolliff.

The Oregon County Times-Leader (Koshkonong), Dec 2, 1926, pg 1 —
Tonado Kills Many - Much Damage in Brandsville —
A tornado which swept through the eastern part of Howell and western part of Oregon counties destroyed major portion of Brandsville and Rover and did much damage near Thomasvile.
The storm struck at 6:30 o’clock, making a wide swath through the town. Three lives were lost there.
Mrs. Hart, a widow, was blown from her home into the street and instantly killed. John Johnson, a merchant of Thayer, had been hunting. He was driving along the highway when the tornado struck his car, hurling it against a telephone pole. He was instantly killed. His wife, also in the car, was slightly injured.
Mary Lile, daughter of Fred Lile was found dangerously injured. She was taken to the Christa Hogan hospital in West Plains where she died that night.
The large wine cellars of the Brandsville Fruit company were crushed like an egg shell. The canning factory was blown across the Frisco tracks. The community house was wrecked. the Catholic church was blown from the foundation into the street.
Thirty-two buildings were destroyed by the storm, nearly all of which were homes, and it is estimated that there (are) at least one hundred homeless there.
The stores of Ramsey & Kemp, Dubois & Son, and Howard Bales and George Bartley’s garage were badly damaged.
At Rover the concrete store building of E.A. White was demolished. Several persons seeking refuge from the storm were in the store, Mr and Mrs White, Riley Baty, and Gus Jolliff were injured. White’s mill was also destroyed. L.A. Garrett’s store at this point was leveled to the (ground) and the new Baptist church was demolilshed. …
The storm struck near Thomasville where the damage was not so great. Houses were unroofed, barns blown down and stock killed, but no person was injured. …
Citizens from Thayer, West Plains and Koshkonong were in Brandsville in a very short time to help care for the wounded and returned Friday morning with supplies for the homeless. …(cont) 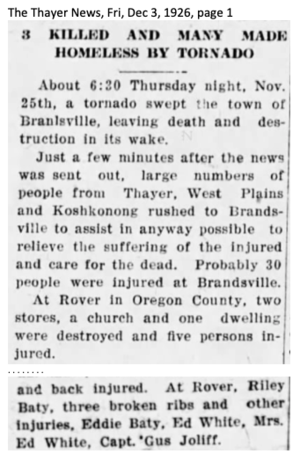 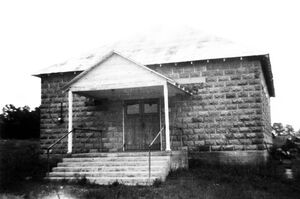 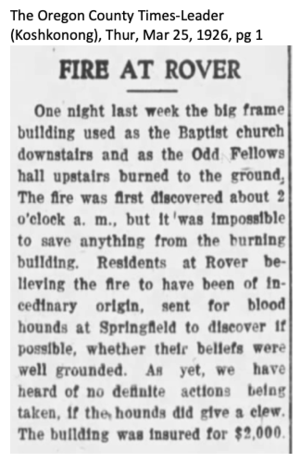