[send private message]
This page has been accessed 524 times.

This profile is part of the Braxton County, West Virginia One Place Study.

History
Braxton County was created on January 15, 1836, from Kanawha, Lewis, and Nicholas counties. while still a county in Virginia, which later became West Virginia in June 1863. The county is named for Carter Braxton, a Virginia statesman and a signer of the Declaration of Independence. The County seat is Sutton and named for founder John D. Sutton. The Carpenter family, who settled at the mouth of Holly River in the 1780s are believed to be the first settlers of Braxton County. [1]

Geography
The center of West Virginia is located in in Braxton County, south of Flatwoods, about five miles southeast of Sutton and four miles west of Centralia, in the Elk River Wildlife Management Area. The county is part of the rolling central highlands in which elevations ranging from 760 feet to 2,180 feet. The main water ways are the Elk, Little Kanawha, Holly, Birch, and Little Birch rivers.[3]

Formed From
Kanawha, Lewis, and Nicholas counties on January 15, 1836. 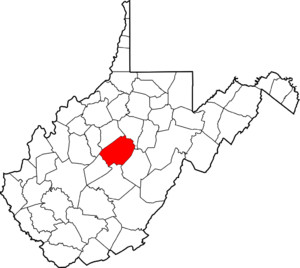