No Profile Manager [adopt this profile]
This page has been accessed 825 times.

5440 Broadway (originally 18 East Main Street), the Miller-Mackey House, is a historic home located at Lancaster in Erie County, New York. It is a locally distinctive example of the Colonial Revival style of architecture built in 1905 for Dr. John G. Miller. In 1957, the Depew Lancaster Boys' Club purchased the property and since that time it has been used as a recreational and social facility for the area's young people.

The Miller-Mackey House is located at 5440 Broadway in the Village of Lancaster, Erie County, approximately twelve miles east of Buffalo, in western New York. The property is a two-and-one-half-story Colonial Revival-style residential building of brick construction, presently painted red, set upon a foundation of coursed rock-faced ashlar sandstone and capped with a truncated hipped roof. Its north-south orientation faces Broadway, the principal east-west thoroughfare of the village. The house was converted into a boys’ and girls’ club in 1957 and a relatively low-scale, one-story masonry gymnasium addition was appended to the rear of the house.

The four-bay facade of the house includes a two-story bay window on the east side and a one-story porch which extends across the remaining three bays. The bay window has recessed-paneled wood aprons beneath the individual window units and is capped with a projecting cornice trimmed with modillions and dentils. The porch is flat-roofed and is supported by composite pilasters and columns grouped in clusters of three. It also features a modillioned cornice with dentilled trim. All windows are flat-topped, with one-over-one sash. The east elevation is of seven bays and includes an oriel of wood which projects outward from the second story approximately one-third of the way back from the facade. Also on the east side is a small wood entrance porch with a single door and paired windows; this porch is hipped-roofed with modillions under the eaves. The west elevation is also of seven bays, with the last four bays extending outward to form an ell. At the rear of the west elevation is a one-story bay window.

The truncated hipped roof of the Miller-Mackey House is punctuated by five tall brick chimneys with corbeled brickwork. Historic photographs show an original open balustrade extending around the flat truncation of the roof; this feature was removed at an indeterminate time. On the facade are two broken pediment dormers, each containing one large center window flanked by two smaller side windows. Three additional dormers are on the east elevation and two are on the west. Windows in the dormers are flat-topped, with double-hung sash.

The interior of the house originally contained professional office space on the east side of the first story and residential living areas on the balance of the first story and on the entirety of the second. The interior underwent its first alterations when Dr. Clarence Mackey died in 1946. At this time, the second story was converted into several apartments. The interior retains some of its original features, including historic woodwork at several points, art glass, and some room arrangements and volumes.

Along the entire rear of the building of a flat-roofed, L-shaped gymnasium addition. It contains few windows and is devoid of architectural detail.

The Miller-Mackey House is sited on a residential lot about one block east of the central business district of the Village of Lancaster. The lot is essentially flat and the house sits back from the street. The property has mature deciduous trees both in a planting strip between the sidewalk and the street and in the interior of the lot. A paved parking area is on the east side of the house. No outbuildings are on the property. Historically, a horseshoe-shaped driveway on the east side of the house led northward from Broadway to a large carriage house which was located behind the house. The carriage house was razed c. 1960.

The Miller-Mackey House is significant under National Register Criterion C, for architecture, as a well-preserved, locally-distinctive example of the Colonial Revival style of architecture from the early twentieth century. The property enjoyed a long association with two locally-prominent families who were active both in medicine and in the commercial life of the community. Built c. 1905, the residence is associated with Historic Context II, “Socioeconomic Growth and Maturity of the Village of Lancaster, 1850-1949,” as identified in the National Register of Historic Places Multiple Property Documentation Form, Historic and Architectural Resources of the Village of Lancaster, Erie County New York. The Miller-Mackey House satisfies the registration requirements set forth in Section F of the MPDF for Property Type I, Residential Architecture, and on July 29, 1993 was determined eligible for the National Register by the Keeper of the Register under Executive Order 11593.

With respect to Criterion C significance, the Miller-Mackey House retains a high level of architectural integrity despite the addition of the gymnasium at the rear of the building. The house is a locally-important example of Colonial Revival-style architecture, whose typical and localized characteristics are described in the MPDF.

The house was built for Dr. John G. Miller (1855-1935). A native of Sheldon, New York, John Miller received his secondary education at the East Aurora Free Academy. Enrolling at the University of Buffalo Medical School, he graduated in 1876. He continued his education at Bellevue Hospital, New York City, and upon completing his studies in1878, he established his practice in Lancaster. Dr. Miller practiced medicine in the Village until his death nearly sixty years later. Enjoying the fruits of a successful practice, he built this new home which also contained his professional offices. During his long association with the Village of Lancaster, John Miller served as health officer for twenty years and was on the Board of Education for forty-two years, twenty-eight of which he served as president. During his tenure, the Lancaster school system grew along with the population, and under Miller’s leadership, the 1924 Lancaster High School was built on Aurora Street.

John Miller was a business leader as well as medical practitioner. In 1894, he was one of the organizers of the Bank of Lancaster and served for many years on its board of directors. Following a disastrous 1896 fire which eradicated most of the downtown, Dr. Miller was a member of the Bank’s building committee and oversaw the construction of the first building in the Village erected expressly for use as a bank. When the institution was organized, Miller was elected its vice president, a position which he held until the 1929 death of president John O. Garretsee. At that time–at seventy-four–John Miller was elected president of the institution. In addition to his business responsibilities and despite age and infirmity, Dr. Miller continued his medical practice until his death in1935.

Dr. John G. Miller married Johanna Bartholomy in 1880. In 1911, their daughter, Marjorie, wed Dr. Clarence Herbert Mackey and the Mackeys began an association with the house which lasted into the second half of the twentieth century. Clarence H. Mackey (1887-1946) moved to Lancaster from Buffalo as a teenager. Following his 1906 graduation from Buffalo’s Lafayette High School, he entered the Cornell University Medical College, from which he received his medical degree in 1910. Dr. Mackey established his practice in Lancaster and shared offices with his father-in-law in Dr. John Miller’s house-office. Dr. Clarence Mackey served in the Army Medical Corps during World War One, entering in 1917 as a First Lieutenant and being discharge in 1919 as a Captain. Like his father-in-law, Dr. Mackey was active in his community. He followed Dr. Miller’s footsteps as health office for the Village and Town of Lancaster and also served as school physician for the Village and the Town after he returned from the War. Clarence and Marjorie Miller Mackey occupied the house after the death of the Millers and Dr. Mackey maintained his office in the house until his own death; his widow remained in the house until she died in 1955.

In 1957, the Depew Lancaster Boys’ Club purchased the property for $40,000 from Marjorie Mackey’s estate. Now known as the Boys’ and Girls’ Club, the organization has used the property since that time as a recreational and social facility for the area’s young people.[1]

Continuing East on the South side is Dr._James_Home 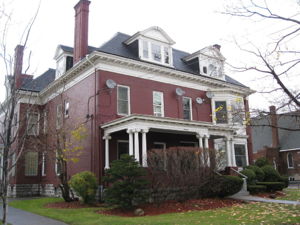 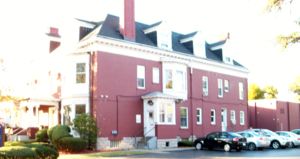 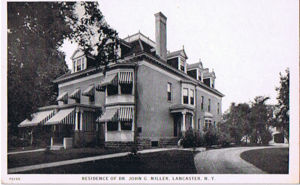 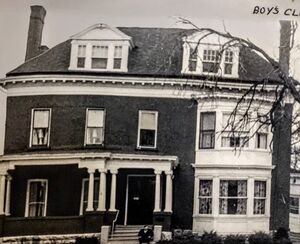