Surnames/tags: Clark Lester
No Profile Manager [adopt this profile]
This page has been accessed 632 times.

The Clark-Lester House is a historic home located at Lancaster in Erie County, New York. It is a Queen Anne style dwelling constructed in 1891. It was home to noted psychology professor Olive Lester, who lived here for most of her adult life until May 1996. She was the first woman chair of any of the departments at the University at Buffalo. It is now operated as a bed and breakfast.

The Clark-Lester House is located at 5497 Broadway (originally 32 East Main Street) in the Village of Lancaster, Erie County, approximately twelve miles east of Buffalo, in western New York. The property is a two and one-half-story wood frame Queen Anne-style residence built upon a foundation of coursed rubble sandstone and capped with a front-facing, cross-gable, asphalt-shingled roof. The house is minimally asymmetrical in massing. Extending across the facade (Photos 1 and 2) is an original open shed-roofed porch of wood with lattice aprons, ornamented by a balustrade with turned posts reminiscent of the Eastlake style, curved brackets, and plain wood balusters. The porch is raised above grade and at the west corner of the facade a wood stair with a railing of a similar design to that of the porch leads to the porch and to the main entrance of the house. On the second story an open balcony is offset over the main entrance. The balcony is gable-roofed, with original turned supports and intact curved brackets (Photos 1, 2, and 3). The pediment of the gable on the facade of the house extends slightly beyond the plane of the second story and contains a pair of “Queen Anne”-style windows, with 16/1 sash. On the east elevation (Photo 4) is a two-story bay window with the exterior of the first story finished in recessed-paneled wood and that of the second in square-butt shingles. The bay window terminates in an overhanging extended gable at attic height, supported by curvilinear brackets and trimmed with pendants, a shingled pediment, and “Queen Anne”-style sash. The west elevation includes a two-story projecting bay with chamfered corners on the first story. At the rear of the main house (Photo 5), a one and one-half-story gable-roofed original wing contains the kitchen on the first story and a rear bedroom on the second; the rear bedroom was probably originally used by servants. The body of the house is clad in a variety of wood finishes, including clapboard on the first story and both imbricated and square-butt shingles on the second story and in the pediments of the gables, all of which combine to give the building the varied surface texture characteristic of the Queen Anne style. Brick chimneys with little corbeling rise above the roofline on the east elevation and on the rear of the main house. All fenestration on the house is flat-topped, with simple molded heads, and all but the “Queen Anne”-style windows are one-over-one lights.

The interior of the Clark-Lester House is little altered from the original. The first story contains seven rooms and a bathroom, including a kitchen and pantry at the rear of the house. The second story includes five bedrooms and a bathroom and the third story has two finished rooms. The main entrance from the front porch leads into a stair hall with a double-run stair (Photo 6) trimmed with a paneled wood newel, a side bulkhead, and turned balusters. A secondary stair leads from the dining room to the landing of the main stair (Photo 7). Most woodwork is original, although painted, with modest molding profiles. Floor-to-ceiling heights are original.

The Clark-Lester House is located on a residential lot about one block east of the central business district of the Village of Lancaster along Broadway (U. S. Route 20). The front portion of the lot is essentially flat, while the rear slopes sharply to Plumbottom Creek, which crosses the property near the rear lot line. The house sits back from the street with mature deciduous trees both in a planting strip between the sidewalk and the street and on the interior of the property.

The Clark-Lester House is significant under National Register Criterion C, for architecture, as a well-preserved, locally-distinctive example of the Queen Anne style of architecture from the last decade of the nineteenth century. Built c. 1891, the house is associated with Historic Context II, “Socioeconomic Growth and Maturity of the Village of Lancaster, 1850-1949,” as identified in the National Register of Historic Places Multiple Property Documentation Form, Historic and Architectural Resources of the Village of Lancaster, Erie County New York. The Clark-Lester House satisfies the registration requirements set forth in Section F of the MPDF for Property Type I, Residential Architecture, and on July 29, 1993 was determined eligible for the National Register by the Keeper of the Register under Executive Order 11593.

With respect to Criterion C significance, the Clark-Lester House retains a high level of architectural integrity and is a locally-important example of Queen Anne-style residential design. This design mode flourished in the last quarter of the nineteenth century in America and was one of the more extravagant of the various Victorian-era design modes. Queen Anne-style design is characterized by an irregularity of plan and materials, with an equally irregular roof pattern, and often including a polychrome effect gained from the use of a variety of building materials. When executed solely in wood, Queen Anne-style architecture often employs a variety of wood finishes to achieve its variegated effect. With the 1930s demolition of the Grimes-Davis House at the corner of Broadway and Central Avenue, the Clark-Lester House became the Village’s most distinctive example of Queen Anne-style design.

Public records indicate that the house was built for Myron H. Clark, who had acquired the property in 1891. In 1895, the house was acquired by Mary Lester Turk, who sold it to her brother, Levant D. Lester, in 1911. Levant Lester (1875-1935) was born in the rural Town of Newstead, Erie County, and received his early education in the district schools. He matriculated to Parker Union School, which his father, [[Lester-1824|Garra Lester], had helped to establish at Clarence Hollow. After completing his secondary education, Levant taught school during the 1893 and 1894 terms, after which time he entered law school at the University of Buffalo. Graduating in 1897, he was admitted to practice before the Appellate Division of the Supreme Court, Fourth Department, in early 1898. His career was long and distinguished, including service as attorney to the Villages of Blasdell, Depew, and to his home, Lancaster. He occupied this house from 1911 until his death nearly a quarter-century later.

The house remained in the family and was occupied by Levant's spouse, Martha, and daughter, Olive Peckham Lester (1903-1996); Olive continued to live here for most of her adult life, until May, 1996, when she entered a nursing home five months before her death. She attended the Village of Lancaster schools and graduated from Lancaster High School, and attended the University of Buffalo and received her undergraduate and Master’s degrees in 1924 and 1925, respectively. Immediately upon receiving her Master’s degree, she joined the faculty of the University of Buffalo’s Psychology Department. She returned to graduate study at the University of Chicago where she was inducted into Phi Beta Kappa and earned the Ph.D. degree in 1931. She remained at the University of Buffalo for her entire forty-nine-year teaching career which ended with her retirement in 1974. She served as Assistant Professor of Psychology–in days when it was rare for women to hold any significant academic rank.

Except for her time at the University of Chicago, she maintained residence at the family home in Lancaster. She eventually was named chairman of the Psychology Department, becoming the first woman chair of any of the University’s departments. She authored a number of important professional papers, including “Social Competence of Identical Twins” and “Changes in Attitudes of College Students During the Years at College and for Two Years Following Graduation.” Always an educational innovator, she planned and taught the first psychology classes offered to student nurses enrolled in the Buffalo nursing schools of Meyer, Deaconess, and Childrens’ Hospitals. Her skills as an educator earned her three citations for outstanding teaching, two from the University of Buffalo and one from the University’s College of Arts and Sciences.

From 1935 until 1985, Dr. Olive Lester shared the house with another leading Buffalo-area woman educator, Emma E. Deters. Emma Deters was the first registrar of the University of Buffalo, a position which she held from 1916 until 1958.

The Clark-Lester House stands as an architecturally-significant and intact representative example of Queen Anne residential design in Lancaster.

Traveling east on Broadway, on the south side is the Carpenter-Draper House 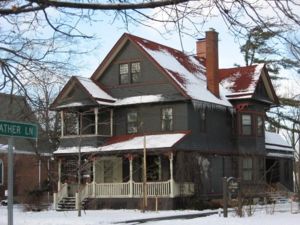 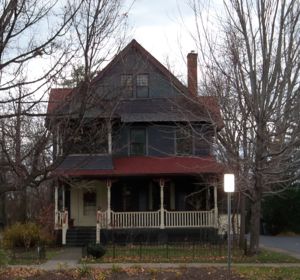 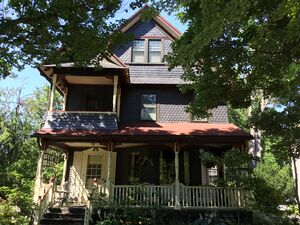