No Profile Manager [adopt this profile]
This page has been accessed 596 times.

Bruce—Briggs Brick Block is a historic rowhouse block located at Lancaster in Erie County, New York. It is a mid-19th century brick structure unique in Western New York, which incorporates both Greek Revival and Italianate style decorative details. The rowhouses were built for George Bruce, one of the early settlers of Lancaster. It was listed on the National Register of Historic Places in 1999

The Bruce-Briggs Brick Block is located at 5481-5483-5485 Broadway in the Village of Lancaster, Erie County, approximately twelve miles east of Buffalo, in western New York. The property is a three-unit brick rowhouse of two-and-one-half-stories, with design characteristics drawn from both the Greek Revival and Italianate styles (Photo 1). Additions of wood and brick were built at the rear of each unit at indeterminate times.

The building rests on a stone foundation and is built of brick, presently painted, laid in a common-bond pattern. The roof is of a laterally-oriented gabled form. Each of the identical three units has a three-bay facade with all fenestration flat-topped, typical of the Greek Revival style. Windows rest on stone sills and are capped with unornamented smooth-dressed stone lintels. Some original operable louvered shutters have been retained, along with some six-over-six sash (Photos 1 and 2). The attics of each of the units have eyebrow windows aligned with the windows on the first and second story. The principal entrance of each unit is through a double door offset on the eastern-most bay of the facade. The doorways are recessed, with paneled reveals, and originally contained typically Italianate-style door units with upper sections featuring a round-arched window and lower sections with a recessed panel (Photo 3). Some alterations have occurred to the doors.

Parapets rise above the roofline between each unit (Photo 1) and brick chimneys are at the gable ends of each. Beneath the eaves, sandwich brackets, characteristic of the Italianate style, correspond with each of the bays on the facade; the brackets appear in pairs on the gable ends.

The rear (south elevation) of the rowhouses contains two bays per unit, with segmental-arched windows on the second stories and eyebrow windows at attic level (Photo 4). One-story gable-roofed wings of brick and wood construction extend away from the main building. These elements have flat-topped windows and are in varying conditions. Some portions of these appendages appear to be original and others are additions, installed at indeterminate times.

The westernmost unit contains 1,764 square feet, while the areas of the other two are 1,736 s.f. each. The larger unit has been converted for multi-family occupancy, while the other two retain their original single-family character. As originally constructed, the interior of each row house incorporated a side hallway, front and back parlors, and a diningroom, with a kitchen in the 1-story wing at the rear, and bedrooms on the second story. The interiors of the units have been altered to differing degrees; representative of the interior character of the property is the middle unit (5483 Broadway), featuring an open, straight run stair with newel and turned balustrade (Photo 5) and faux marble slate fireplaces (Photo 6).

The building is set back from the street along Broadway with no associated dependen¬cies.

The Bruce-Briggs Brick Block is significant under National Register Criterion C for architecture, as an intact, locally-significant, and distinctive example of mid-19th-century rowhouse design, unique in this western New York State village, which incorporates both Greek Revival and Italianate-style decorative details. Built c. 1855 and associated with the first decade of the growth of this village following its incorporation in 1849, the property is representative of the second historic context, “Socioeconomic Growth and Maturity of the Village of Lancaster 1850-1949,” as identified in the National Register of Historic Places Multiple Property Documentation Form, Historic and Architectural Resources of the Village of Lancaster, Erie County New York. The rowhouses retain both their period physical characteristics and integrity of overall design and satisfy the registration requirements set forth in Section F of the MPDF for Property Type I, Residential Architecture. On July 29, 1993 the property was determined eligible for the National Register by the Keeper of the Register under Executive Order 11593.

The rowhouses were built for George Bruce, president of the Merchants Bank. Bruce was one of the early settlers of the Town of Lancaster and was a leading citizen during the first quarter-century of the existence of the incorporated Village of Lancaster. He was one of the first three trustees of the Presbyterian Church of Cayuga Creek (today the Lancaster Presbyterian Church), and is shown by local public records to have also been a major landholder in this area of the Holland Purchase. In one of his acquisitions in the Village of Lancaster, in 1852 he paid $850.00 to Catherine Sallander for this lot and erected the rowhouses shortly thereafter. Bruce eventually moved westward and in 1867, when a citizen of Adrian, Michigan, he sold his Lancaster property to Ebenezer Briggs. The deed referenced the property to contain “that block of buildings known as Bruce’s Brick Block.”

Ebenezer Briggs was also a community leader who dealt widely in the purchase and resale of land. Among his holdings was a tract on Sport Street, north of Broadway, which contained the community’s race track. In 1873 the new Lancaster High School was erected on the site of the race track, which had been donated to the community by its owner.

Ebenezer Briggs retained ownership of the rowhouses for little more than a decade. Public records suggest that Briggs died c. 1877. The rowhouse lot was partitioned for the first time in 1878, by which time it was described in the deed as the “Briggs Brick Block.” The west unit was sold to Susan McPherson, the middle to J. F. Hitchcock and Susan McPherson, and the west unit to J. F. Hitchcock. The 1880 county atlas recorded J. F. Hitchcock as owning the eastern unit and Dr. G. W. McPherson as owning both the middle and the western units.

Dr. George William McPherson (1841-1934) had come to Lancaster in 1871 to practice medicine. He became another leading Lancastrian associated with this property, serving as a trustee of the local Methodist Episcopal Church and practicing medicine in the Village for forty-two years until leaving for Los Angeles in 1913 where he died at the age of ninety-three.

Rowhouses as house types were never very common in Erie County, and less common in rural settings such as Lancaster. The Bruce-Briggs Brick Block is one of two sets of rowhouses which were built on Broadway. The other, known as the Dykstra Row, was a four-unit Italianate-style complex at 5466 Broadway built by one of the Dutch families who emigrated from the Netherlands to Lancaster in 1849; it burned in 1970 and was replaced by the Lancaster Public Library. 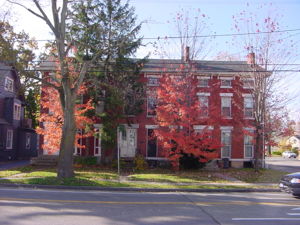 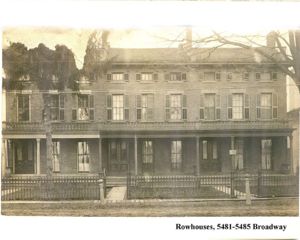 Leave a message for others who see this profile.
There are no comments yet.
Login to post a comment.
Marie Bernier
There was another rowhouse on the north side of broadway where the current Lancaster Library stands. In the late 1950's and early 60's it was apartments and the office of Dr. Goldfarb DDS.
posted Jan 25, 2018 by Marie Bernier