Lancaster Masonic Lodge Hall is a historic building located at Lancaster in Erie County, New York. It is a locally distinctive example of the Neo-Classical Revival style of architecture. Built between 1916 and 1919 as a meeting hall for the local Masons (DePew Lodge No. 823, which no longer exists). Today, it is used as a commercial office building. It was listed on the National Register of Historic Places in 1999.

The Depew Lodge No. 823, Free & Accepted Masons, is located at 5497 Broadway in the Village of Lancaster, Erie County, approximately twelve miles east of Buffalo, in western New York. The Lodge is a large rectangular building of rock-faced ashlar stone construction, measuring 39' by 99' in overall dimension. It is located three blocks east of the central business district of the Village, on a flat lot on the south side of Broadway (U.S. Route 20) in a generally residential neighborhood characterized by detached homes and a scattering of institutional buildings built between the 1830s and the last quarter of the twentieth century. The Lodge building is little altered from the original and retains a high degree of architectural integrity.

Beginning with the pedimented portico of the main facade, the Masonic Lodge consists of three distinct units. A broad stone stairway with six steps leads from grade to a tetrastyle Doric portico, which dominates the facade and is of smooth-dressed ashar. The portico measures 35' by 10' and includes fluted stone columns and rectilinear pilasters which support an entablature and pediment. The entablature is trimmed with triglyphs and the pediment with metopies. Centered in the pediment is an oculus with art glass depicting the masonic emblem. At the front corners of the portico are two original cast-iron light poles with stylized floral bases and fluted columns. The original round glass globes were replaced by the existing acorn-shaped while glass globes. Within the context of the National Register, the lights are considered to be significant historic landscape features but since they are essentially part of the portico, they are not included in the resource count.

The second section, immediately behind the portico, is a three-story shallow hipped-roofed rectangular section, 29' by 39' containing entrance halls, stairs, and a series of rooms originally associated with various fraternal functions. This section is three bays by three bays; on the north elevation is the facade of the building, which is arranged symmetrically and includes a centered doorway on the first story. The main door is set within a modest frame with dentil trim. On the right (west) elevation is a side entrance to the building, with a single wood-paneled door shielded by a curvilinear hood, also of wood construction. On both the east and west sides of this section are exterior stone chimneys which rise approximately six feet above the roofline. Fenestration on this section is flat-topped, with six-over-six windows set in unadorned surrounds.

The third section of the Masonic Lodge is the largest, measuring 71' by 39'. Located at the rear of the building is a public hall which rises through the first and second story; the formal lodge room is on the third. The east and west elevations of this section have six bays each. At the level of the basement are flat-topped windows. At the front and rear of the first story are small, flat-topped, double-hung windows between which are four large tri-partite windows, set in round-arched openings and incorporating flat-topped sash and round-arched transoms; some sash has been replaced with units which retain the overall form and character of the original. Immediately below the eaves along the side elevations of this section is a series of nine single-hung, four-light windows. The rear elevation of the Lodge has one opening on the second story, containing a single door which opens onto a metal fire escape. The pediment of the gable end of this section features a partial return of the cornice and a semi-elliptical fanlight capped with radiating stone voussoirs.

The interior of the Lodge Hall has been altered minimally from the original and, like the exterior, retains a high degree of architectural integrity. The basement was originally equipped with a small bowling alley and a swimming pool; a 1940s fire destroyed these features and the subsequent reconstruction of the basement resulted in the existing kitchen/storage/service area configuration. As noted above, the first story is arranged into entrance hall, reception rooms, and restrooms near the front of the building and a large assembly hall with a stage at the rear. The third story contains the Lodge Hall itself at the rear and other rooms historically associated with fraternal activities at the front. Woodwork is not extravagant, but generally retains its original vanished, unpainted finish.

No outbuildings are associated with the property and historic photos and fire insurance maps indicate that no dependencies were ever associated with the facility. The building sits back from the public sidewalk, with a private walkway leading southward from Broadway to the entrance stair. Historic photos show three sidewalks originally leading to the building from the street; one led to each corner of the portico and one led from the center of the property to the main steps. Also, the grounds surrounding the Lodge were originally landscaped and grassy; presently, asphalt-paved parking areas are on both the east and west sides and at the rear (south). The Depew Lodge No. 823 F & A M is significant under National Register Criterion C, for architecture, as a locally-distinctive example of the Neo-Classical Revival style of architecture and as a representative example of the work of Buffalo architects Mann and Cook. The building is associated with Historic Context II, 'Socioeconomic Growth and Maturity of the Village of Lancaster, 1850-1949,' as identified in the National Register of Historic Places Multiple Property Documentation Form, Historic and Architectural Resources of the Village of Lancaster, Erie County New York. The property meets the registration requirements set forth in Section F of the MPDF for Property Type IV, Public- and Private-Sector Civic Architecture, and on July 29, 1993 was determined eligible for the National Register by the Keeper of the Register under Executive Order 11593.

The Depew Lodge No. 823 F & A M was built between 1916 and 1919 for the local Masons, whose organization was located in Lancaster although named for Chauncey Depew, President of the New York Central and Hudson River Railroad. The builder was Frank G. Hansel, of Buffalo, who used some of the stones from the Maute Foundry, a mid-nineteenth-century Lancaster industry, in the construction of the Lodge. Amid great celebration, Thomas Penny, Grand Master of the Masons of the State of New York, laid the cornerstone on September 16, 1916, but the building was not completed until 1919–likely due to the intervention of World War One. It has served as the Masonic Temple from the time of its completion.

The Lodge is the Village’s finest Neo-Classical Revival-style building, and, indeed, stands as one of the best examples of this twentieth-century style in the region. The Neo-Classical Revival marked a rekindling of interest in the Greek and Roman modes of design and detailing whose early nineteenth-century rebirth as the Classical Revival fell out of fashion before the Civil War. The resurrected style emerged as a clear and definable reaction against the flamboyance of the Victorian period. A small number of residences were constructed in the Neo-Classical Revival style, but the majority of the buildings executed in this mode were institutional in function and included banks, libraries, municipal buildings and fraternal facilities such as the Depew Lodge. These properties incorporate classical elements such as an overall formality and regularity of massing, trabeated openings, low-pitched roofs, columnation, and other similar articulation borrowed from the design tenets of ancient Greece and Rome.

The building is also significant as the work of Buffalo architect Harold Jewett Cook (1885-1933). A New York City native, Harold Cook graduated from the Columbia University School of Architecture and in 1905 opened his first office in Little Falls, New York. His obituary related that he located in Buffalo in 1908 and remained there for the balance of his life. The Depew Lodge was designed during Harold Cook’s eight-year partnership (1912-1920) with Paul F. Mann. Despite Cook’s untimely death at forty-eight years of age, he was widely know as a specialist in institutional design, particularly banks, which he designed across New York State (including Buffalo’s 1921 Liberty Bank at 2221 Seneca Street) and as far away as Pittsburgh. Among his other major commissions in Buffalo were three churches and the 1925 Scottish Rite Temple, as well as Masonic Temples in Lockport and Little Falls, New York 'and many residences in various locations.' The Depew Lodge retains a high level of architectural integrity and is the only documented examples of Cook’s work within the Village of Lancaster. 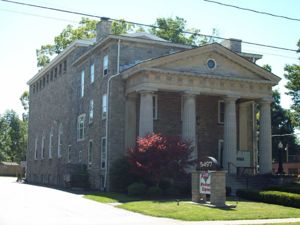