Liebler—Rohl Gasoline Station is a historic filling station located at Lancaster in Erie County, New York. It is the Village of Lancaster's sole example of historic 20th century roadside commercial architecture. It is in the Tudor Revival style of architecture. It operated as a gasoline station into the 1960s,

Typically, gas stations were erected on prominent corner lots, often replacing homes in residential sections. This building was built by leading Western New York builder John D. Rademacher in 1935. The business was operated by Lieblers and later by the Rohls. It retained its original use in the 1960s. It was later adapted as a gift shop and now serves as a seasonal ice cream shop.

currently it operates as a seasonal ice cream shop, known as Frosty's.

"The Liebler-Rohl Gasoline Station, located at 5500 Broadway, in the Village of Lancaster, New York, is a c. 1935 masonry building, one story in height and small in scale, with a floor area of 312 s.f. Originally erected as an automobile gasoline station, it is located on a flat corner lot about three blocks east of the central business district of the Village, in a neighborhood which was traditionally residential in character but which, over the last half-century, has been modified to its present mixed-use character. Although altered from its original use, the building retains a high degree of architectural integrity.

The Liebler-Rohl Gasoline Station is essentially rectangular in form, with a slate-clad hipped roof with tile coping along the ridges. A triangular eyebrow window is on the west hip of the roof. The exterior surfaces of the building are parged with rough-textured stucco. The facade and east side are the most highly articulated elevations of this diminutive building. On the left side of the facade is a round-arched window beside which is the principal entrance to the building, which also incorporates a round-arched opening. Both the window and the door opening are trimmed with ornamental brickwork executed in a dark red to contrast with the off-white of the stucco. On the right side of the facade is a one-story bay window above which is a projecting gable containing an original clock in the pediment. The roofline of this feature terminates in a semi-circular curvilinear roof form. The gable is further trimmed with a half-timbered pediment, typical of the Tudor Revival style. The east side features half-timbering as well, along with a large, multi-light fixed-sash window with a curvilinear-arched head. The two-bay west elevation is minimally ornamented and is two bays in width, with a single flat-topped window unit in each bay. The two-bay rear elevation has single door openings accessing the interior of the building.

The sparse interior of this diminutive building has been adapted for its present food service-related use.

The Liebler-Rohl Gasoline Station has no associated outbuildings. The surfaces immediately surrounding the building are asphalt-paved. Any historic petroleum-associated features (pumps, pump island, etc.) have been removed. The Liebler-Rohl Gasoline Station is significant under National Register Criterion C, for architecture, as the Village of Lancaster’s sole example of historic twentieth-century roadside commercial architecture; it is also significant as a locally-rare and highly distinctive example of the Tudor Revival style of architecture. Built c. 1935, the former gasoline station is associated with the second historic context, ‘‘Socioeconomic Growth and Maturity of the Village of Lancaster, 1850-1949,’’ as identified in the National Register of Historic Places Multiple Property Documentation Form, Historic and Architectural Resources of the Village of Lancaster, Erie County New York. The property meets the registration requirements set forth in Section F of the MPDF for Property Type II, commercial architecture, and on July 29, 1993 was determined eligible for the National Register by the Keeper of the Register under Executive Order 11593.

The Liebler-Rohl Gasoline Station was built at a time when the automobile had become entrenched in the scene of American transportation. This particular station bridges the architectural gap between the picturesque gasoline stations of the late 1920s and early ‘thirties and the era of the ‘‘box’’ stations of industrial designer Walter Dorwin Teague, which often incorporated Streamline Moderne massing and detailing. It is characteristic of the type of high-style stations that replaced ramshackle ‘‘gas shacks’’ in the wake of nationwide competitions sponsored in 1927 by Mrs. John D. Rockefeller, Jr., the Art Center of New York, the American Civic Association, and the Adolph Goebel Company.

Typically, gasoline stations such as this were erected on prominent corner lots, often replacing homes in residential sections. This building was built in the mid-1930s by contractor John D. Rademacher. A leading western New York State builder, Rademacher and his sons were responsible for the construction and repair of many important building throughout the region. During the Depression, this station represented a much smaller job than those with which the Rademacher firm was generally associated. The business was operated by the Lieblers and later by the Rohls. The station retained its original use into the 1960s. It was later adapted as a gift shop and at the time of writing serves as a seasonal ice cream shop." 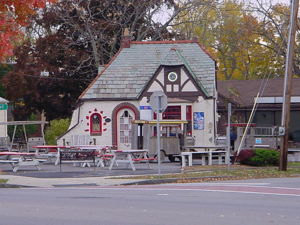 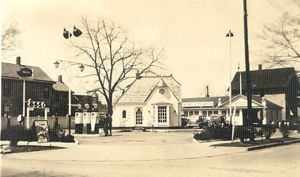