No Profile Manager [adopt this profile]
This page has been accessed 502 times.

Dr. John J. Nowak House is a historic home located at Lancaster in Erie County, New York. It is a locally significant and distinct example of the Spanish Revival style built for Dr. John J. Nowak in 1930. Several additions were built throughout the years and it is now used as a nursing home.

Incorporates what was once the private home of Charles R. Huntley.

The Dr. John J. Nowak House is located at 5539 Broadway in the Village of Lancas­ter, Erie County, approximately twelve miles east of Buffalo, in western New York. The Nowak House is a two-and-one-half-story Spanish Revival-style residential building of brick construction, to which have been appended several one-story additions of institutional character which are associated with the property’s current use as a nursing home. The building retains architectural integrity; the additions extend from the south end of the house and do not seriously compromise the overall character of the building as the Village of Lancaster’s only Spanish Revival-style building from the 1920s.

The Dr. John Nowak House is finished with an exterior surface of yellow brick. The building exhibits a symmetrical facade, oriented to the east and set perpendicular to Broadway, which runs in an east-west direction immediately north of the house. The three-bay facade incorporates a center bay which contains the main entrance to the residence and features a single door with art glass sidelights, shielded by a gable-roofed portico supported by fluted composite columns. The flanking wings consist of projecting box-end bays with a pedimented gable roof. All exterior corners are ornamented with brick quoins; corbeled brick trim is also found on other surface areas. Fenestration is placed symmetrically and features flat-topped window forms, with single and tri-partite windows set on stone sills and capped with soldier-course brick voussoirs. Most sash is six-over-six lights.

Side wings project from the north and south elevations; the wing on the north includes a wood sleeping porch on the second story, while the south wing has a second-story sunroom of brick which matches the rest of the house. Appended to the south wing is a one-story flat-roofed addition which extends to the east and then to the north and contains several low-scale institutional components of masonry construction dating from the mid-1950s and thereafter.

The original portion of the residence is roofed with a composite hipped-gabled roof system clad in red barrel-form ceramic tile with corresponding tile coping and roof combs. The roof extends away from the plane of the house to form eaves which are supported by elongated consoles. A hipped-roof dormer on the facade has a pair of double-hung windows.

The rear of the Nowak House has irregular fenestration and incorporates two brick chimneys which rise above the roofline. A two-story centered bay window on this elevation is capped with a gable roof. A fire escape is appended to the sleeping porch on the north wing.

The interior of the Nowak House contains eighteen rooms. The first and second stories are arranged around a modified four-over-four plan, with a central hallway, a diningroom, and a kitchen on the south side, and a living­room on the north side which runs for the entire depth of the house. At the north end of the first story of the house is a sunroom on the first story, with a distinctive lancet-arched vaulted ceiling. The second story originally contained four bed­rooms and a library, and the third story included both living quarters for servants and a cedar-lined room for the storage of clothing. Many of the original hardwood floors are exposed and lavish oak woodwork and art glass window treatments are found throughout. The ceilings of the principal rooms are finished in ornamental plaster; the diningroom ceiling was originally finished in gold leaf, no longer extant.

The Nowak House is located on a flat lot in a generally residential neighborhood several blocks east of the central business district of the Village of Lancaster. The property originally included several greenhouses, spacious lawns and plantings, and a gardener’s house south of the main house, no longer extant. A tile-roofed automobile garage, built concomitant with the house, stands southwest of the main house and has been interconnected to the aforementioned single-story institutional additions. An asphalt-paved parking area lies between the house and Broadway. One non-contributing building is included within the property; this a free-standing low-scale modern brick institutional building, one story in height, located at the northeast corner of the property. Much of the grounds are enclosed in a chain-link fence. 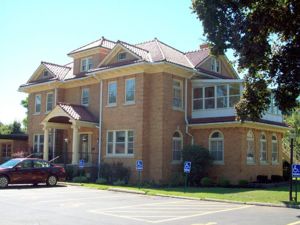 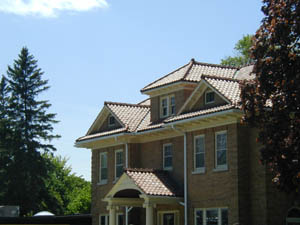 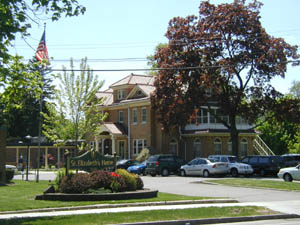