[send private message]
This page has been accessed 578 times.

The Zuidema-Idsardi House is a historic home located in the village of Lancaster in Erie County, New York. It is a locally significant and distinct example of the vernacular interpretation of Italianate style, incorporating elements of Eastlake Movement ornamentation. It was built for Gertrude Idsardi, stepdaughter of John H. Zuidema, in 1884. She lived in the house until 1920, after which the Barrows family lived in the house for many years. Mr. and Mrs. Dennis Szuniewicz lived there for many years after the Barrows. The house was listed on the National Register of Historic Places in 1999.

The Zuidema-Idsardi House is located at 5556 Broadway (originally 132 East Main Street), in the Village of Lancaster, Erie County, approximately twelve miles east of the City of Buffalo. The property is a two-story Italianate residence of wood frame construction with a T-shaped facade which incorporates some ornamental features of Eastlake-style derivation. The house is built upon a foundation of coursed rubble stone of more than one foot in thickness. The exterior is sheathed in weatherboard with the corners defined by modest cornerboards. The main section of the house is three bays in width and is oriented to the south, facing Broadway. Fenestration features flat-topped windows with one-over-one sash, set within frames capped with molded heads trimmed with scroll-sawn ornament. The main entrance to the house is offset at the right side of the facade, incorporating a double door with upper and lower recessed panels and central sections of glass. Extending across the facade and wrapping around a portion of the west side is a one-story wood porch with a shallow reverse-bellcast hipped roof, supported by Eastlake-style turned posts and further ornamented with sawn fan brackets. The porch is further ornamented by a simple upper balustrade and a lower balustrade with attenuated wood balusters into which have been inserted wood balls at graduated heights, giving the overall effect of a swag. On the west side of the house is a one-story bay window with bracketed trim and paneled bulkheads beneath the windows as well as a one-story side porch.

The rear elevation (north) of the house is devoid of any architectural ornament. Its only opening is a modern three-section window on the first story which opens into the kitchen of the house. This non-historic treatment, located on a tertiary elevation, does not detract significantly from the otherwise high integrity of the property.

The Zuidema-Idsardi House is roofed with a truncated multiple-hipped roof, clad in asphalt shingling. Metal cresting was removed from the flat surface of the truncated roof deck in 1930. Beneath the eaves, a fascia extends around the perimeter of the house, trimmed with paired Italianate-style sandwich brackets.

The interior of the house retains much of much of the property’s original floor plan and finishes, including a stair hall with a stairway ornamented with a hexagonal mahogany handrail and turned balustrade. Other significant features include wainscoting in the kitchen, original doors and window escutcheons, oak flooring, woodwork, and doors (including two sets of pocket doors), ornamental ceiling plasterwork, and faux marble slate mantels with tiled hearths.

The house is located on a flat lot in a traditionally residential neighborhood, which originally contained homes and churches, and which in recent years has seen some office and commercial development. A grass planting strip is immediately inside the curbline and is followed by a concrete sidewalk and a grassy front yard. A driveway leads northward from Broadway along the west property line and opens into a paved parking area behind the house. One historic outbuilding, a board-and-batten gable-roofed barn which dates from the same period as the house, is located at the rear of the house.

The Zuidema-Idsardi House is significant under National Register Criterion C for architecture, as an intact, locally-significant, and distinctive example of Italianate residential design incorporating elements of Eastlake ornamentation. The house is typical of the type of upper middle-class homes which were being built in this Village during the last quarter of the nineteenth century. Built in 1884, the Zuidema-Idsardi House is representative of the second historic context, “Socioeconomic Growth and Maturity of the Village of Lancas­ter 1850-1949,” as identified in the National Register of Historic Places Multiple Property Documentation Form, Historic and Architectural Resources of the Village of Lancaster, Erie County New York. The house retains both its period physical characteristics and high integrity of overall design and satisfies the registration requirements set forth in Section F of the MPDF for Property Type I, Residential Architecture. On July 29, 1993 the Keeper of the National Register determined the property eligible for the National Register under Executive Order 11593.

The Zuidema-Idsardi House incorporates characteristics of the Italianate style along with mass-produced lathe- and scroll saw-finished components of the “Eastlake” style of ornament, named for British interior designer/critic Charles Locke Eastlake (1833-1906). Italianate elements include the low-pitched hipped roof system, the tall, narrow fenestra­tion, and the brackets under the eaves. Eastlake ornament is evident in the turned posts, the upper and lower balustrade, and the beaded spindles of the veranda.[1]

This house was built on the former site of the Lewis family house, where, on November 6, 1864, Mrs. Betsey Lewis was shot by an intruder and died a few hours later.[2] In 1876 the property was purchased by John H. Zuidema, a local Dutch businessman.[3] Zuidema emigrated from Holland in 1849 along with a number of other Dutch businessman who settled in Lancaster with their families and contributed significantly to the community’s architectural and socioeconomic heritage. Zuidema initially settled on a farm in the rural reaches of the Town of Lancaster, where he lived until 1876, when he relocated into the village. The Beers 1880 Erie County Atlas shows his tract in the village including four acres along East Main Street (now Broadway). 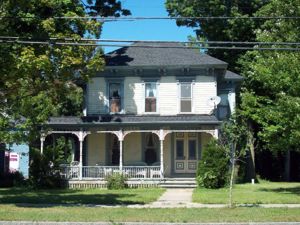 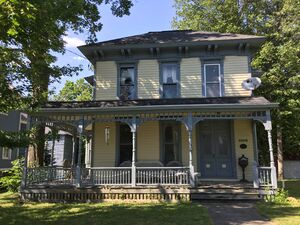 Deed for John Zuidema's purchase of land in the Village of Lancaster, 1876 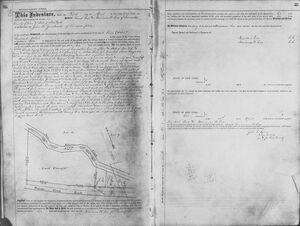