No Profile Manager [adopt this profile]
This page has been accessed 533 times.

Herman B. VanPeyma House is a historic home located at Lancaster in Erie County, New York. It a locally significant distinct example of the eclectic architecture featuring the Queen Anne style, built circa 1890. It was built for Herman Boetkhout VanPeyma, an early Dutch immigrant to the Town of Lancaster.

The Herman B. VanPeyma House is located at 5565 Broadway (Originally 131 East Main Street), in the Village of Lancaster, Erie County, which is approximately twelve miles east of Buffalo, in western New York State. The property is a two-and-one-half-story eclectic Stick/Queen Anne-style residence of wood construction, irregular in plan but basically rectilinear, and is located at the corner of Broadway and Burwell Avenue, east of the central business district of the Village. The VanPeyma House retains a high degree of architectural integrity.

The c. 1890 house is built upon a foundation of coursed ashlar sandstone. Exterior side walls are finished in clapboard, with Stick-style trim boards on various sections of the exterior surfaces. The house is oriented perpendicular to Broadway and is gable-roofed. The facade (west elevation) includes a broadly sweeping expanse of roof which extends beyond the plane of the house and shields an integral front porch. The main entrance to the house opens inward from the porch, which is articulated by modest round columns of wood and by a balustrade with attenuated turned balusters. The porch extends northward beyond the plane of the house, and is finished with a gable end oriented to the north, and ornamented with an oval oculus in the pediment, somewhat reminiscent of the Colonial Revival style. Also incorporated into the west elevation is a large gabled dormer with a shingled finish and paired windows on the second and third stories. On the east elevation is a three-story bay window which extends past the eave to form an octagonal tower at the attic level. Also on the exterior of this elevation is a brick chimney which rises above the roofline of the house. The south elevation incorporates a centered one-story gable-roofed section. The gable ends on the north and south sides contain windows in each pediment–a paired four-over-four window unit on the north side and a single four-over-four unit on the south side. Aside from the oculus mentioned above, all fenestration on the VanPeyma House is flat-topped, set singly and in groups, with multi-light sash, some with traditional wood storm windows and others with triple-track storm windows. Some windows have curved sash with art glass. The storm sash does not detract from the overall integrity of the property.

The interior of the house has been converted for multi-family occupancy. The original stair was removed during the process of conversion, but the interior does retain an overall integrity of design. Notable interior features include the overall spatial arrangement, as well as trim features including fireplaces, pocket doors and some early lighting fixtures (Photo 10), and rooms with plaster crown molding.

No historic outbuildings are associated with the VanPeyma House. The sole depend­ency is a gable-roofed, open-sided carport which is located immediately behind the house and is accessed from Burwell Avenue, along the east perimeter of the lot. The carport appears to date from outside the period of significance of the nominated resource and is therefore considered to be a non-contributing feature on the cultural landscape of the property. The 1923 Sanborn Fire Insurance Map for Lancaster depicts a one-and-one-half-story automobile garage at the southwest corner of the property; it is no longer extant. The VanPeyma House sits back from the roadway on the north and east sides and abuts other residential property on the south and west sides.

The Herman B. VanPeyma House is significant under National Register C for architec­ture, as a locally-significant, distinctive, and intact representative example of the eclectic design patterns of the nineteenth century in Lancaster, incorporating elements from the Queen Anne, Stick, and Colonial Revival styles of architecture. The house was built c. 1890 on the site of the Rev. Theodotus Burwell’s “Oakwood Institute,” an ill-fated and short-lived mid-nineteenth-century educational experiment. The house is associated with Historic Context II, “Socio-economic Growth and Maturity of the Village of Lancaster, 1850-1949,” as identified in the National Register of Historic Places Multiple Property Documentation Form, Historic and Architectural Resources of the Village of Lancaster, Erie County New York. The building satisfies the registration requirements set forth in Section F of the MPDF for Property Type I, Residential Architecture, and on July 29, 1993 was determined eligible for the National Register by the Keeper of the Register under Executive Order 11593.

The c. 1890 house was built for Herman Boetkhout VanPeyma (1854-1933), the son of Jacob W. and Jetske Klaasesz VanPeyma (originally “VanPeijma”), who were among the Dutch immigrants who came to Lancaster in 1849 and were locally known as “Hollanders.” The elder VanPeyma was a physician who practiced in Lancaster until 1885. Herman VanPeyma received his early education at the Lancaster Public Schools and graduated from the Buffalo High School in 1873. He taught for several years in district schools in the Town of Lancaster and also worked as a civil engineer for the Erie Railroad. He read law in the offices of Day and Rohmer and was admitted to the Bar in 1879, after which time he opened his own practice, becoming a prominent western New York State practitioner. Remaining a bachelor, Herman VanPeyma lived in this house until the time of his death in 1933. For several years prior to his death, his also-unmarried cousin, Neeltje Borgman, lived in the house with him, and his will left her "life use of his residence and his automobile."[1] Neeltje lived in the house until her death in 1937, after which the property was converted for multi-family use. Relatives on VanPeyma’s mother’s side, the Klaasesz family, owned the house into the 1990s. 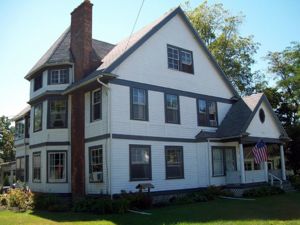