No Profile Manager [adopt this profile]
This page has been accessed 452 times.

John Richardson House is a historic home located at Lancaster in Erie County, New York. It is a locally significant and distinct example of the vernacular interpretation of Italianate style. It was built about 1840 by John Richardson, a local brickmaker and builder.

the home was owned by Miss Alice Simpson, and then by Joseph and Elaine Giallanza and Their son Michael.

The John Richardson House is located at 5653 Broadway in the Village of Lancaster, Erie County, approximately twelve miles east of Buffalo, in western New York. The building rests on a stone foundation, is Italianate vernacular in design, and is constructed of unpainted common-bond brick. The original character of the house was that of a story-and-one-half cottage, rectangular in form, with an integral one-story shed-roofed section at the rear. In 1868 a two-story addition was erected on the west side of the original portion of the property. All roof surfaces are clad in asphalt shingles.

The c. 1840 original wing is gable-roofed and is oriented on an east-west axis. In the center bay of this section a single door is set in a segmental-arched opening. Flanking this door are segmental-arched, shuttered windows, four-over-four lights. A small shed dormer of wood is centered on north slope of the roof of this wing, allowing light to penetrate into the upper half-story of this side of the building. The exposed eastern gable end of this wing is two bays in width, with a centered interior gable-end brick chimney. Each bay on this side has a segmental-arched four-over-four windows on the first story and a round-arched four-over-four window in the pediment of the gable end.

In 1868 a three-bay-by-three-bay gable-roofed wing was added to the west side of the house, oriented toward Broadway on a north-south axis. The main entry to this wing is offset on the west side of the facade, with double four-paneled doors and a two-light transom sash. Each door has a glazed upper panel and a recessed lower panel. Fenestration on this section includes segmental-arched openings on the first story and round-arched openings on the second and in the attic. The first story contains four-over-four French windows on the facade and conventional four-over-four windows on the west side. All windows openings have single-course brick voussoirs, rest upon stone sills, and retain operable louvered shutters. Two brick interior chimneys are on the west elevation.

A one-story porch of wood extends across much of the facade of the Richard¬son House. The porch is nearly flat-roofed, and is supported by modest round columns set on pedestals of wood with vertically-oriented recessed panels. The porch is further articulated by an open balustrade with turned balusters, which appear to be replacement elements.

Along a portion of the rear (south elevation) of the house is a one-story original wing of brick with a shed roof. Structural failure of this wing necessitated the recon¬struction of much of the south wall and a portion of the east wall; the reconstruction used salvage bricks of a dimension and color similar to the original materials. This wing has a single two-over-two segmental-arched window on the west elevation and a single door and segmental-arched window on the south elevation.

The interior of the Richardson House has been converted from its original single-family residential use to that of a combined residence-office. Nevertheless, it retains its basic plan and the integrity of its overall finishes. Among the notable features of the interior are the side hallway of the 1868 addition, which includes a hexagonal newel and handrail of walnut and a turned balustrade with painted finishes. Other distinguishing features include original woodwork and doors with painted finishes and faux marble slate fireplaces. The rear wing which was substantially recon¬structed was originally finished in beaded wood; a similar wall treatment was installed at the time of the reconstruction.

Associated with the house is one historic outbuilding, a one-and-one-half-story barn of wood, sided in clapboard and capped with a gable roof. Entry to the barn is gained by means of a sliding-track door on the west side. The gable ends are articulated with two-over-two windows trimmed with shutters and a six-light fixed-sash window is in the pediment of the gable.

The house is located near the eastern corporate boundary of the Village of Lancaster and fronts on Broadway (U. S. Route 20). A concrete sidewalk and picket fence run along both the north and the west side of the lot, along Ivy Way. Significant landscape features include the fence as well as mature shade trees, including several ornamental varieties. Landscaped lawns are along the north, east, and west portions of the property, while much of the rear of the lot has been asphalt-paved for parking.

The John Richardson House is significant under National Register Criterion C for architecture, as an intact, locally-significant, and distinctive example of the vernacular interpretation of Italianate-style residential design in this western New York State village. Built in three stages, beginning c. 1840, the property is associated with both historic contexts, “Settlement and Development of the Village of Lancaster 1807-1849" and “Socio¬economic Growth and Maturity of the Village of Lancaster, 1850-1949,” as identified in the National Register of Historic Places Multiple Property Documentation Form, Historic and Architectural Resources of the Village of Lancaster, Erie County New York. The house and its dependency retain both their period-specific physical characteristics and a high degree of architectural integrity. The Richardson House satisfies the registration requirements set forth in Section F of the MPDF for Property Type I, Residential Architecture, and on July 29, 1993 was determined eligible for the National Register by the Keeper of the Register under Executive Order 11593.

The house was built by John Richardson, a local brickmaker and builder whose five-acre brickyard stood behind his home to the south. The site of the brickyard was subdi¬vided for a mid-twentieth-century residential neighborhood. In addition to manufacturing brick, Richardson also was a builder, and erected many of the early brick homes within the Village. He also built and owned the Richardson Block, a commercial building on Main Street in downtown Lancaster. Many of the nineteenth-century brick residences and commercial buildings in Lancaster are said to have come from Richardson’s manufactory. He lived in this house until his death in 1878. He left the house to his daughter, Catherine M. Richardson Dykstra, who retained ownership until 1897. 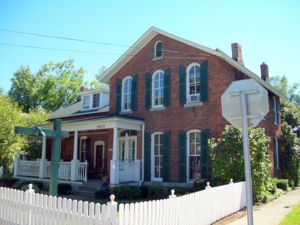