[send private message]
This page has been accessed 574 times.

This is the home page for the town of Budleigh Salterton on the East coast of Devonshire County in England. It is not a large town, but it has an interesting history and geography, The town is part of the Internationally Famous Coastal Protected area now called The Jurassic Coast. Budleigh Salterton is the home to around 6600 permanent residents.

The town is also at the mouth of the river Otter which runs from Ottery St Mary to the Coast. The Mouth is a marshy area which is the home of various migratory birds and waterfowl.

The parish of Otterton covers most of the east side of the Otter river. The west side is covered by several parishes including East Budleigh (which covers the town of Budlieigh Salterton and the village of East Budleigh) as well the parishes of Bicton, Colaton Raleigh, Aylesbury and Ottery St. Mary. But I digress.

One Notable historical resident of Budleigh Salterton was Raleigh-1 - Sir Walter Raleigh - and his family in the 16th century. Like his brothers, Sir Walter was an explorer and a sailor and he founded what is now called the Lost colony of Roanake in America. Sir Walter Raleigh also had Gilbert Half brothers through the previous marriage of his mother. These include Gilbert-3620 - Sir Humphrey Gilbert. They too would have been raised in this town area.

More information on the Raleigh and Gilbert families can be found on the following blog - including some interesting family trees that show the connection between the Gilbert and Raleigh families - https://raleighandhisfriends.wordpress.com/

The parishes of Colaton Raleigh and Widycombe Raleigh were named after the Raleigh family.

The Genuki Page for East Budleigh has links to various parish records for BMD's. -- http://www.genuki.org.uk/big/eng/DEV/EastBudleigh -- You will need to scroll down to section marked Church Records. Baptism and Burial records date from the 1550s down to 1812. The Marriage records run from the 1550's to 1754.

I have access to other Marriages in East Budleigh from 1754 to 1837 in booklet form if you wish for me to do a look-up. All records from 1837 to the present time should now be accessible from online. 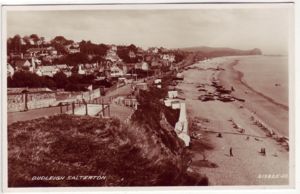