[send private message]
This page has been accessed 592 times.

Much of the following information was taken from the Shetland Bus Friendship Society booklet:

On the night of 8/9 April 1940 Germany launched an unprovoked attack on Norway. With its long history of neutrality, Norway was ill prepared mentally or physically to resist the invasion. On the 7th of June King Haakon and his government decided that further resistance in Norway was not possible and moved to Britain to continue the fight from there.

Even before organized resistance in Norway came to an end, the first of some 300 small craft sailed for freedom. Most of them landed in Shetland but some boats ended up on the Faroes, Orkney, or mainland Scotland and few even reached Iceland and England. A warm welcome awaited those who landed in Shetland.

The powers that be soon realized that if small boats could sail from Norway, some of the same boats manned by brave and determined men could return to Norway on clandestine operations. Thus began the Shetland Bus. Two enemies existed, the weather & the Germans, with the weather often proving to be the most dangerous.

Because of its isolated location, Lunna was chosen as the base for these secret operations while Flemington (now called Kergord) was headquarters for agents to an from Norway. Because Lunna lacked boat repair facilities and proved very lonely for the Bus men, it was decided to move to Scalloway. This was close to Moore's boatyard for repairs, Norway House for accommodation, and Dinapore for local headquarter outweighed this being the "wrong" side of Shetland. The Bus men enjoyed being part of a community which took them to its heart without ever compromising the safety of their mission.

Of almost 100 trips from Lunna and Scalloway the fishing boats carried into Norway agents, wireless operators and military supplies for the resistance —and, in season, Christmas trees for an almost treeless Shetland.

By April 1943 winter storms and increasing German surveillance counted for the loss of 10 boats and 44 men. Although the surviving crewmen were willing to continue the powers that be decided to stand down unless bigger, faster and better armed boats could be found.

Their prayers were answered with a gift of 3 American sub-chasers called the HITRA, HESSA and VIGRA. These 3 ships made 115 round trips to Norway. Only 300 Norwegians were involved in the Bus Boat. Ashore the Shetlanders and British servicemen worked hard to support the Norwegians though they themselves were expressly forbidden to take part in sea operations for fear of blowing their cover.

The importance of the Shetland Bus to the war effort was out of all proportion to the numbers involved. It gave a tremendous psychological boost to the people of occupied Norway. In 1942 Crown Prince Olav visited Scalloway and gave permission for his name to be given to the slipway they had built for their boats.

The Shetland Bus Memorial is made of stones from Shetland and from Norway. The Shetland stones came from Scalloway, Lunna , Kergord, Lerwick and Catfirth. The Norwegian stones were lovingly gathered from the home area of each of the 44 men who made the supreme sacrifice.

The Shetland Bus had captured the public imagination on both sides of the North Sea and celebrated in newspapers, magazines, books, films and exhibitions. The Bus men were part of of the Scalloway community for 3 long years.

The goal of this project is to ...

Right now this project just has one member, me. I am E. Lauraine Syrnick. 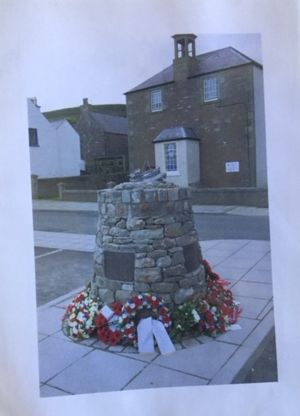 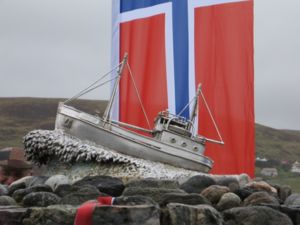 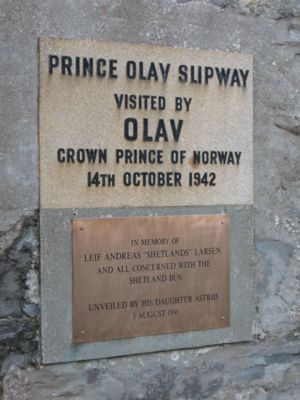 E. Lauraine (Smith) Syrnick
i learned about this from my cousin who still lives in Scalloway as Willie Smith. I did not hear about the Bus Boat people until we met on-line. Since then have visited Shetland with my daughter in 2016. We actually attended a memorial service at the Bus Boat Memorial where some people from from Norway attended. Have no additional information but the memorial was worthwhile and a great memory of those who died or perhaps still lived from that time. My cousin helped to get the Memorial going in Scalloway, Shetland and was nvolved so naturally told me about it. Did read the book written about it. Oh yes, have some more pictures of the people from Norway that attended if you are interested? Should I post them here?

I look through new projects regularly to help connect them with larger upper level Projects: http://www.wikitree.com/wiki/Projects .

Can you add some more detail to your project page here? Then we can see if there are others out there who would like to collaborate with you in building it up. Thanks!