[send private message]
This page has been accessed 273 times.

Sir William Cavendish (Cavendish-8) and Elizabeth (Bess of Hardwick) (Hardwick-21) purchased the estate in 1549 with money made in the service of Henry VIII. The park covers 400 hectares. George Talbot, 6th Earl of Shrewsbury (c1528-90; Bess' fourth husband) was appointed by Queen Elizabeth I as custodian of Mary, Queen of Scots, who was a prisoner at Chatsworth at various times between 1569 and 1584


The 3rd Earl of Devonshire (Cavendish-80) supported King Charles 1 in the English Civil War and narrowly avoided losing Chatsworth to Parliament. The 4th Earl / 1st Dike (Cavendish-79) rebuilt Chatsworth over 20 years as a Baroque palace (He was awarded the Dukedom in 1694.)


The 4th Duke (Cavendish-20) hired 'Capability' Brown (1716-83) to improve the landscape and James Paine (1717-89) to build the bridges, water mill and stables. In the 1760s Edensor village was moved to its present location and the 6th Duke and Joseph Paxton rebuilt it combining a variety of architectural styles. The 6th Duke (Cavendish-156) modernised Chatsworth, built a new wing and his head gardener (appointed at the age of 23), Joseph Paxton (1803-65), re-designed and enlarged the garden over 30 years. In 1829 the 'Dwarf Cavendish' banana was imported and thrived at Chatsworth becoming the commercial banana grown around the world. Paxton built the Emperor Fountain, Rockery and Great Conservatory and went on to build the Crystal Palace in London as the site for the Great Exhibition in 1851. 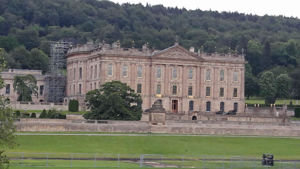