[send private message]
This page has been accessed 291 times.

Cindy's Diner is one of the remaining Valentine Diners which were designed by Arthur Valentine[1] in Wichita, Kansas after the Great Depression.[2] The Valentine Diners were a portable restaurant that could be operated by one or two people. They were shipped all over the country.

The original owner of Cindy's Diner was Noah Clauss who purchased "Noah's Ark," for $6,000 in 1952. It was located at the northwest corner of Clinton and Jefferson Streets.

In 1990 John and Cindy Scheele purchased the diner at auction, restored it and moved it to 830 S, Harrison Street. It reopened October 1 as Cindy's Diner.

In 1997 the original Murphy's Dime Store Donut Machine was added to the diner.

In 2016, Angie Harter, longtime employee, purchased Cindy's Diner. The restaurant's motto remains "We can serve the whole world, 15 at a time." 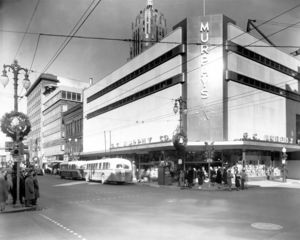