[send private message]
This page has been accessed 849 times.

The focus of this team's work is to identify, improve and maintain profiles associated with the Lairds and Chiefs of Clan Ogilvy together with members bearing the name Ogilvy, the related families and those recognised as septs of Clan Ogilvy.

Clan Chief - The Rt. Hon. The Earl of Airlie

Auchindoun Castle was acquired by the Ogilvys in 1489.

Airlie Castle, Airlie, Angus was home of the Ogilvy Earls of Airlie

Origins of the clan Ogilvie

The Ogilvy family clan are an ancient part of the Scottish history books. The first recorded mention of their name is in the year of 1177, Gillebride; First Earl of Angus gave the lands of Angus to his son Gilbert. The Ogilvy name is said to originate from the old Pictish language which was used in Scotland . ‘ Ocel Fa' meaning; ‘High ground' is how it would have been spelt then.

In the year 685A.D. this land was the realm of the Picts who were a fierce war like nation. They fought with the English invaders from Northumbria and defeated them at a place called Nechtansmere, once and for all stemming the advances into their territory.

The Ogilvys are one of the most distinguished families in Scotland and take their name from Gillibride the second son of Gilliechriost, Earl of Angus. The name Ogilvy or Ogilvie derives from Gilbert one of the descendants of the ancient Earls of Angus. The name is also believed to be derived from the Old British word Ocelfa meaning high plain.

Patrick de Olgilvy appears on the Ragman Roll swearing fealty to King Edward I of England in 1296.

The lands of Ogilvy are in Angus and the name is derived from Ocel-fa which is old British for high plain. In Pictish times Angus was ruled by a mormaer who was one of the ancient celtic nobles of Scotland who became the first earls. The Mormaer of Angus title became Earl of Angus and Gillebride, Earl of Angus gave the Ogilvy lands to his son, Gilbert, before 1177. Wars of Scottish Independence

Patrick de Ogilvy swore fealty to Edward I of England and appears on the Ragman Rolls of 1296. 14th and 15th centuries

In the 14th and 15th centuries the Ogilvys became hereditary sheriffs of Angus. A son of Sir Walter Ogilvy of Auchterhouse was killed in a clan battle with the Clan Robertson in 1394 and Ogilvys also fought at the Battle of Harlaw in 1411. Sir Patrick Ogilvy commanded the Scottish forces that fought alongside Joan of Arc against the English, and he was styled Viscomte d'Angus.

In 1425 Sir Walter Ogilvy, younger son of Ogilvy of Wester Powrie, was appointed High Treasurer of Scotland. He was also an ambassador to England in 1430 and four years later he attended Princess Margaret on her marriage to the Dauphin, heir to the throne of France.Sir Walter had numerous sons, including another Walter who became the ancestor of the Earls of Seafield and Deskford. His eldest son was Sir John Ogilvy of Lintrathern who received a charter for Airlie Castle and its lands in 1459. In 1491 Sir John's son, Sir James Ogilvy of Airlie was appointed ambassador to Denmark.[2] In the same year he was also advanced to the ranks of the peerage as Lord Ogilvy of Airlie.

The Clan Ogilvy, supported by men from the Clan Oliphant, Clan Seton, Clan Gordon and the Clan Forbes fought at the Battle of Arbroath on 24 January 1445 against the Master of Crawford and his Clan Lindsay. 16th century and the Anglo-Scottish wars

In 1639 the seventh Lord Ogilvy was created Earl of Airlie. However the Ogilvy family suffered in their service to the Stuart monarchs. The earl and his sons joined James Graham, 1st Marquis of Montrose to oppose enemies of Charles I of England. The earl fought with distinction at the Battle of Kilsyth where Montrose was victorious. Sir Thomas Ogilvy, the earls second son raised his own regiment to fight for the royalists but he was killed at the Battle of Inverlochy (1645), which was another victory for Montrose. The earl's eldest son, Lord Ogilvy fought at the Battle of Philiphaugh in February 1645 where Montrose was taken by surprise by a strong force of Covenanter cavalry under General David Leslie, Lord Newark. Montrose escaped but Ogilvy was captured. Ogilvy awaited execution in St Andrews Castle however when his sister visited she exchanged clothes with him and he passed unnoticed by the guards. Ogilvy lived to see the Restoration. 18th century and the Jacobite risings

The Clan Ogilvy supported the Stuart cause and joined the Earl of Mar in the Jacobite rising of 1715. Lord Ogilvy was attained but was allowed to return home in 1725, although his titles were not restored.[2] When he died in 1730 his younger brother, John Ogilvy, assumed the style Earl of Airlie. During the Jacobite rising of 1745 his son, David Ogilvy, raised a regiment that was composed mostly of Ogilvys to fight for theYoung Pretender. In 1746 the regiment fought at the Battle of Culloden. After the defeat at Culloden Ogilvy escaped to France. There he entered royal service and obtained the rank of general. The earldom of Airlie was not restored until an Act of Parliament in 1896 when it was confirmed to David Ogilvy, sixth earl.

However the Ogilvy Earl of Seafield had in fact supported the Acts of Union 1707. The clan today

David Ogilvy, 13th Earl of Airlie is the present chief of the Ogilvie clan and served as Lord Chamberlain to the Queen. Royal links were also reinforced when Angus Ogilvy, the brother of the chief, married HRH Princess Alexandra of Kent. There are many people of the Ogilvy/Ogilvie family living in various places all over the world, such as Australia, Norway, United States, Canada, and New Zealand. Castles

Auchindoun Castle was acquired by the Ogilvys in 1489. Airlie Castle, Airlie, Angus was home of the Ogilvy Earls of Airlie. Cortachy Castle. Banff Castle. 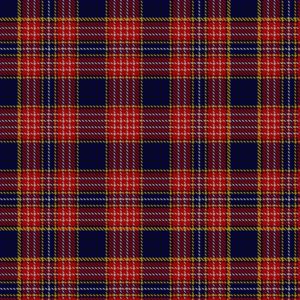