[send private message]
This page has been accessed 1,288 times.

Various Names of the House

OVERLOOKING from its eminence one of the bends of our beautiful river at Oxley, in the year 1889, Mr. William Montgomery Davenport Davidson then, or soon after, Surveyor-General of Queensland, built Cliveden, the name being that of his old family home and birthplace, Cliveden, at Richmond, on the River Thames, in the old Homeland—Richmond, with its beautiful residences, its park, and its fair riverside scenery. This latter we have at Oxley, in our southern land, also park-like spaces and beautiful homes.

After passing through the college of civil engineers in London, where he gained his diploma, Mr. Davidson left England for Tasmania, in 1852 and in the same year went over to Victoria. But he returned to Tasmania in 1854, and was appointed inspector surveyor for the southern part of the island. In 1861, at the invitation of Mr. (afterwards Sir) A. C. Gregory, the well-known explorer and surveyor —whose home, Mornington, on the terrace, which bears his name, was described within recent months—Mr. Davidson came to Queensland, and was appointed staff surveyor. In 1875 he became district surveyor, and later he accepted the position of Deputy Surveyor-General, and on the resignation of Mr. Tully in 1889 he became Surveyor-General.

The "Courier" of November 14 last, in giving an account of old Oxley and Corinda, says that Mr. Davidson purchased the five acres of land on which he built Cliveden from the wife of the first schoolmaster at Oxley, the late Mr. William Fowles, the father of Dr. E. W. H. Fowles. It was the summit of the high part of this land. Mrs. Fowles had 17 acres that Mr. Davidson purchased, and it was ideal, with its river and distant views, as a home site.

Cliveden-avenue is but a country road, so adds to the rural aspect of the scene as it runs below the grounds in front. There the sloping land beyond this road rises, so that above the river bend to the right it has reached a considerable height. Over the river on the left, through the trees by Cliveden-avenue, we get peeps of scattered homes, and then comes Mt. Cootha against the skyline.

THE Davidsons were already residents of Oxley before Mr. Davidson purchased the land on which he built Cliveden, he having in about 1877 built a smaller home on the other side of the railway line. Mrs. Davidson was a Miss Hull, and was an accomplished musician. Major-General Spencer-Browne, in mentioning her in his book, "A Journalist's Memories," says that she sang with infinite charm, and was a very sweet woman. In fact, the family in general—it was a good old-fashioned one of ten, five sons and five daughters—was musical. So it is easy to understand that Cliveden held attractions for not only the musical, but for friends and acquaintances in general.

The orthodox—for the period—large room in the house, with its dividing set of folding doors, was used as the ballroom. It occupies the whole length of the front of the house, which is built of wood, as the main entrance is at the end of the veranda on the southern side. This leads into a hall divided by one archway, in which is a unique construction—a pair of cedar doors with Gothic arched tops and panels on each side of them formed of narrow glass cases for holding books or china. On the left, after passing through this doorway, one enters a triangular-shaped vestibule—a room on the right helps to shape it—with several windows, into which creepers are peeping—a very pleasant place. Across the larger part of this vestibule are the kitchen premises, and there is an upper story to this wing. So, with the six or seven rooms in the upper part of the main house, it is a very roomy building. The veranda and balcony extends round it on three sides.

MR. DAVIDSON died here in 1909 at the same hour—allowing for the difference in time—as King Edward VII. After his death Mr. Henderson, the Government Analyst, bought the property, and he sold it to Mr. W. R. Black, who presented it to the Presbyterian Church about six years ago, and it is now known as the Blackheath Home for Children.

It is in charge of a capable matron and her husband, and there are over 40 children —boys—being cared for there at the present time, the youngest being three little lads of four years old. The rest are boys of school age. They say that "a man is known by his friends." One may also judge a man by the way a little child will confidently slip its hand into his. A similar happening did not escape my notice on the day I visited Blackheath, and the genial countenance of the matron speaks well for her nature.

So, through the generosity of Mr. Black, the Presbyterian Church has provided a comfortable and most delightfully-situated home for these boys. It has not altered the house beyond building a fibro-cement addition to the original arched porch above the main set of steps, a wall in place of the folding doors across the middle of the large room previously mentioned, and glassed in a corner of the veranda for sleeping out.

THERE are many beautiful trees in the grounds of Cliveden, those in the outer parts of the property being dear old gum trees. Those in the vicinity of the house are planted trees of many different varieties, and the garden is terraced, as perhaps was that also in the older Cliveden by the River Thames in the older land over the seas.

On the property being sold after the death of Mr. Davidson his widow went to live at Mt. Tamborine, where she died a few years ago. One of the five Davidson daughters married Dr. Wilton Love, as stated in my article on old Bulimba House, the doctor's present home, which became one of the early links in this chain of historic homes, so many of which have mutual associations. Mrs. Love died some years ago. The other daughters are Mrs. Alan Spowers, wife of the present Surveyor-General, Mrs. Colquhoun, and the two Misses Davidson. One of the sons is Dr. Guilford Davidson, of Sandgate, and another, Mr. Leslie Davidson, is a solicitor. No doubt they are all pleased that the home of their young days, with its bright and happy associations, is being used for its present purpose, a home for children.

Houses have hearts that pulse at night
Against the tight-closed doors,
And beat in rhythmic tempo
On window sills and floors.
Just listen when you lie awake,
And children calmly sleep.
And you will hear that hidden heart
Spell home in rhythmic beat.[2]

"Mr. William Fowles was the first school teacher at Oxley appointed by the Board of Education in 1863 with a salary of 60 a year. Mrs. Fowles during his five years of office at Oxley saved enough from the sale of eggs to buy 17 acres of land close to Oxley Station. This she called 'Egg Farm' and eventually sold five acres on the summit to the hill to the Surveyor-General (Mr. Davidson) who passed it on to the Government Analyst (Mr. J.B. Henderson) who in turn sold it to Mr. W.M. Black. Mr. Black presented the property to the Presbyterian Church and it today constitutes the [Space:Cliveden_House|Blackheath Home]]." [1931][3]

"BLACK, WILLIAM ROBERT (1859-1930), mine-owner and philanthropist, was born on 3 March 1859 at Kildress, County Tyrone, Northern Ireland, son of Robert Black, farmer, and his wife Margaret, née McNeece. He arrived in Queensland [on board the ship the] Silver Light, worked around Maryborough as a farm-labourer, timber-cutter and fencer, then moved to Brisbane and delivered coal with a hand-cart for a merchant named Lindsay. By 1885 he was in business for himself, delivering coal with a horse and dray. He extended his interests to coal-transport on the Brisbane and Bremer rivers, and soon controlled a fleet of six launches and twenty lighters.

"Continuing good fortune and increasing wealth enabled Black to buy 700 acres (283 ha) of coal-deposits at Bundamba near Ipswich. There he established the Blackheath Colliery and with electric haulage and advanced machinery was soon able to cut 600 tons (tonnes) a day — a State record. When he later bought the Caledonian Colliery at Walloon, he raised its output to 300 tons (tonnes) daily. His purchase of the Abermain Colliery at North Ipswich cost him an additional £8000 for a railway-siding and £40,000 for a new shaft and machinery.

"Black retired from business in 1920. For some years he had been busily dispersing his fortune. Small, dark, reserved and a devout Presbyterian anxious to maintain the link between religion and education, he gave mainly to church institutions. He saw his wealth as a trust and believed that 'much had been given that by him much might be done'; all gifts were carefully considered and were usually conditional on others agreeing to make donations. In 1917 he helped to establish Fairholme, the Presbyterian girls' school at Toowoomba, and in 1919 Scots College for boys at Warwick. From 1918 he served on the councils of both the Brisbane Boys' College and Somerville House for girls, a united educational venture by the Presbyterian and Methodist churches. He also assisted in founding Emmanuel College, University of Queensland. Black's donations to the Presbyterian Church in 1919-20 enabled it to employ both a director and a kindergarten and primary supervisor of Sunday schools. Further gifts led to establishment of the Blackheath Home for Children at Oxley in 1923, a children's home at Chelmer in 1927 and old people's homes in both suburbs in 1929. Many other smaller donations to individual congregations enabled the Presbyterian Church in Queensland to expand.

"Black died of coronary thrombosis on 2 October 1930 at St Martin's Hospital, Brisbane. He had never married and, after various bequests to relations in the Channel Islands, the residue of an estate valued for probate at nearly £180,000 was left in trust for the Presbyterian Church in Queensland. His black-marble tombstone, erected by the Church in Toowong cemetery, bears only the red hand of Ulster, a cross and two inscriptions: 'Not slothful in business, fervent in spirit, serving the Lord' and 'The righteous showeth mercy and giveth'.

It was used as Industrial School before hand then renamed Blackheath for Boys.

"The home was commandeered by Military WW2 for the Anti-Aircraft Training School Air Defense as were other building's during this time.

"This painting was given to me [Robert Toreaux] with permission of John Buckby one of the boys who was in the home 1948. As well as myself Robert Toreaux and two brothers (in 1957/58) Ken Toreaux, Chris Toreaux, we went to Corinda State School at that time whilst there. The school has since been demolished many years ago now and is a housing development on the grounds in Cliveden Avenue Oxley.[4]

Robert Toreaux said that "the home was located at 175 Cliveden Avenue ,Oxley. You can still find this spot today as there are 5 Mango Trees all lined up [which] are heritage listed.[5]

It's use as an institution

Blackheath Home, in Oxley opened in 1924 and was operated by the Presbyterian Church. It was situated on the former site of St Agnes Babies Home. Originally a boys' home, some time after 1955 it began to accommodate children of both sexes. It was closed 9 May 1963. At this time, children were transferred to W. R. Black Home.

It's use during World War II

Various websites have reported that Blackheath Home was commandeered by the Australian defence forces during World War II and used for used as an Anti-aircraft Training School, and Air Defence with one website reporting that AWAS manned searchlights at the home during WWII.[7] 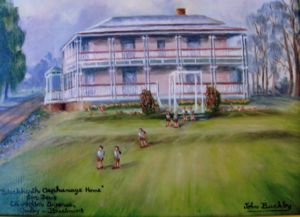 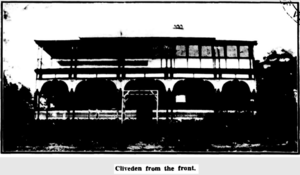