[send private message]
This page has been accessed 523 times.

At first it was intended to call this county, Pierce county. This changed after James Coryell died.[2]

1825 - The area that became Coryell County was part of Milam Land District, assigned for settlers by Mexican government to Robert Leftwich[3]

The county seat is Gatesville. The county is named for James Coryell, a frontiersman and Texas Ranger who was killed by Comanche Indians while protecting settlers.[1]

1825 - The area that became Coryell County was part of Milam Land District, assigned for settlers by Mexican government to Robert Leftwich[3]

1840s line of frontier forts was moved farther west, Settlements began
1852 -Fort Gates was abandoned . Settlers in the Fort Gates area numbered about 250 at that time, and they began to campaign for a county seat. [3]
1854 {{Blue|the legislature established Coryell County from Milam Districtand named it in honor of frontiersman James Coryell, an early landholder. Residents chose the site for Gatesville, the county seat, in an election held in May 1854. This eased the minds or the 250 settlers already there. [3][4]
1860 census showed population was 2,360; (81 of this number were slaveholders, who owned a total of 306 slaves). The majority of residents were from the Old South. Of the heads of households in 1860, the largest number (115) were from Tennessee, forty were from Alabama, and thirty-seven each from Kentucky and North Carolina. [3]

Unlike neighboring McLennan County, Coryell County had few large plantations. Most of its resources were devoted to stock raising and subsistence farming. [3]

1860 showed 25,000 cattle, 8,500 hogs, 3,800 sheep, 61,000 bushels of corn, 18,000 bushels of wheat, and forty-nine bales of cotton. [3]
1860-61 Although Coryell County residents owned relatively few slaves, sentiment was decidedly in favor of secession. Residents held several mass meetings advocating secession and the formation of militia companies. James M. Norris represented the county at the Secession Convention. [3]
Jan1861 Secession Convention voted to leave the Union; Coryell County voters approved the ordinance later that year by a margin of 293 to 55. Several companies from volunteered for duty in the Confederate Army or to help protect frontier settlers from Indians. [3]
1862-85 Gatesville- headquarters of the Second Frontier District, commanded by Maj. George B. Erath. [3]
1866-69 Reconstruction Local sources give little record of Coryell County during Reconstruction.
1869 - Election returns for 1869 showed the county choosing Andrew J. Hamilton over Edmund J. Davis for governor by a unanimous vote, 259 to 0; the vote indicated that the Radical Republicans had been banished by that time and the Democrats restored to power. [3]

In national politics, Coryell County was staunchly Democratic from the end of Reconstruction through the late 1960s. However, voters chose Richard Nixon in 1972, Ronald Reagan in 1980 and 1984, and George Bush in 1988 and 1992. Occasional third parties, such as the Greenbackers, Populists, and Progressives, drew a sizable portion of the vote, but never enough to swing the county's overall election results. Residents generally voted Democratic in state elections. [3]

pre-Civil War, schools in Coryell County were operated as private or subscription institutions, with state funds supplementing the budgets.
1864- 1866 the county lost 63% of its tax base. (1/3 of that was slaves) the other was decline in farm value, acreage and livestock. rest came from declines in farm acreage, farm value.

Recovery was slow because transportation was poor and the economy was so dependent on stock raising and farming. [3]

1872 legislature enacted a system of public schools. Coryell County had 20 teachers and 19 schools for nearly 600 schoolchildren. Nearly every community either had its own school or was near a community that did. Children also helped out on the family farm in 1870's. [3]

Chisholm trail passed through county, Copperas Cove was camp grounds for trail drivers.
1882 Two railroads were completed,the Texas and St. Louis Railway laid a narrow-gauge track from Waco to Gatesville, and the Gulf, Colorado and Santa Fe crossed the southern tip near Copperas Cove. The arrival of the railroads prompted the establishment of Oglesby, Lime City, and Leon Junction, and provided new economic opportunities for Mound, Gatesville, and Copperas Cove. A third railroad company, the Stephenville North and South Texas, laid track from Hamilton to Gatesville in 1911, providing the northwestern part of the county with easier access to rail service and making the communities of Ireland and Levita more important commercial centers.[3]
1880-1890, New immigrants arrived from Germany in the 1880s and 1890s via Galveston, Lee, and Fayette counties, and from Mexico soon after the turn of the century. [3]
1900, due to new residents from the Old South, farming was dominant occupation; cotton, corn, and oats were raised on more than 65% of 200,000 improved acres, population:21,308.[3]

1930, 145 residents of Coryell County were native Germans, and 352 were native Mexicans. Some former slaves left the county after the Civil War, but most stayed either to work for their former owners as sharecroppers or to start new lives on their own. The Great Depression and US government persuaded farmers to devote more of their resources to feed crops and livestock.
1930's Large-scale consolidation of common schools into independent school districts took place. [3]
1930's Civilian Conservation Corps established 2 camps established by the Civilian Conservation Corps-Mother Neff State Park to construct park buildings and tourist facilities, and one at Gatesville as a soil-conservation and brush-control detail.[3]

(1) Camp Hood occupied 225 sq. mi. of south Coryell county. This gradually eliminated 24 communities and1,200 farms.. Thus the economic focus of the county changed from farming to employment in government positions. By 1950 28% of the county farms were managed by tenants and fell to 12% in 1980. Sheep and goat ranching increased in 1940's but shifted to the cattle industry [3]
(2) Bluebonnet Ordnance plant.
(3) Camp for German prisoners of war. Due to large number of soldiers, construction workers, and other government employees who came to the area during the war years, there was a severe housing shortage, and many local families offered rooms for rent in their homes. [3]

1972 The St. Louis Southwestern of Texas abandoned its track to Gatesville.[3]
1970s,1980s, Gatesville was chosen as the site for several new units of the Texas Department of Corrections (see PRISON SYSTEM). The Gatesville State School for Boys, established in 1887, closed in the early 1970s, and the facility became the Gatesville Unit of TDC. Mountain View School for Boys, established in 1962, was also transferred to TDC in 1975 to provide relief for overcrowded conditions at the Goree Unit Women's Prison in Huntsville. The Hilltop Unit, a minimum-security prison for men, opened in 1981. [3]
1990s, the county had 100 churches, for 15 faiths; Southern Baptist, Methodist, Church of Christ were the largest.

3rd courthouse, 1897 (Photo courtesy Jim and Lou Kinsey, 2003). It is Style - Beaux-Arts Material - Limestone and sandstone. Style of Courthouse is Italian Renaissance Revival style building completed in 1898. Erected in 1897 on land donated by early settler R. G. Grant. Architect for this third Coryell Courthouse was W. C. Dodson; builder, Tom Lovell. Limestone and red sandstone blocks were precut to the exact size at quarry, then hauled here by horse-drawn wagons. At each entrance are columns in Roman Corinthian style; and over the east entrance is builder's mark of an owl. Statues on the roof represent "Justice." Noted trials have been held in this building.

Coryell County (/ˈkɔːrjɛl/ cor-yell) is located on the Edwards Plateau in the U.S. state of Texas. The Karst topography has contributed to underground caverns.

Prisons:
Of the eight Texas Department of Criminal Justice general correctional facilities for women, which include five prisons and 3 state jails, 5 of units, including 4 prisons and one state jail, are in the City of Gatesville.

Early Churches in County -- Early years there were itinerant ministers serving the areas stayed 2-3 months in a town. Earlieast churches were Baptist church, 1854, and Methodist Church in 1858. Christian Church was present mid-1860, Presbyterian church at Rainey's Creek, 1858, Lutheran church named St John's in Coryell Citiiy brought by Germans. Corey had no Catholic church until 1940 (prior to this Catholics had to travel to Waco or Lampasas. [5] Highways

Politics
Voters of Coryell County supported Democrat James Buchanan in 1856, and John Bell of the Constitutional Union Party in 1860. In 1872, the first year after Reconstruction that county voters could participate in national elections, Democrat Horace Greeley carried the county, and thereafter the county gave majorities to the Democratic candidates in every presidential election from 1876 through 1964. The county’s political loyalties began to shift, however, in 1968, when Democrat Hubert Humphrey won only a plurality of the area’s votes, and in 1972, when Republican Richard Nixon took the county with an overwhelming majority. Thereafter the Republican presidential candidates carried the county with decisive majorities in almost every election for Republican from 1976 through 2004. The only exception occurred in 1992, when Republican George H.W. Bush won only a plurality of the county’s votes, partly because that year independent candidate Ross Perot won many votes that might otherwise have gone to the Republicans. https://tshaonline.org/handbook/online/articles/hcc23 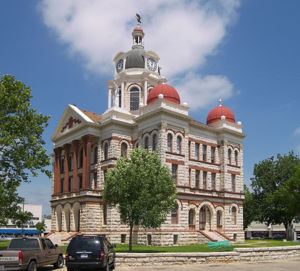