Crains Island was lost to the Mississippi River, but it once hosted a population of nearly 1000 residents.

Prior to the Illinois settlements in the early 1800's, the island was still French territory and it was named, "Mary's River Island." Mary's island is one of several islands in a group; the other two are Liberty island and Sheep island. In the early 1800s, the total land area of the islands was about two thousand acres, with Mary's river island being about one thousand acres.

John Crain was the first European settler to live there and it was named, Crain's island until the island was washed away.

John Mansker was the first European settler to build a log cabin on what is now Liberty Island[1], and at that time it was known as Mansker Island. The New Madrid earthquake of 1811-1812[2] shook the area strongly, changing the course of the river, and in 1812 John Mansker moved his family to the site of where he and his son, Samuel Mansker, built their home. After the earthquakes stopped, other settlers again moved to Liberty Island.

Throughout the 1800s, much of Crain's island was cultivated, as the ground was exceptionally fertile from constant flooding.

According to some sources, Liberty Island was the first of a series of islands nearest the Mary's river outlet, which included Crains Island and Sheep island, as seen in the image above.

However, other sources state that Liberty island is a located a little further south, as seen in the above image. Modern day maps agree that Liberty Island is located south of where Crains Island used to exist.

Both Crains island and Liberty island supported significant populations of people in the 1800s. Liberty Island is a level area of about seven hundred acres, which in 1880, had a population of 988 persons. Today, Liberty Island is covered entirely in trees and all of Crains Island and Sheep island have been washed away.

Maps, today, name a section of land on the Missouri side of the Mississippi river as "Crains Island" but most of that area used to be river bottom and does not represent the actual land our ancestors called Crains Island. The variations of stories is undoubtedly due to the constantly changing topography of the Mississippi river, and the different understandings of persons who wrote the history.

From History of Randolph County, Illinois (1948):

Benjamin Crane (Crain), with seven sons (Benjamin, Squire, William, James, Joel, Lewis, and John) came to Illinois about 1802, or probably two years earlier, and settled on Mary's river, about four miles above the mouth. These were men of decided character, and soon became known in all the other settlements. Their traits of character were well adapted to a pioneer country, and their influence in advancing the new region in which they had decided to live, was successfully exerted. They were the leading men in settling the country around the mouth of Mary's river, and the Island opposite, which bears the name of Crane's (Crains) Island. John lived upon this island for many years, and died there in 1850. Joel died the same year. The other brothers, except Lewis, who now lives in California (actually it was Texas), died several years previous. James Harvey and Nelson R. Crane (Crain), residents of Chester, are sons of John Crane.[3]

The above historical account was undoubtedly adapted from an account in Combined History of Randolph, Monroe, and Perry Counties published in 1883[4] :

The first settlement in Rockwood precinct was made in 1802 by Benjamin Crane, on section 22, township 7. range 6. He had seven sons, Benjamin, Squire, William, James, Joel, Lewis and John. They settled about the mouth of Mary's river and on the island opposite, which once bore the family name.

James H. Crain was born near the banks of Mary's river 18 Feb 1820. For some time he resided on Crain's Island, which was formerly owned and named by his father, John Crain.[5]

From History of Randolph County, Illinois (1948):

Mr. Mansker, father of Samuel Mansker, made a settlement on Liberty Island, in 1806, but the farm he made washed away in a few years, and he removed. Samuel Mansker settled upon the farm where he now lives in the same years that his father located upon the Island. He has been a sturdy, persevering and respectable citizen.

From Portrait and Biographical Record of Randolph, Jackson, and Perry Counties, Illinois p. 603:

In 1804 the family (John Mansker and son, Samuel Mansker) removed to Ste. Genevieve (now Perry) County, Missouri. In 1807, they came to Illinois and located at Liberty Island, opposite Rockwood. This continued to be their home for about five years, when a final move was made to section 10, township 8, range 6.

Samuel Hook took residence at Crains Island, probably as a laborer, to work the productive farms, which supplied fresh produce and grains to communities up and down the Mississippi river. Samuel's first wife, Minerva, died at age 27 at Crains Island, and his son, Green, died there:

According to Margie Erfourth, Green was left to live with neighbor William Allen when his dad, Samuel, left to go to the Civil War. Mr. Allen had become fond of young Green. While living with Mr. Allen, Green was playing with one of his ponies, and crawled between its front legs. The pony got startled and killed the eight year old boy.

Isaac McBee moved to Crains Island some time before 1828 and lived there until he died in 1842. He raised four children there. His daughter, Minerva, married Samuel Hook. His oldest son, John McBee, joined the California Gold Rush. His two younger sons, Osborne and Riley, fought in the Civil War as part of the Missouri militias.

From Combined History of Randolph, Monroe, and Perry Counties p. 468:

The first settler on Sheep Island was George W. Steele. He built a cabin and began improvement here in 1837. He was soon after drowned and was succeeded in ownership by William Burns, who was the last occupant.

The Mississippi river has a long history of flooding. As early as 1543, explorer Hernando Desoto encountered a flood on the river near Memphis, TN that extended over 40 days and likely extended to the lower reaches of the river. Chronicled by Garcilaso de la Vega.

The most devastating flood occurred in 1927, which totally swept away Crains Island:

The greatest flood in modern history on the Lower MS River! This event due to persistent excessive rainfall on many of its tributaries combined to swell the river across a vast flood plain that spanned 80 miles wide in some locations. This record flood event changed the course of U.S. history by launching then Department of Commerce Secretary, Herbert Hoover, into the national spotlight towards gaining the office of President. This massive flood prompted legislation to mitigate and gain control of the river through erection of levees, flood control projects and spillways to alleviate catastrophic flooding, under the passage of the Flood Control Act of 1928, the authority placed with the U.S. Army Corps of Engineers. This flood caused widespread socio-economic impacts inclusive of mass displacement of people living in the inundated areas, primarily indentured farmers and field workers. This event is still regarded as one of the costiliest natural disasters in U.S. history. Red River Landing recorded its 2nd highest flood crest of 60.94 ft on May 14th; This is still the record crest at Baton Rouge of 47.28 ft on May 15th; Donaldsonville record crest 36.01 ft on May 15th; New Orleans had two crests; the first at 21.00 ft on April 25th to rank 3rd highest on record, the second 20.50 ft on May 18th to rank 4th highest on record. A crevasse was dynamited in the levee at Caernarvon, LA, 14 miles below New Orleans to save the city from flooding, but at the expense of destructive flooding of St Bernard and Plaquemines Parishes. [Smith&Reed; Hoyt; USACE-MRD; O'Brien, Barry, AHPS]

The 1830 census for Crains Island was taken as a part of Randolph County, Illinois. This census appears to be entirely for Crains Island, but was not specifically identified as Crains Island. There were 716 households in this Crains Island census. A complete listing of all the household names in 1830, along with the page numbers of the census for which they are found, is here. To find out more specifics for each head of household, go to the corresponding page for the census on ancestry.com.

It appears that this portion of the 1850 census for Randolph County, Illinois contains the families who lived on Crains Island in 1850. The information in this spreadsheet is a work in progress.

On the west side of the Mississippi river from Crains Island was a township called Bois Brule, which is now part of Perry County, Missouri. Bois Brule is named by the French who had settlements at Kaskaskia and other locations in Illinois during the 1600s and early 1700s. Bois Brule means "mixed race" and applies particularly to the mixture of Indian and the French settlers. The French settlers who married Indian (Native American) women could choose to live either among the French or the Indians. In either case, during the 1600s and early 1700s, all the French and local Indians practiced the Catholic faith as taught by the Jesuits of that time.

One has to wonder whether the legal Illinois residents were being counted as Illinoisans, or whether their numbers were added as Missourians? 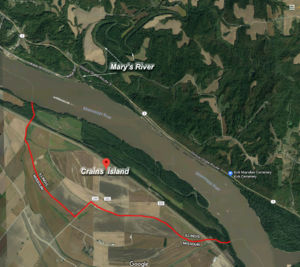 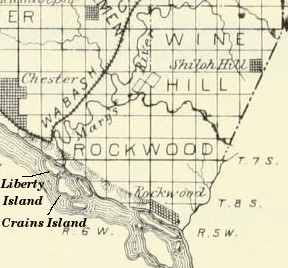 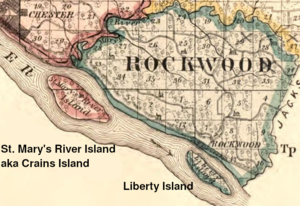 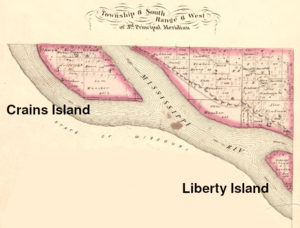