[send private message]
This page has been accessed 2,098 times.

The Crosh House is country lodge on a tract of several hundred acres, once referred to as the Abercorn Estate. It is located in Newtownstewart, named after Sir William Stewart (also appears as "Stuart"), 1st Baronet Stewart of Ramelton, who acquired 1,500 acres of property in 1613 from an absent James Haig, who was granted the land in 1610.

Sir Stewart died in 1646. In 1651, eight-year-old William Colquhoun inherited the estate under the condition he inhabited it. Later, in his will, he mandated the estate be inhabited by a Colhoun. It remained within the family until 1900. According to "Our Calhoun Family," by Orval Calhoun, the Inheritance was as follows:

Orval states that Margaret Anne passed away in 1900 with no living heir so her husband, John Patterson Porter (who actually died in 1871[1][2],) sold the estate to the Cummings Family. It was then sold to the Millar family, who sold it to the Beattie family, who have since restored the main house and tore down some outbuildings.

However, according to the 1901 Census of Ireland from 1901/1911, a majority of the property was owned by Samuel M. Miller, with the second majority being owned by Matthew Beattie.

Several notable families can trace their roots back to this estate, including the Campbells, Colquhouns, McCauslands, and some Cunninghams, Hamiltons and Montgomerys.

The property is privately owned. The estate is located on Plumbridge Road a few minutes outside of Newtownstewart. Its coordinates are 54.7283, -7.3613. 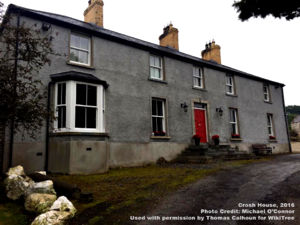