[send private message]
This page has been accessed 963 times.

The Piedmont area of North Carolina where the Deep River Coal Field is located was part of Chatham County initially. In 1907 that section of Chatham County and a part of Moore County were brought together to form Lee County, named for CSA general, Robert E. Lee. This area is now located in Lee County. [1]

Indians traveled across Chatham County long before it became established. Stone arrowheads found by early farmers as they cleared or plowed land was the most common evidence of their presence. Records show that the first settlers arriving in the mid-1700’s were primarily of European origin. They mostly migrated from the north or up the Cape Fear River valley from the southeast. The early settlers were concerned primarily with agricultural pursuits. [2]

The area surrounding the town of Farmville was first settled in the mid 1760s. Their numbers were small and were mostly farmers by trade. The first recorded structure inside the current town limits was a log cabin built about 1840. In the 1850s a church and a school were built. The town of Farmville was incorporated in 1872. [3]

There were three towns within a five mile band, Egypt, Gulf and Farmville. Egypt was renamed Cumnock in 1915 and Farmville was renamed Coal Glen after 1915. All of this to try to clear up confusion about the naming of the mines.

Initially there was an effort to work the surface outcroppings of coal by the local plantation owner in Chatham County. The property was purchased about 1851 by a group that brought in geologists and a shaft was sunk. [4] Egypt Coal Mine opened in 1856 in Chatham County (in a section that is now part of Lee County). [5]
There were several accidents in the mine prior to 1895 that are not included in the list of disasters because the names of the miners are not known or there were too few casualties. The first was 20 Feb 1857 when six miners were killed by an explosion of firedamp. Only a few months later, on 6 April 1857 there was another explosion that killed five miners. This one was also an explosion due to firedamp. The names of the miners are known but the number of fatalities is too low. [6]

On the morning of 19 December 1895, there were 2 shifts – half of the men working 7am – 7pm and the other half 7pm – 7am. Before either shift was allowed to enter the mine it was the duty of a man, called the “gas man” or the “fire boss” to inspect and examine thoroughly every part of the mine to determine if the air was all right –if there was any danger of an explosion. On that Thursday at 7am the “gas man”, Mr. Mills examined the mine and reported everything was all right. Then 66 men descended into the mine. Within a little over an hour, 40 of them were dead.

The main shaft is 465 feet deep. The cage or car only holds 12 people. The uninjured miners – 26 men – were brought to the surface and volunteers were called for to enter the mine to rescue the others. Some time passed before the rescue party went down as it was considered too dangerous. The superintendent of the mine, Mr. George F. Cant finally persuaded a few men to accompany him but they found only the dead.

The following day an inquest was held. Dr. H.T. Chapin, county coroner summoned a jury. The officers of the mine aided the coroner and jury in determining if the deceased were killed through the criminal negligence of any person or persons. No negligence could be discovered.

E. H. Davis (underground boss in the Egypt Coal Mine) He stated the mine was well ventilated and in good condition.
George F. Cant (mine superintendent) He testified that ventilation was strong. The cause of the explosion was a mystery. No dynamite was exploded.
Alfred Cox (miner for 5 years in Egypt mine). He testified that the ventilation was better now. Mr. Mills (the gas man) is as good as could be.
D.E. Teusch (miner) had worked in this mine in January 1895 and stayed for 6-8 weeks. He had been a miner for 22 years and had worked in mines in 13 states and Canada. He quit because of the “officiousness” of the boss. The other reason was the bad ventilation. Mr. Mills is a very careful man but Mr. Teusch did not think he fully understood the ventilation of the mine. He stated there is no law in NC protecting the miner or compelling the mine owner to ventilate their mines. He stated that he knew miners who refused to work in this mine because of the danger. He made a plea to the Legislature to pass a law to protect the miners.
G.B Hart (miner) He worked Slope No. 3. He quit working in Slope No. 1 last December because of the danger. Slope No. 3 has adequate air and ventilation. He stated that the boss in No. 1 did not manage the ventilation
James Poe (miner) was working Slope No 2. The mine was in good condition in his section. Two miners died out of 11 in his Slope.

After a short consultation, the jury rendered the following verdict: “that Charles Poe and other miners came to their death by an explosion in the Cumnock Coal Mine Dec. 19th 1895 by explosion of gas, the cause of said explosion being to us unknown, it being shown to us that the mine was in better condition than usual and was well ventilated."

All bodies were recovered and were buried at the expense of the mine owners. The two miners from Pennsylvania were sent to their families. There were 12 white men and 14 colored men. Among the dead were 2 young German brothers who had arrived only a few days before and whose relatives will probably never hear of their untimely deaths.

There were 28 widows and over 100 fatherless children left to mourn. Most of these families were entirely dependent on their dead husbands and fathers for their daily bread and now their only earthly support is gone.

One of the direct results of the mining disaster at Cumnock in 1895 was the passage of legislation by the North Carolina General Assembly in March 1897. It was intended to provide for the inspection and regulation of mines. Although it had a few shortcomings, the law was fairly comprehensive and covered various aspects of mine safety. The law can be viewed on pages 457-463 of the transcript of the 1897 session at North Carolina State Archives Digital Collection.

Mr. Edward Poe was a survivor. He was in charge of a small compress air engine in the mine. He said he heard the explosion followed by a low rumbling sound rushing toward him. for safety he dodged behind the engine and could very distinctly feel and hear the current of air as it rushed by him. When it reached the end of the tunnel it rebounded and rushed back with such force as to suck or drag him about 200 feet.

North Carolina established a Highway Historical Marker Program. There are two markers for the Egypt Coal mine, later called Cumnock MIne. 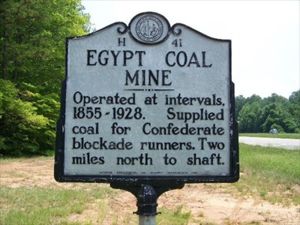 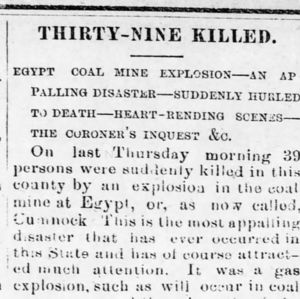