[send private message]
This page has been accessed 532 times.

This is a One Name Study to collect together in one place everything about one surname and the variants of that name. The hope is that other researchers like you will join our study to help make it a valuable reference point for people studying lines that cross or intersect. Please contact the project leader Enrico Davini mail, add categories to your profiles, add your questions to the bulletin board, add details of your name research, etc.

Memories: 1
Enter a personal reminiscence or story.
Enrico Davini
The surname came from Saint Davinus or Davino , from Armenia who arrived at Lucca, where dead in june 3rd,1050:he re-converted some citizens of Lucca to Catholicism and the citizens changed their surname. The grave is on the Saint Michele al foro church in Lucca. The information may be also interpreted: Davini as "son of Davino", the latin declination or as derivation of the name David. In caft , they are some other surnames spelling : Davino (Naples area), Davin (very uncommon) , D'Avini (probably trasncription error), D'Avino diffused in Naples - Campania area (as reported in Cognomi italiani).

The first information, with years, about Davini were found in Italy in the year 1224 in a contract for a land where the buyer is Bontempo and in 1228 when Ranierus is one of 4300 Pisa citiziens; other Davini are cited in 1285 (Ugolino e Turpino), between the people of Pisa, also in 1287 are reported in the book "I Brevi del Comune e del popolo di Pisa" while in the 1320 Jacobus is on the Languedoc names and Buglione in the "Statuto di Monteverdi" . Between 1324 and 1393 various Davini are reported as Ancient ("Anziani") in Pisa in the book "Chronica antianorum civitatis Pisarum" In Lucca instead Mercante is reported in 1331 and Ugolino, as Notaio in Lucca between february 1335 snd february 1339. In 1390 Davini reported in Camporgiano, look the book “Descrittione cronologica della Garfagnana” (1650). The 1st march 1588 is registered a contract of Giovanni e Domenico. In the 1652 born Giovanni Battista , after medician of the Duc of Modena. about 1678 born, in Antraccoli, Paolino and about 1665 in Pisa Simone: till now the first isvour oldest ancestry of an actual family of Bill and Gregory , now in USA, and from which we have the coat of arm and the second is on my line (my 10xG father). In the 1720 Carlo, Giacomo son, was named "Conte" in Cremona, and in 1729 Giovanni, Giacomo son, is inscribed as Noble in Cremona, with his coat od arm . In the 1764, a family is registered into the tax list ( Decima granducale) of Prato. In the 1791, Angiolo Davini received 90 Liras as oldage pension ( in Italia ). Confirmed information are available starting from the 1800 both from data present in the family that from data present in database available on internet or in library. For example Davini are present in the born, willing and dead from 1808 and 1837 in Toscana , in the Census of Lucca duchy (1823), in the Census of the granduchy of Tuscany (1841) and in the Como town census (1866-1936). In the 1848, the family of Prato of Giovanni and Giuseppe Davini is enclosed, with the act Deputazione sulla nobiltà e cittadinanza , in the Gold book of Nobilty, with its coat and tree. The information is confirmed by the same coat reported into "Raccolta Ceramelli Papiani" in the Florence Italian State Archivie. In the 1861-1864, Giovanni is the Major of Prato , in 1861 Luigi è co-director during exploration in Siena and Orbetello area, during 1895-1897 Francesco is secretary of "Fratellanza operaia di Botteghino" and Socrate was promoted from soldier to general , for militar honor in Macallè (1895), as reported in an newspaper article (1911) and in 2 books. From the information sent from the actual Davini family, the ancestry with the oldest date, in addition to Paolino and Simone,Gabriele (Antraccoli, 1798), Clemente (Lucca, 1828) and Roberto (Edolo, Brescia,1877); the other, reported my web site, are Bernardino (1827), David Andrea (1835, the great-gran father of David who writes a book in 2007), Bartolomeo (1850), Ottavio (Pisa, 1887), Alfredo (Vescovato, 1884), Attilio (Gadesco,1889), Alvaro (Prato, 1892). From the end of 1800, starts the emigration: over 35 in Brazil, instead over 100 Davini are registered to be arrived in New York between 1890 and 1924, other 34 in Argentina between 1882 and 1920, in France and in Scotland in census after the 1891 and in Norway in 1900. Between 1907 and 1959, 10 Davini emigrated in Australia and in Venezuela. Giuseppe is Parish in Brescia province (1925-1965). As regard World Wars, 14 Italians Davini are dead or lost in the WW1 (one buried in France) and 2 French Davini , whereas 24 Davini were enrolled in US Army. Furthemore 9 died in the WW2: 4 of them are dead or lost in Russian during the War: as reported in Cargnacco mausoleum near Udine. Further, during WW2 other 6 Davini dead, and one prisoner in Australia; 6 Davini were enrolled un US Army. In 1932, Persico Davini was acquitted as member of Comunist Party: he and other 12 Davini are reported in the "Casellario Politico centrale", a list of antifascist people. From 14 december 1943 to 11 april 1944 Delfo Davini was "Commissario" (as Mayor) in Sulmona. Tino Davini, from Brescia, was involved on returning dead soldiers from Russia. In the 1999 Davini are present in the phone list of Italy (in 127 communes), of France, Belgium , UK, Suisse, USA, Brasil and in the 2001 in Argentine ed Australia. In the 2000, Mario have installed a Jubilee stone on the wall in his house.

In 2007, a book about the history of "DAVID ANDREW DAVINI, SR. and BERTHA LOUISE EPP DAVINI - A Family with a Profound Influence On the City of Cloverdale, California 1944-2004" was written by David A. Davini, Jr. Staring from 2008, on Facebook over 480 Davini are inscribed on the Group COGNOME DAVINI. 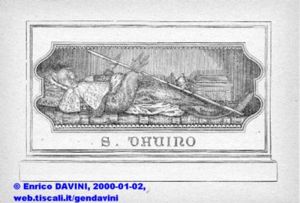 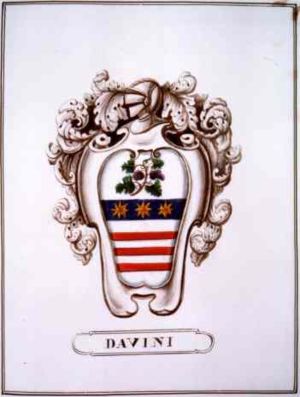