[send private message]
Last profile change on 15 Nov 2021
17:41: Azure Robinson edited the Text on Dawson, New Mexico One Place Study. [Thank Azure for this]
This page has been accessed 174 times.

In 1870, Lucien Maxwell sold his interest in the Maxwell Land Grant. The property was then sold two more times and in 1872 it was owned by a Dutch group who tried to get rent from squatters living on the grant. But they had problems finding out who was a legal landowner and who was not. When they found out that the Dawson land was heavily laced with coal, they attempted to evict Dawson. He consented to settle the matter in court.

The case was tried in the fall of 1893. The court held that the Land Grant Company could not prove Dawson did not own the land and the mineral rights. The courts also found Dawson had not bought only 1,000 acres instead he purchased 20,000 acres.

John Dawson and Charles Springer ranched the land until 1901. He then sold all but 1,200 acres of the property to the Dawson Fuel Company for $400,000. He continued to ranch his remaining land. The Dawson Family Cemetery is NOT part of the Dawson Company Town cemetery and is located on private land.

The Dawson Fuel Co. was founded by Charles Eddy of El Paso, Texas. A 137-mile-long railroad was built from the Dawson mine to Tucumcari, New Mexico to link with the Rock Island Line. By August 1, 1901, Dawson was well on the way to becoming the center of the largest coal mining operation in New Mexico.

Tragedy struck the community on September 14, 1903, when a fire broke out in the No. 1 Mine, followed by several explosions. Luckily, 500 miners escaped. After a week the fire was controlled and three were dead.

By 1905, 124 coke ovens were belching fire and the town was thriving with about 2,000 residents. The town had a post office, mercantile, school, newspaper, and a large hotel.} The Phelps Dodge Corporation bought the Dawson mines in 1906 started to build a company town. Spacious homes for all miners were built and each home was supplied with water from the company's water system.

Phelps Dodge also supported two churches, one Catholic and one Protestant. Children attended either the Central Elementary School in downtown Dawson or the Douglas Elementary School on Capitan Hill. A large high school building was built that eventually employed 40 teachers and their athletic teams won many state championships. The company also built a steam-powered electric plant, which powered not only Dawson but also the nearby towns of Walsenburg and Raton. Providing good-paying jobs for the residents, the extra features of the company town helped keep the employment stable and under the new management, Dawson's population grew quickly to 3,500.

Dawson drew miners from Italy, China, Poland, Germany, Greece, Britain, Finland, Sweden, and Mexico. The miners worked together to dig the coal that fueled an area equal to 1/6 of the US and Dawson grew into a company town of about 9,000.

Phelps Dodge tried to make the mines as safe as possible. In 1913, Stag Canyon Mine No. 2 was considered by coal-mining experts as "the highest achievement in modern equipment and safety appliances that exists in the world." The New Mexico Inspector of Mines completed two days of inspection of the Dawson pits on October 20, 1913, and reported that Stag Canyon Mine No. 2 was totally "free from traces of gas, and in splendid general condition."

Yet, two days after the mine inspection, Dawson suffered its worst catastrophe. On October 22, 1913, 284 miners reported to work at Stag Canyon Mine No. 2. Work went on as usual until a little after three p.m. when the mine was rocked by a huge explosion that sent a tongue of fire 100 feet out of the tunnel mouth shaking the homes in Dawson two miles away.

Phelps Dodge sent a trainload of doctors, nurses, and medical supplies up from El Paso. Colorado miners who were striking stopped picketing and offered to form rescue teams. Working around the clock, rows of bodies were brought to the surface. The distraught wives and family members clogged and impeded the operations around the mouth of the mine. Only 23 of the 286 workers were found alive. Two of the rescuers were themselves killed by falling boulders in the shaft.

Mass funerals were conducted for the victims and row upon row of graves dug, making it necessary to extend the cemetery far up the hill. The cemetery was marked by white iron crosses and the burials continued for weeks. It was the second-worst mine disaster of the century.

Investigators determined that the explosion had been caused by an overcharged blast in a dusty pillar section of the mine. The Bureau of Mines set that blasting was to be conducted only when all miners were evacuated and water sprays were to be used to settle the coal dust. These rules had been ignored. Safety measures were increased after the disastrous explosion and subsequent accidents had only a few fatalities.

In 1918 the Dawson mines reached their peak production of over four million tons of coal.

Tragedy hit Dawson again February 8, 1923, at about 2:20 PM, in Stag Canyon Mine No. 1. A mine train jumped its track, hit the supporting timbers of the tunnel mouth, and ignited coal dust in the mine. There were 123 men in the mine at the time. Early the next morning two miners who had been in an isolated section of the mine walked out. Many women who lost husbands in the earlier disaster lost sons in this incident.

Dawson continued to thrive for almost three decades, but gradually railroads began to convert to diesel-electric locomotives, and natural gas and heating oil replaced coal as the fuel to heat homes. There was a brief resurgence of mining during World War II, but on April 30, 1950, the mine and company town was shut down.

Phelps Dodge sold the whole town, buildings and all, to a salvage company in Phoenix. The giant coal washer was shipped piece by piece to Kentucky and several houses were moved out and relocated. The company safe ended up in the Phelps Dodge headquarters in Bisbee, Arizona, where it is still displayed at the mining museum.

The cemetery, a deeply moving site, is now the only part of Dawson still open to the visitor. Over 350 white iron crosses in the Dawson Cemetery mark the graves of those who perished in the mining disasters. These silent sentinels, some with individual names and some unmarked, are poignant reminders of the tragic deaths of the victims, and, more importantly, their lives.

Dawson had been forgotten until two brothers went on metal detecting expedition in 1991. Dale and Lloyd Christian found the abandoned cemetery. Dale Christian returned to Albuquerque and petitioned the New Mexico State Historic Preservation Division to place the cemetery on the National Register of Historic Places.[8] The New Mexico Office of Cultural Affairs was unaware that the cemetery even existed and asked Christian to provide measurements of the site. Not only did he provide the measurements, but he also provided pictures and an accounting of the number of graves and pictures. The Office of Cultural Affairs placed the Dawson Cemetery on the National Register on April 9, 1992.

The site is currently part of a working ranch and except for the cemetery, the townsite is on private property. 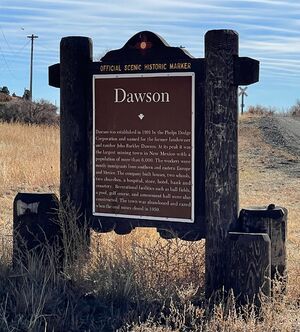 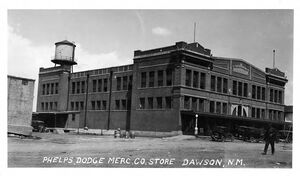 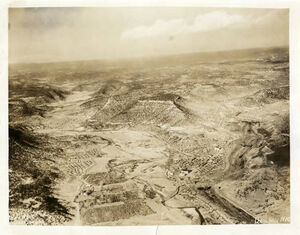 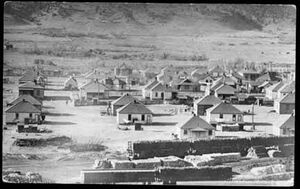