[send private message]
This page has been accessed 45 times.

The goal of this project is to ...add any/ALL Research regarding the DISPUTE of the Maryland, to Virginia, to the Carolina's to Tennessee, to Louisiana DeMoss Lineage.

Right now this project just has one member, me.

To Research, and update the PROFILES with any DATA that is located.
IF it DISPUTES what the Manager has on the profiles please do not just delete but add the "FREE SPACE" and move it here. If there is already a "1st SOURCE" then we need to add not delete...

THE DEMOSS FAMILY THAT CAME TO LOUISIANA

"As has been the oral tradition that several DeMoss of Bellevue family has recounted, from the book THE DEMOSS FAMILY THAT CAME TO LOUISIANA.
The book gives the genealogy of the Louisiana DeMoss line from Abraham DeMoss to Henry Lee DeMoss and his descendants.
Recounting of James DeMoss' of Bellevue, TN owning land in North Carolina that he goes back to sell in 1800, and then returns to Bellevue, TN.
James DeMoss and Zana were co-founders of Bellevue, TN. James gave over part of his property for a cemetery in Bellevue where he and Zana were buried.

Joanna DeMoss October 1, 1754 - December 5, 1854
married twice , she was buried under the last name Haworth in Old Hopewell Cemetery, Indiana.
"Benjamin Van Horn (misspelled Van Churn) 1750 - February 27. 1802 m 1783 South Carolina . No evidence of yet of them having children, no DNA submissions from anyone claiming to be a descendant. He is listed on a 1790 Census as having one male and one female child under 16 living in his household.

Several Phoebe DNA matches have been identified as being related to the Bellevue/Nashville DeMoss descendants of James and Phoebe Cox. They are only matched on DNA test sites none have submitted a test to the DNA project for deeper study.

A direct line mtDNA descendant of Phoebe Cox has been identified and tested, both autosomal DNA and mtDNA haplogroup from Phoebe Cox identified as H1a. The sample subject exhibits extensive X matches to the Bellevue, Tennessee DeMoss descendants that make claim from all the identified children of Zana Taylor and James DeMoss other than Joanna of which has not had any descendants come forward." (A DeMoss Descendant, of f-a-g)

All RESEARCH records from the f-a-g MEMORIAL, as Creator, I am moving these RESEARCH items over

[citation needed] on all, BEFORE we add any biography to the MEMORIAL itself.
Louis married Catherine Callett (?) circa. 1712-St. John's Parish, Baltimore County, Maryland.

Father of the following known children;

NOT that ancestry is a source, but the Marriage record if we can get a SHARED version...

"The major revelations come with the family of Thomas DeMoss (1726). (Senior)

First: there is a 1752 marriage record from Morristown, NJ that ties him to Abiah Beach.

After marriage, they moved to Virginia, eventually settling in Bedford County by 1774.

Second: Their children are as follows:

I have no records for him after that. 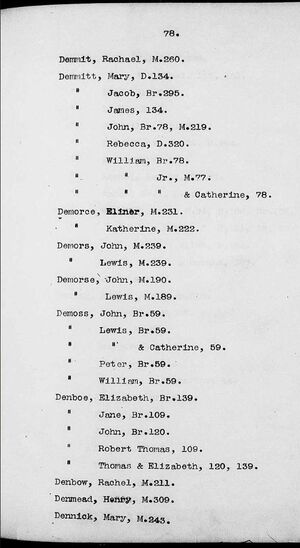