[send private message]
This page has been accessed 1,815 times.

Comanche and Waco tribes were pushed further west as more Europeans emigrated to British and French colonies on the East Coast.[2]

1528 - The first Europeans were Four survivors of the ill-fated 1528 Narváez expedition. Only Alvar Nunez Cabeza de Vaca and Estevanico were rescued by their fellow Spaniards and Estevanico served as a guide and was murdered shortly after being rescued::

1685–1690 France plants its flag on Texas soil, but departs after only five years.[1]
1811 Spain abolishes slavery in most of its territories (exception: Caribbean Islands, Cuba, Puerto Rico, Santo Domingo)

1821 Mexico claims its independence from Spain. Anglo-Americans from the United States migrated to settle in Texas swore an oath to Mexico to gain land grants. All had to converse in Spanish as well.

French explorer René Robert Cavelier, Sieur de La Salle is thought to have crossed the county on his way westward from Victoria County . La Bahía was a common route, no evidence of any settlements exist before the Anglo homesteaders.

"Tumlinson Fort, also known as the Tumlinson blockhouse, was on the headwaters of Brushy Creek in what is now Williamson County."

1826 The Arthur Burns family established the first home in the county on Irish Creek near present Cuero. Irish Creek Settlement became one of the two principal areas of growth, the other being Upper Cuero Creek Settlement, which was founded in 1827.

1826-1831 settlers arrived from Tennessee, Kentucky, Missouri, and other Southern states, even Europe.
1827 - treaty with the Karankawa was negotiated
1828 Jean Louis Berlandier visits, he finds settler cabins, a fort-like barricade, agriculture and livestock, as well as nearby villages of Tonkawa and Karankawa .[1]

Gonzales Colony is established and named for Rafael Gonzáles, governor of Coahuila y Tejas. It was settled by the first Anglo-American community west of the Colorado River.[2]

1831 The government sends a 6-pound cannon to Gonzales for settlers' protection against Indian raids. (Come and Take It Cannon)[2]
1832 - Charles Lockhart and Clements served in this government of the Mexican municipality.

1832 -35 Gonzales Colony sent delegates to conventions (1832–1835) to discuss settlers' disagreements with Mexico.[1]
September 1835– The Mexican government viewed the conventions as treason. Troops are sent to Gonzales to retrieve the cannon. Citizens refused to give up the cannon.....[2]

October 2, 1835 – The Battle of Gonzales became the first shots fired in the Texas Revolution. The colonists put up armed resistance, with the cannon pointed at the Mexican troops, and above it a banner proclaiming, "Come and take it". Commemoration of the event has become the annual "Come and Take It Festival".[1]
1835-36 Texas Revolution involving many battles, most know are Concepcion, Siege of Bexar, Storming of Bexar, the Battle of the Alamo, Bahia, Goliad, and San Jacinto.

Oct 13 – Dec 9, 1835 – Siege of Bexar - first major campaign of the Texas Revolution . Dec, 1835 - Battle of Bexar - Dec 1835 was a Texian victory.[1]
February 23, 1836 – The Army led by Santa Anna arrived and began the Siege of the Alamo. Alamo messenger Launcelot Smither carried Col William Barrett Travis' letter to the people of Gonzales and all colonies of Texas. Col William Barrett Travis's letter stating "the enemy is in sight" and requesting men and provisions.[1]
Feb 24, 1836 – Capt Albert Martin delivered the famous "Victory or Death" Col. Travis letter addressed "To the People of Texas and All Americans in the World", stating the direness of the situation to Gonzales. Launcelot Smither then took the letter to San Felipe, site of the provisional Texas government. in Gonzales [1]
February 27, 1836 – Gonzales Alamo Relief Force of 32 men, led by Lt George Chester Kimble (Kimball), depart to join the defenders within the Alamo.[2]
March 1, 1836 – The Gonzales "Immortal 32" make their way inside the The Alamo [1]

March 2-5, 1836 – Texas Declaration of Independence from Mexico establishes the Republic of Texas

The Mexican Army overran the Alamo. All Alamo Defenders including Tejanos and the Gonzales Alamo Relief Force of 32 were killed, except one man who hid in the chapel and one man who "elected to leave the Alamo rather than fight for the cause. [2]

Mar 13-14, Samuel (Sam) Houston orders town of Gonzales torched to the ground, and makes his headquarters under a county oak tree. All fear the Mexican Army is headed for Gonzales.[2][1]
Apr 21-22 - Battle of San Jacinto, Santa Anna is defeated.[2][1]
May 14 – Santa Anna signs the Treaties of Velasco.[2]
1836 -Gonzales County -created, named for its county seat, the city of Gonzales by legislature. The county was created in 1836
1837 - Gonzales County organized
1838 Gonzales men found the town of Walnut Springs (re-named Seguin, Texas in honor of Juan Nepomuceno Seguin).

1840 Gonzales men join the Battle of Plum Creek against Buffalo Hump and the Comanche.[1]
Feb 2, 1842 -DeWitt County had 2 dates of origin: DeWitt County (Judicial), was created 1842. This was declared unconstitutional in the fall.

1846 DeWitt County was finally approved. as a county. This began as DeWitt Colony in the years when Texas was a colony.[8]
1846 Judge James McCulloch Baker was appointed by Governor James Pinckney Henderson to establish the temporary county government. First county seat courthouse was Daniel Boone Friar's store at the junction of the La Bahía Road and the Gonzales-Victoria road.
Nov 28, 1850, Clinton was the county seat until Cuero became county seat in 1876.
German settlers preferred the sweet potato over Irish potato. Many sweet potato crops are grown here.

1850 Gonzales College is founded by slave-owning planters, and is the first institution in Texas to confer A.B. degrees for women.[2]
1853 The Gonzales Inquirer begins publication.[2]
1860 County population is 8,059, including 3,168 slaves.[1]
1861 County votes 802–80 in favor of secession from the Union.[1]
February 1, 1861 – Texas secedes from the Union (the 7th state to secede, therefore the 7-Star Confederate Flag was the Flag the Texas Militia used throughout the Civil War)
1861 -Dewitt County voted in favor of secession from the Union. DeWitt military units served in Confederacy.

1872- Hopkinsville]] was established by Henry Hopkins, a former slave of Judge Henry Clay Pleasants. this was the judge who brought end to the "Sutton-Taylor Feud.

1874 Galveston, Harrisburg, and San Antonio Railroad|The Galveston, Harrisburg and San Antonio Railway]] is built through the eastern and northern part of the county.[2]
1877 Texas and New Orleans Railway comes to the county.
1881 The Gonzales Branch Railroad is chartered.
1885San Antonio and Aransas Pass Railroad runs through the county.
1898 Twenty-three county men serve, with two casualties, during the Spanish–American War.
http://www.cuerodc.com/community-profile/history-of-cuero/
Three serve with the Rough Riders.[2]
1905 The Southern Pacific line bypasses the community of Rancho.
World War I – 1,106 men from the county serve. See: Texans in the Great War and Texas in The Great War [1]

Residents began a school that was active until 1956, and established the Antioch Baptist Church

1935 – Governor James Allred dedicates a monument in community of Cost, commemorating the first shot of the Texas Revolution. Battle of Gonzales.
1941- US Army Air Corps opened Cuero Field, which had trained 290 cadets, at Cuero Municipal Airport as a pilot flight school.. The school was deactivated in 1944.

1846 Two dates for origin are listed forDeWi The county was established in 1846 and it is named for Green DeWitt The present county was part of DeWitt colony and settlement dates to settlement in 1825. The county officially has two dates of origin, 1842 and 1846.
The present-day DeWitt County was formed from Goliad, Gonzales, and Victoria counties.

1846 A temporary county government was set up in 1846. County seat was Daniel Boone Friar's store at the junction of the La Bahía Road and the Gonzales-Victoria road.

1857 3rd Courthouse No image Building Completion Date: 1857. Built in County Seat: Clinton/Cuero. According to Terry Jeanson, Texas Escape: people did not like this courthouse, Moved to Cuero 1876. Present Status: Gone. [11]

1897 5th County Courthouse is located in Cuero, Texas. When It was built the builders vanished without putting the roof on. All feared they would have to hold court outside under trees. It has been renovated and still in use today. (one of the older courthouses!! This is Romanesque Revival style (made of Brown sandstone with pink granite accents which came from Marble Falls. The renovation of the outside was complete. October 27th (2007), but the photographer states there is much more to do. This building's original slate roof, clock and doors are done. It is said there is more to do on the interior. the building is far from done. - Terry Jeanson,[10]

Location -Gulf Coast Plain in SE Texas about 45 miles inland from Copano Bay.
Latitude/Longitude- center point is at 29°05' north latitude and 97°23' west longitude.
Size: 910 square miles, most of which is nearly level to sloping;
Elevation-Greatest elevation is in NW (150 ft in E corner) to 540 feet above sea level in SW.
Post Oak Savannah (Eastern corner and an area along the Gonzales county line) with tall grasses and, along streams, oak, elm, and pecan trees.
Soil - Most of the county is part of the South Texas Plains with dark calcareous clays and sandy and clay loams
Grasses/Trees-clay and so support tall grasses, small trees, shrubs, and crops.
Climate is humid-subtropical.
Temperature - high of 96° F in July- low 44° in January. 1949 had records of 2° and 1954 (110°)
Frost free season- 270 days from March to late November.
Precipitation/rainfall - 33.37 inches, mostly thundershowers.
Creeks/Rivers -Guadalupe River and tributaries, Coleto Creek with smaller creeks, Sandies, Salt, Smith, McCoy, Irish, Cuero, and Clear creeks.

This is a list of some of the Colonists from DeWitt Colony The ones which show green are profiles which are present on WikiTree. Green DeWitt Colony

DeWitt's Colony, The Colonists encountered many boundary arguments, illegal trade episodes, attacks from Native Americans in their early years of colonization. Gonzales and DeWitt Colony underwent the first battle against the Mexican Army when it tried to take back their Come and Take It Cannon.

Colonists who held grants in the present-day county boundaries are::

Heirs of Men FALLEN at the ALAMO:

These settlers enjoyed relative peace. A treaty with the Karankawas]] was negotiated in 1827, Tonkawa]] raids were only occasional, and boundary disputes with nearby De León's colony to the south were settled without bloodshed. The only towns in the area were Gonzales to the north, Guadalupe Victoria to the south, and Bexar, the seat of government, to the northwest.

Between 1826 and 1831 the area was settled by people primarily from Tennessee, Kentucky, Missouri, and other Southern states.

Cuero has a large turkey growing industry and calls itself as the "Turkey Capital of the World". The turkey industry began serious raising of turkeys as an enterprise in 1908. It celebrates the industry and advertises itself by an annual turkey drive down Main Street. 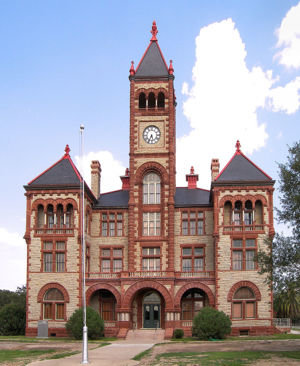 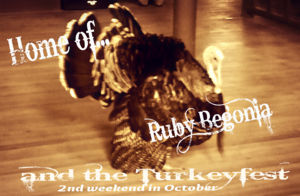 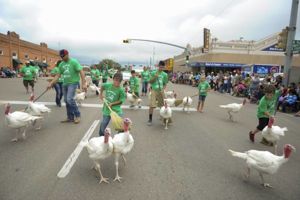 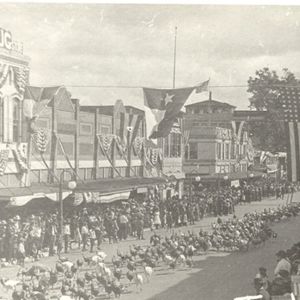 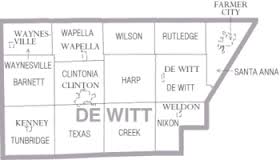