[send private message]
This page has been accessed 1,229 times.

Pre 1500's Spring Creek is a large off shoot of the Flint River. It is fed by underground springs located in limestone sinks. Archaeologists have found evidence of native peoples from Weeden Island era (A.D. 300-1000 A.D.) camped at sites along Spring Creek in Decatur County, Georgia. [1]

1540 Hernando de Soto passed through Decatur county region as he explored Georgia and encountered the Flint River, which required a ferry to be built in order to cross.[2]
1703 an army of (800) Royal Spanish regulars, Florida Spanish militia and Apalachee militia tried to invade the Colony of Carolina, on a road near the Apalachicola and Flint Rivers. Area Indians of the Flint River opposed them. The Creeks and Chickasaws left fires burning in their camp to appear as occupied. The Spanish attacked this empty camp, and the Creeks and Chickasaws surrounded them all, killing (600) Spanish soldiers, ending the Spanish territory ambitions for the State of Georgia.[3]

1755 map shows Decatur County to be the last known location of the Chikoki Indians. At the time, they were much more primitive than other tribes. The word “Chiloki” is actually a Totonac word from Mexico, which means “primitive or barbarian.”[3]
1765 When the white settlers arrived, Native Americans lived here. The Indian settlement, called Pucknawhitla was located on the area where Bainbridge is today. After this the settlement name was changed to Burgess Town, for a European trader who set up a trading post at the settlement, and then to Fort Hughes for a nearby camp.[4]

Colonial Period -mid-1820s British and French maps show towns/villages in the region around present day Decatur County not strongly associated with the Creek Indian Confederacy. Decatur County’s Creek Indians were friendly with first the Colony of Georgia and then, the State of Georgia, until the tribal towns were forced out of lower SW Georgia in 1814. This region was thought to be ideal for growing cotton. [3]
mid 1700's Decatur County was an ideal location for bands of hunters and gatherers. It contained many creeks and wetlands harboring game animals, and edible plants. Native Americans would set a brush fire to drive out he deer, bison and elk, which cleared the shrubs from the land.
1813-1814 Creeks, Chickasaws and Chilokee of Decatur County were allies of the United States in the War of 1812, and refused to join a faction of the Creek Confederacy that was allied with Great Britain. The U.S.declared war on the Redsticks after whites were killed at Fort Mims massacre. Creeks were fighting British Rangers from Florida who had attacked plantations. Many more west Georgia Creeks joined the Redstick war, including a Creek named William McIntosh, who was appointed a Brigadier General in the U.S. Army. [3]
1823 Cut from part of Early County, Decatur County, Georgia was named for Commodore Stephen Decatur of the war of 1812-1815, a naval war hero. [1]

Stephen Decatur defeated Barbary Coast pirates near Tripoli. Its county seat is Bainbridge which was named in honor of Commodore William Bainbridge who commanded the U.S.S. Constitution, known as "Old Ironsides.[2][5]

Decatur County, Georgia has a location in the SW part of the state of Georgia.. Surrounding counties are Baker, Grady, Miller, Mitchell and Seminole counties. Decatur has a size of 596.8 sq. miles and is considered to be among the largest counties. Its cities include Attapulgus, Bainbridge, Climax, and Brinson which are all incorporated cities.. Climax was named this name due to being the highest point on the railroad between the Chattahoochee River and Savannah. Decatur County is named for the naval war hero, Stephen Decatur, a War of 1812 (1812-15) whose toast was: "Our country! In her intercourse with foreign nations may she always be in the right; but our country, right or wrong." [1]

1824 - Georgia legislature decided to rename the old "Fort Hughes" to be the new county seat of Decatur County. It was named for Commodore William Bainbridge. The city has a nickname of the "Oak City", due to its large oak trees. Its population was 12,697 in 2010, with business such as carpet and manufacturing, agriculture, glass press manufacturing health and education institutions..[4]

Transportation in Decatur county, Georgia
The county is split from north to south by the Georgia, Florida & Alabama Railway Company splits the county from north to south, between Curabelle on the Gulf of Mexico and Columbus. The terminus is Columbus, with extension to Birmingham, Alabama. The headquarters for the railway is Bainbridge. There are general offices and shops, which employ many men.[6]
Transportation on the rivers are the Callahan Line of steamers. These steamers operate on the Flint River between Bainbridge and the Gulf of Mexico and can run all year long due to the mild winters. The Steamers connect at Apalachicola with the Tarpon Line from Mobile, New Orleans and ports on the Mississippi river. Heavy freight is brought in from the west with lower rates than railways can bring. [6]

1)Georgia Southwestern & Gulf is a new railroad is being constructed between Cordele, GA and St. Andrews-on-the-Gulf. to pass through Donalsonville in the west part of Decatur county.[6]
2) Georgia Northeastern is planned to run from Bainbridge to Pelham for connection to other lines for Augusta, Georgia as the northern terminal.[6]

Decatur County is located above an aquifer of Florida. The county is crossed by the Flint River.

When the U.S, Army Corps of Engineers built a dam on the Flint River, Lake Seminole was created and became the SW boundary for Decatur County. Bass fishing is plentiful in Lake Seminole. A national tournament is held there. Jack Wingate's lodge and marina were shown in the Mark Trail Comic Strip, drawn by Ed Dodd, cartoonist.[1]

Bainbridge, Decatur County Seat is 40 miles north of Tallahassee Florida, 60 miles of Dothan, Alabama, and 60 miles south of Albany, Georgia in extreme southwest corner of the state of Georgia. Highways 84 and 27 intersect in Bainbridge.

The city stands near the Flint River, and is one of Georgia's two inland ports.[4]

1905 The steamboat Ocheese, carrying barrels of turpentine, is moored at a cotton dock on the Flint River near Bainbridge. [4]

1941-45 World War II an airport was built near Bainbridge to train pilots. At the end of the war this airport became a camp for German Prisoners of War.[4]

1960 Bainbridge State Hospital was built for the developmentally challenged on the same property which was first a World War II airport, German prisoner of war camp.[4]
1973 Bainbridge State College -began with service. as a 2-year college opening in 1973.. It is now a 4 year college with shows 2,800 students, part of University of Georgia campus in 2007.

The Historic district of Bainbridge includes most of downtown area and the antebellum homes of the area. Best known known is Willis Park which has a Victorian gazebo, and town events are held here. The Clock tower and Courthouse are nearby. Near here is a museum located in Bainbridge old city hall/fire station/jail building. This is maintained by the Decatur County Historical Society and Decatur County Council for the Arts uses the building.[4]

1995-2004 The Gilbert H. Gragg Library in Bainbridge is the headquarters for the Southwest Georgia Regional Library System for Decatur, Miller, and Seminole counties. The collection in the library has over 163,000 volumes along with computers and audiovisual materials, with meeting facilities include satellite and computer resources as well. The Southwest Georgia Regional Library System won the National Award for Library Service in 2002. The Gilbert H Gragg Decatur County Library is a subregional library for the blind and physically handicapped for 16 southwest Georgia counties.[4][1]

According to the 2010 U.S. census the population of Bainbridge was 12,697. The major employment sectors are carpet and fiber manufacturing, agribusiness, glasspress manufacturing.

Willis Park in downtown Bainbridge is in the historic district. It features a Victorian gazebo that hosts many town events. The clock tower of the Decatur County Courthouse rises over the park in the background.[4]

The Cypress trees roots can be seen beneath the water of the long life-cypress trees growing along Spring Creek in Bainbridge.[4][1]

The boat basin on the Georgia port of Bainbridge, has activities at its Earle May Boat Basin and Seminole State Park. Here there is a performing arts building, baseball and softball fields, a beach, petting zoo, museum, holding ponds which are landscaped and surrounded by wooden walkways lighting and benches to view the activities and sights.[4][1]

The governing body is a 6-member board of commissioners with staggering 4-yr terms elected from districts.. The chairman is elected by the board from among their own members. County administrator manages day to day operations.

Size- total area of 623 square miles (1,610 km2). 597 square miles (1,550 km2) is land and 26 square miles (67 km2) (4.2%) is water.
Soil- soil is a gray loam, with some Norfolk sandy loam and the Gadsden sand, and much of the phenomenally rich brown pebbly land. The subsoil is of red or yellow clay with sand mixture.
Sub-Basins
Location- in Georgia- in the SW corner of the state, adjoining Baker, Grady, Miller, Mitchell, and Seminole counties

Bainbridge is a seaport linked to the Gulf of Mexico via Florida's Apalachicola River.
Georgia Ports Authority manages Port Bainbridge.
Length, bredth - Length, 36 m. ; breadth, 25 m.; area square miles, 900.
Climate - temperate and pleasant
Between the Flint and Chattahoochee rivers is a pine barren
Soil-silicious
Crops -some fertile spots, which are well calculated for the growth of cotton and corn.
Creeks, Rivers-Spring Creek is a large body of water. several other streams-Musquito, Willocooche
Locale-- Bainbridge is the county town, on the east side of the Flint River, on a beautiful bluff, lift) miles from Milledgeville. Fort Scott is below Bainbridge, on the Flint River. Attapulgus is 12 miles SE of Bainbridge. 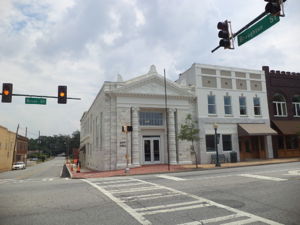 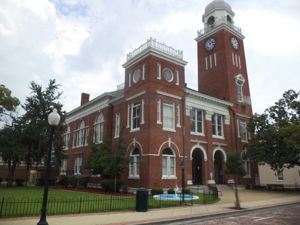 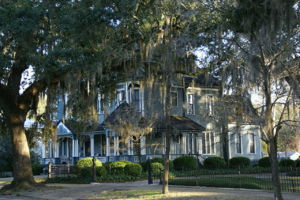 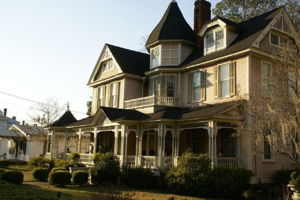 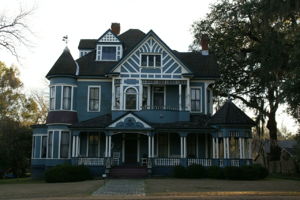