[send private message]
This page has been accessed 2,114 times.

THIS PROFILE WAS CREATED TO PRESENT A PUBLISHED CAIN FAMILY HISTORY THAT APPLIES TO NICHOLAS CAIN AND HIS LINE OF DESCENDANTS.

In chapter one, the authors present several general conclusions about this Cain family. There were 160 different Cain families in America for the first Federal Census in 1790. The authors studied several of these lines and, as a result of those studies, reached the following conclusions. First, the Nicholas Cain line was of foreign origin, as are most, if not all white, families in America. The second is that Nicholas was probably not the first Cain immigrant and there may have been two or three generations born before 1730 in America. Another is that this Cain line is not of English origin, but rather of Dutch or German nationality. This is because of where they lived, in less populated areas, and also who they traveled with and settled among, who were also of Dutch or German nationality. Commonly used given names and religious affiliation were also discussed as factors in determining the profile of a family line.
In this first chapter are four examples of Cain families with similar profiles, which are detailed, but no conclusive evidence was found at the time of writing for connecting them to the line of Nicholas. In other places in the book individuals or families are mentioned who, for one reason or another, are not related, probably to be explicit and avoid confusion. These opinions are given and identified as only the authors views. This is a summary and paraphrase of chapter one that is more usefully informative than most first chapters in family history books, which otherwise deal with flowery heraldry and pure unsupported legend.

This profile page was created to showcase the data, sources, reasoning and conclusions contained in the published Cane family history book "The Descendants of Nicholas Cain" 1736-1986 by Wayne R. Cain and Shirley J. Evans, copyright 1986. Therefore, the first purpose for this page is to make this information more accessible to everyone who is researching this family.

This book contains a treasure trove of images of source documents pertaining to members of this family. The prose narrative describes many details that were probably accumulated from a range of family history collections and was written in an engaging style.

This book contains information on the following profiles, among others:


There is no information in this book on the following profiles:

Daniel Cain (1685 - 1750)
Margaret (McBooy) Cain (1685 - 1745)
Catharina Margaretha (Mann) Cain (abt. 1717 - 1785)
Margaret/Margaretha/Magdelina, mother of Ulrich - only record is Philadelphia passenger list
Mary Fitch born 1658 in Boston
Catharina Margaretha (Catherine) Mann Possibly a composite of two or more identities, one of which may be Catherine (no middle name and unknown maiden name)
Ulrich Wilhelm Cain (1730 - 1783) Ulrich has one supporting source, which is a Philadelphia passenger list that connects him to mother, Margaret and Father Nicholas Carn (not Cain). From Ralph B. Strassburger's Pennsylvania German Pioneers lists for the Pink Plaisance (pp. 78-83) List 22A, 22B, 22C
Jeridiah Cain (1760) There is some information on FamilySearch.org that indicates Jeridiah may be connected to three brothers named Cain who lived in North Carolina. The FS profile for Jeridiah does have one source placing him in NC, but the connection to the other three Cains appears to only be geographically circumstantial.


This is not saying that these profiles should not be connected to the other profiles in this family, it is simply saying that in 1986 there was no evidence that they are connected. Therefore, the second purpose of creating this page is to attract new information and sources that does support these latter profiles. In the event it is determined that there is supported evidence that these individuals should not be connected, or if there is simply a lack of evidence that they should be connected, then they will be disconnected in a proper manner, with consensual input. I have proposed a temporary way to handle POSSIBLE unproven relationships on the profiles of Nicholas, Ulrich, Jeridiah and James, as well as Elizabeth Agnes Kirk and James Cain, both from Montgomery county, Virginia.

posted 11 Jul 2017 by Steve Lake   [thank Steve]
Steve Lake
In this space, I am not entering "memories." I have started a "Collaboration Process" on Nicholas Cain's profile, which will proceed at weekly intervals. Between those deadlines I will be collecting data and sources (and non-sources), but do not want to have my constant activity distract from any contributions by others. I have collected some material today in a word file, but I want to have it accessible from several devices, so I am copying it here. 5/22/17 SEL.

1. I'd have to see a copy of The Ever Changing Smith Family in order to judge for myself whether it was up to acceptable genealogical standards for original sources. I would at least have to see a transcription or image of relevant pages or chapters to judge a number of things, such as how the Cain family is tied to the Smith's, whether this Cain line is the same as the one I am researching, what the extent of information is on the Cain's, is it just one person, one family or several generations, etc. Not found on WorldCAT or Amazon.

2. Brøderbund Software were early publishers of Family Tree Maker which was sold supported by CDs of public genealogy data. One opinion was that you would be citing unsourced trees based on more unsourced trees if you relied on this as a "source." It takes a lot of faith or gullibility, depending on which way you look at it, to cite someone else's tree. I have seen many which are not reliable. I see many trees which have huge numbers of people (10,000 - 500,000) and I wonder how low there standards must be to connect such large numbers. I don't know how many are in my tree(s), numbers aren't important if they can't be proven. My WikiTree watchlist is at 529 profiles of which I am manager of on trusted list, which represents a little over a year of activity, but is not as complete as my tree on FamilySearch which I have been working on since 2012.

3. This source is cited on a few web pages, but the actual newsletter does not appear to be accessible on the internet. I do not know where to find it. Chances are that it is a collection of articles which may or may not be properly sourced.

4. This source is cited on several web pages, but the actual publication does not appear to be accessible on the internet. Published in 2014, it contains the original lists of arrivals in the port of Philadelphia from 1727 to 1808. These lists may be indexed and searchable in a database on Ancestry, FamilySearch, etc. Copies of this book may be found on WorldCAT at many libraries, including two within 15 miles of where I live.

6. This is an original source, but there is no citation that would be helpful for finding it, such as a physical location or a link to a web site. The problem for someone with little or no experience with these older sources is having a broad enough knowledge of the era, location, family, etc. to be able to judge whether the record applied to the correct individual. Without it they would have to rely on someone else's opinion. For example, there may be two persons in this locality, township, parish, or county with the same name, one with less than 50 acres and the other with over 400 acres. Would 4 horses and 12 cows be too many for a small farm or obviously too few for a large farm? My grandfather ran a few dozen head of horses and a few hundred head of cattle on two sections (1240 acres) in the 1940's & 1950's in western Nebraska. I have no idea how that might compare to Virginia in 1787. How do you decide which person this record should be attached to? 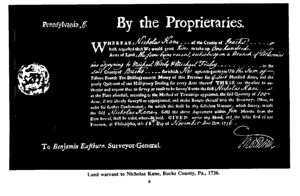 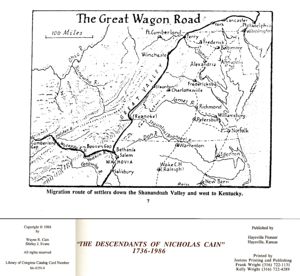 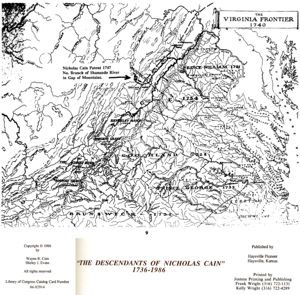 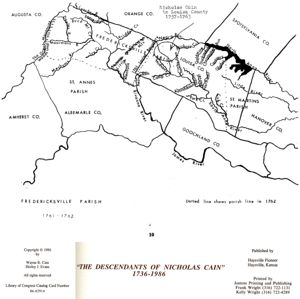 Will of Nicholas Cain 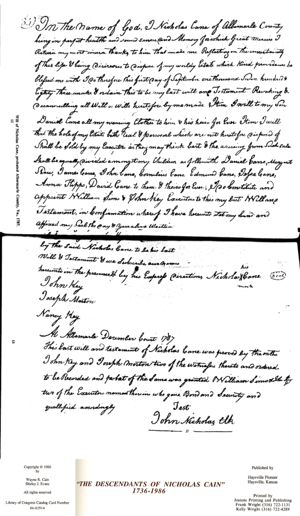 Steve Lake
The next addition to this free space page will be DNA. This may be a challenge to present. This may be entirely incompatible with the stated purpose of presenting a published book. We may not be able to predict how successfully it may work without just trying it. The hope is that DNA will provide another way to test the reasoning and conclusions found in the book. This may also allow opposing theories to be compared and analyzed.
posted Jan 17, 2018 by Steve Lake

Steve Lake
Image files from four Genealogy Society publications have been uploaded. These are presented as examples of where some of the various theories for the origin of Nicholas Cain may have come from.

I find it very helpful to see these all in one place so that they can be compared and analyzed together instead of separately or one at a time. Several contributors having only one of each of these is how we ended up with a composite of three unique individuals. Seeing all of these theories at once is, I believe, compelling evidence that having three separate profiles is necessary, not just from the standpoint of being right or wrong, but having them separate opens the door to new info being found for each of them, without the limitations that define each one influencing the others.